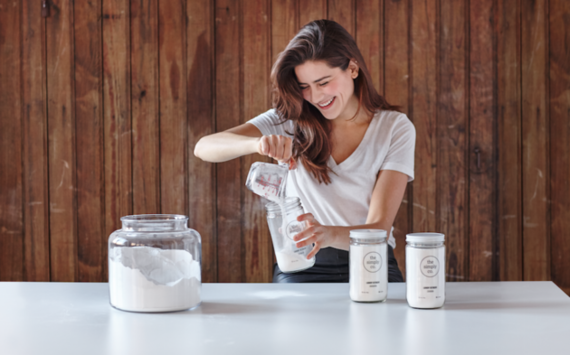 Can you imagine fitting all the trash produced over two years in one small jar? While it might seem impossible for the average American, who generates around 4.3 pounds of waste daily, Lauren Singer has produced almost no trash for the past two years, by leading a zero-waste lifestyle. A 26-year-old New Yorker, Lauren is the founder of a blog, The Trash is For Tossers, where she shares helpful tips to people interested in her lifestyle, and of The Simply Co., a company focused on producing sustainable detergent. This year, Lauren is working to build her company, by expanding her line of cleaning products and deliver to more parts of the country.

In the Unites States alone, 55 percent of 220 million tons of waste end up in one of over 3,500 landfills each year, with metropolitan solid waste landfills being the second largest source of human-related methane emissions. Lauren hasn't sent any trash to the landfills since 2012. Instead, she has been storing her trash in jars, proudly displayed on her blog. The decision to transition to a zero-waste lifestyle started for her, while she was an environmental studies student at New York University. In her senior year, she felt constantly upset and angry seeing one of her fellow majors bring lunch to class every week in plastic bags and plastic takeout containers, which would all be thrown out, rather than recycled. One night, after class, while still upset with her classmate, Lauren went home to make dinner and realized that everything she had in her refrigerator was wrapped in plastic, from the lettuces and tomatoes to the pre-made rice dishes and condiments. 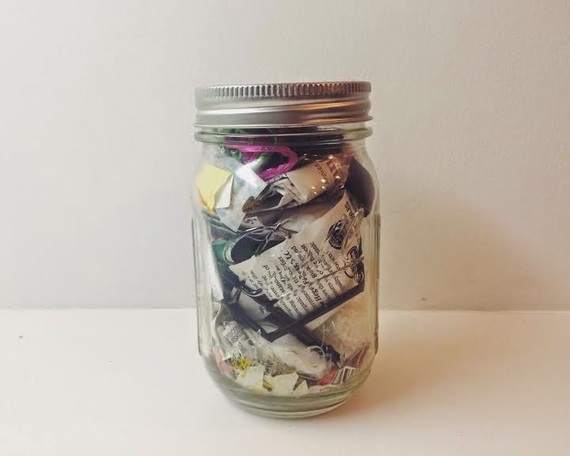 As any concerned environmentalist, Lauren realized that there was a lot to object in the excessive use of plastic. A ubiquitous synthetic material, plastic is harmful for the environment and human health. Accounting for 10 percent of generated waste, most of which is disposed of in landfills, plastic contains chemicals that are absorbed by the human bodies, some of which have been found to alter hormones or have additional potential human health effects. Marine animals often ingest plastic debris floating on the seas' and oceans' surface. As plastic is not biodegradable and lingers for decades in the landfill, its chemicals often infiltrate the soil, contaminating groundwater. At the same time, plastic production is a substantial consumer of fossil fuels. Around eight percent of world oil production is used in manufacturing plastics. The amount of plastic produced in the first ten years of the 21st century will approach the total produced throughout the entire 20th century, with yearly rates in plastic production increasing at about nine percent per year.

Realizing how much plastic she had been using herself, Lauren suddenly understood it had been hypocritical of her to judge her classmate. She decided to stop using the manmade material not just in the kitchen, but in all areas of her life, from her cleaning products to the clothes she wore.

In preparing herself on how to achieve her ambitious new goal, Lauren discovered the Zero Waste Home blog, created by a family of four in California, who were producing little to no waste. She left confident that, if an entire family could commit to a zero waste lifestyle, a single young woman in New York could do it as well. She was also inspired to start her own blog, Trash is for Tossers, to document her transition and help spur a dialogue on environmentally responsible lifestyles.

In our interview, she stressed that her transition consisted of incremental steps: "At first, I stopped buying packaged products and began bringing her own bags and jars to fill with bulk products at the supermarket. I started only buying secondhand clothing." The young New Yorker also downsized her apartment, by selling, donating or giving away superfluous things in her life. She gradually started making her own personal care and cleaning products: "At first, I made my own toothpaste out of natural ingredients. Realizing that natural products worked and that I could efficiently make them myself gave me the courage to continue. When I ran out of shampoo and conditioner, I learned how to make natural ones myself. The same for body lotion, scrubs and detergent." For some of her products, she made YouTube videos, which she posted on her blog, for people, who would like to create similar products, but might not know where to start.

After a year of posting on her blog, she realized that many of her readers loved the idea of toxic free and sustainable cleaning products, but did not have the time to make them themselves. They wanted to know what store products that were as sustainable as the homemade ones. Lauren started comparing commercial cleaning products, reading their labels and researching their properties. She realized that, while cleaning product manufacturers are not legally bound to list their ingredients on their packaging, there are 85,000 industrial chemicals being used, the majority of which are not tested for safety. 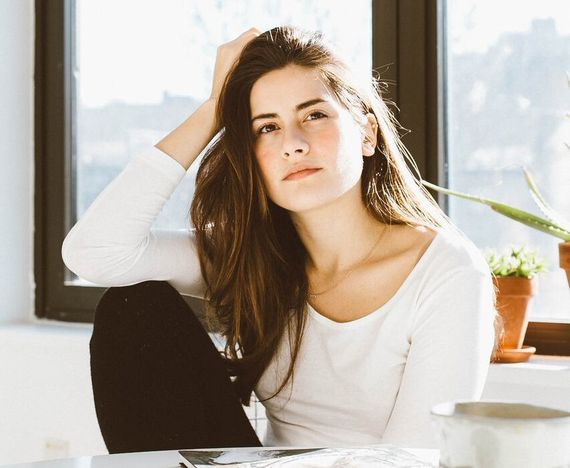 Lauren decided to start The Simply Co., her own company producing handmade organic, toxin free laundry powder detergent. She only uses three ingredients: organic baking soda, washing soda and organic, vegan castile soap. Among the list of avoided substances were petrochemicals, chlorine and phosphates, usual suspects in commercial detergents. She added organic essential lavender oil to create a scented laundry powder as well. Until the beginning of this year, Lauren was making all the products herself in her apartment. Due to increasing demand, it became a strenuous activity, taking up most of her days, and preventing her from posting on her blog as much as she would have liked to.

To be able to meet the demand and focus on what she is best at and most passionate about, Lauren decided to hire a team of people, including a COO, to help build the company. Her team is scattered around the country, as their meetings take place online. While all team members are all environmentally-conscious and lead plastic free lives, they are not leading zero-waste lifestyles. When discussing people's life choices, Lauren stressed: "I would never impose my lifestyle on anyone else, whether it be coworkers, friends or family. I respect everyone's personal decisions and don't go off telling people about how I live unless they ask and are interested. However, if we ever were to have a physical office, I would make it zero-waste."

Apart from building a team, she has also moved product manufacturing in a few different locations in the country to expand production and make the shipping process quicker and less expensive. While growing her business, Lauren wants to maintain it sustainable and environmentally responsible, so she has become knowledgeable of the current problems of the production process, which is excessively wasteful toxic-laden, endangering both the workers and the consumers. With The Simply Co., she is keen on avoiding these issues and declared: "I am very happy to have found production teams who are willing to follow my rules and expectations."

Since starting her zero-waste lifestyle, Lauren believes that the overall quality of her life has improved: "I feel healthier and eat much better." With prepackaged foods out of the picture, she eats a lot of organic fruits and vegetable, bulk grain and seasonal local produce, when farmers' markets are available. She is also spending less and saving money: "When I go shopping, I now always have a grocery list, which means I am not grabbing unneeded or expensive items impulsively. Since I buy food in bulk, I don't have to pay a premium for packaging. I also buy my clothes secondhand at a heavily discounted price."

Apart from building her company this year, Lauren hopes to post more on her blog and YouTube Channel, write a book and maybe have a television show. Nothing is set in stone, as she is open to what life brings her way: "If you would have told me while I was working at my governmental job that, in a couple of years, I would be running my own company, I would not have believed you." One goal remains constant and clear: she is committed to continue chipping away at society's overwhelming consumerism and its dire consequences on the environment and human health. Lauren hopes that "more people will become aware of the fact that leading a low-impact life doesn't preclude being fulfilled and happy. On the contrary, it enables it."