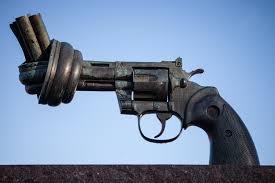 I don't even know what to say anymore. I have no more words, thoughts or prayers to offer in the wake of the Orlando shooting. None of us can adequately describe the magnitude and horror of the events of this week or the loss experienced by the GLBT community in Orlando and around the world.

The same sad music played for breaking news, President Obama made an eerily similar statement about the senseless attack and blame was shifted as to why the shooting happened in the first place. Wash. Rinse. Repeat. Anger, sadness, and shock are everywhere. A striking moment that defined this sadness is when Anderson Cooper read the victim's names on-air while choking back tears through his entire broadcast. The worst part of this week was the palpable hopelessness around stopping gun violence.

Everyone has a degree of connection to the Orlando shooting. For me, Florida is my home state and my father's business is seven minutes away for The Pulse nightclub where the shooting took place. One of his employees survived the attack physically unscathed but is emotionally having difficulty. Also, my Facebook feed is flooded with posts from friends who live in the Orlando area and are connected in some way to the tragedy.

To make sense of what has happened, I write. I have nothing new to say, others have not already shared, but I still write. I hope in the face of hopelessness we will take action to ensure this never happens again. There is some comfort that people are still fighting and hoping for change and have provided overwhelming support for Orlando and the GLBT community.

But exasperation over the failed attempts to stop these shootings is ever present and for good reason. Mass shootings are now common and we all can easily remember Charleston, Aurora, Tucson and Newton just to name a few. Just take a look at the University of Southern California School of Social Work's infographic detailing a timeline of 182 school shooting since Sandy Hook, including at my alma mater Florida State University and the latest event at UCLA on June 1. This week's Washington Post article The Math of Mass Shootings details 126 events (which four or more people were killed) since 1966 which took place at churches, workplaces, schools and military bases. It's worth noting, the 244 guns used in these events, 140 were obtained legally and 39 illegally.

We know the statistics well, but the reasons why gun violence occurs and how to prevent it no one agrees upon. One reason is the lack of research. Did you know in 1997 the Centers for Disease Control was barred from doing research on causes and prevention of gun violence? It wasn't until President Obama issued an executive order after Newtown to loosen the ban and ordered the CDC to start collecting research. But two years after the Newtown tragedy, this order still has not spurred the CDC to start gun violence research even though the medical profession views this as a major public health concern. The January 2015 Washington Post article, indicated funding was still tight at the CDC and this ban has instilled fear in the academic community and other research institutes from diving into studying this issue. Without research-informed policy we are truly adrift from preventing gun violence.

"There is no logical reason in the world that our choices in a democratic free society should not be built around solid research data on how to prevent injury, fear, and the loss of life surrounding the ease of access and availability of weapons," said Ron Astor, MSW, PhD, school violence expert and professor at the University of Southern California School of Social Work. "The idea that conducting research on gun violence is against the second amendment is a red herring. There is NO conflict between the second amendment and making research-based rational decisions based on strong science to curtail dangerous situations to reduce the loss of lives."

Although the CDC's muscle has been muted, we do know some facts around gun violence that can still guide better gun laws. First, only 4 percent of all gun violence in the U.S. can be attributed to people diagnosed with a mental illness with nearly two-thirds of this number related to suicide. It's hard for people to believe this statistic given the headlines but it's an important distinction to be made that most mass shooters are not mentally ill and treatment can't help a sociopath who has a truly dark and evil soul.

Secondly, the best predictor if someone is to perpetrate gun violence is past violent behavior such as domestic abuse and violent crime. In 2013, The Consortium for Risk-Based Fire Arms Policy's Evidence-Based Approach for State Policy Report pointed to several key risk factors associated with firearm violence, including violent crime, domestic violence, and alcohol and substance use. Also, between November 30, 1998, and Dec. 31, 2010, nearly 600,000 gun purchases were prevented because of criminal records, including misdemeanor crimes and domestic violence convictions, which represents about 73% of The National Instant Criminal Background Check System (NICS) denials. But yet there are still massive problems with reporting to NICS.

In the wake of the Orlando shooting there is a confluence of reasons; hate against gay people, terrorism, and radicalization inspired by the Internet, a self-loathing gay person lashing out, pure evil, and gun control policy failures. Let's just say it's all of the above. We may not be able to stop or control all of the factors which contribute to gun violence or the bigotry someone holds in their hearts, but we must expect and demand that someone who was once on an FBI watch list should not be able to legally buy an AR-15 semi-automatic rifle with this gun's only purpose is for mass killing.

As people search for answers to curb gun violence, it's an easy conclusion for me. There are too many guns and it's too easy for the wrong people to get them. Let's stop talking and do something to stop this violence. How to Help Orlando, Huffington Post

Every Town for Gun Safety, Gun Violence by the Numbers