I suppose it's no surprise that Vice President Joe Biden was put in charge of President Obama's gun control initiative. Biden has always been an innovator when it comes to finding new reasons to put people in prison, and for longer periods of time.

He's also long been a law-and-order guy. Back in 2009, he assured a gather of prosecutors and police officers that Obama Supreme Court nominee Sonia Sotomayor "has got your back" -- a stunningly tone-deaf thing to say, given that a Supreme Court justice is supposed to protect and uphold the Constitution, even if that means occasionally ruling to limit the power of law enforcement. (Fortunately, he was wrong. Since her confirmation, Sotomayor has arguably been the Court's most reliable defender of the rights of the accused.)

Biden has also long been a champion of the federal COPS and Byrne grant programs that have contributed to the massive rise in SWAT teams across the country -- and have given rise to drug war debacles like those in Hearne and Tulia, Texas. Obama and Biden campaigned on refunding both programs and indeed, under the Obama administration both programs have been funded at record levels.

Last week, Biden again invoked the law-and-order theme in calling for a federal ban on assault weapons. From USA Today:

Participating in what was billed by the White House as a "Fireside Hangout" on the website Google+, Biden acknowledged that assault weapons account for a small fraction of gun deaths in America. But, he said, law enforcement organizations overwhelmingly support the ban for good reason.

That last sentence simply false, on both counts. So is Biden's general premise.

Let's look first at police fatalities. Were there really fewer police being murdered during the assault weapons ban?

Well the ban went into effect in 1994. It expired in 2004. But last year -- eight years after the ban expired -- was actually the second safest year for police officers in America since the early 1960s. The safest year since the early 1960s was 2009 -- also well after the assault weapons ban expired. The 2001 terrorist attacks were of course an anomaly. There was also an isolated spike in 2007. But as you can see from the graph below, on-the-job police officer fatalities have been in steady decline since the late 1970s. The assault weapons ban doesn't appear to have affected the trend either way. 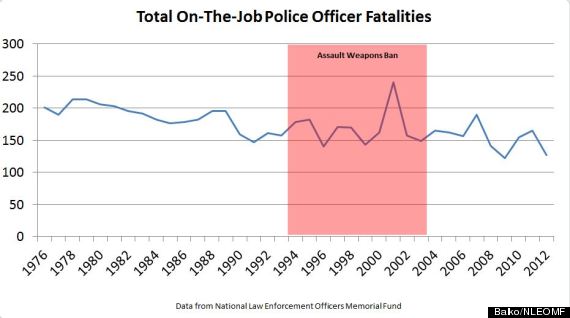 By the way, these are raw numbers. If we were to look at fatalities relative to the number of cops on the streets, or to the total number of police man-hours worked, the downward slope would be quite a bit steeper.

The figures above come from the National Law Enforcement Officers Memorial Fund. But they do include deaths caused by car accidents, heart attacks and other natural causes, and other factors not related to guns. So let's just look firearms-related fatalities. Here the data comes from the FBI's Uniform Crime Reports. And once again we see that the job of police officer has generally gotten safer, by this particular measure starting in about the early 1990s. That jibes with the start of the fall of the overall crime rate that we've seen over the last 20 years. And again by this measure, 2012 was one of the safest years on record for police officers. There was a slight uptick in 2008-2011, but that also came after a record low in 2007. 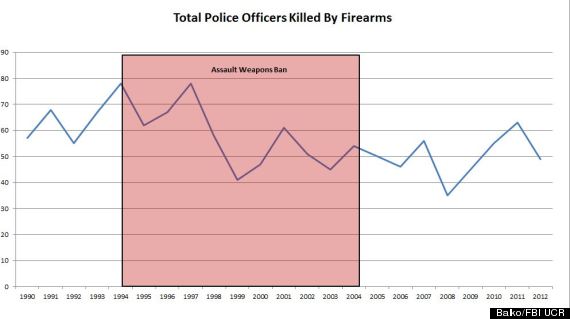 But even these figures include all varieties of firearms. As far as I know, the FBI dosn't specifically keep track of how many cops were killed by "assault weapons" -- probably because the term itself is subjective, and is more an assessment of cosmetic features than firepower or capacity. But we can do one more selection, and look at only police fatalities that were caused by handguns. If Biden is correct, we should expect to see the percentage of police fatalities caused by handguns to increase during the assault weapons ban, and to decline after it expired. This is still crude. Most rifles -- including the overwhelming majority of those used to kill -- aren't considered assault weapons. And there are a few types of handguns that are. There's still no discernible effect from the 10-year ban. (The data for 2012 aren't yet available.) 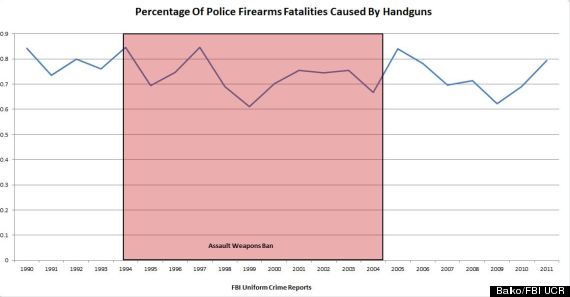 It's also worth noting that we're talking about less than 100 annual murders here, and in recent years it's often been less than 50. That's out of approximately 600,000-700,000 cops on the street. I've pointed this out before: the good news here is just how safe it has become to work as a police officer in America. You're more likely to be murdered simply by living in many large American cities* than you are to be murdered while on the job as a cop. And the odds of the latter happening specifically by way of an assault weapon are vanishingly small.

Back in 1997, the Second Amendment scholar Dave Kopel looked at data from 1975 through 1992, and found that "there were 1,534 police officers feloniously murdered in the United States. Of these, 16–slightly over 1 percent–were killed with 'assault weapons.'"

The fact is, what Biden calls assault weapons are used in a very small percentage of weapons-related crimes overall. Which means they're unlikely to be what your run of the mill bank robber or drug dealer has handy if he suddenly finds himself in a shootout with police. It's also worth keeping in mind that most such run-of-the-mill criminals don't want to get into shootouts with police. Drug dealers keep weapons to protect their supply from other drug dealers. Most know that if you shoot a cop -- or even shoot at a cop -- the best outcome you can hope for is to spend the rest of your days in prison. You'll be lucky to survive the next several seconds.

Of course, there will inevitably be some incidences in which disturbed people set out to kill cops just for the sake of killing cops. But it seems rather unlikely that someone of that mindset would avoid using an assault weapon in the crime he's planning because to use one would be illegal.

The other trend that puts the lie to Biden's comments is that police officers themselves have grown increasingly heavily armed over the last 30 years. Cops aren't outgunned at all. Not only has there been a massive growth in the number and use of SWAT teams since the early 1980s, but patrol cops are also more likely to carry weapons with higher-capacity magazines and higher-caliber ammunition.

In fact, just a few days after Biden's Google+ hangout comments, the Atlanta Journal-Constitution published a report on the Pentagon bounty acquired by Georgia police departments under the federal 1033 program, which has sent millions (yes, millions) of pieces of surplus military equipment to domestic police departments across the country.

Among the paper's findings:

•The Waycross Police Department, which has two armored personnel carriers and 16 M15 rifles.

•The Cartersville Police Department, which has an armored personnel carrier and 17 M14 rifles.

•The Doraville Police Department, which has an armored personnel carrier.

•Clayton County PD, which has a helicopter, an armored truck, 11 M16s and five M14s.

•Cobb County PD, which has an armored truck, 106 M16s and eight M14s. Cobb also has a second armored vehicle, which it bought using federal grant funds.

Newspapers across the country have been publishing reports like these for years. Police departments are also getting grenade launchers, tanks, and guns that shoot .50-caliber bullets.

In fact, the 1033 program has set new records under the Obama administration. In FY 2011, the program gave away more than $500 million in military equipment. That's $100 million more than it had given away in any previous year.

And even the 1033 program is dwarfed by the flush of money the Department of Homeland Security has also been spending to arm America's police departments. The Center for Investigative Reporting published a survey in December 2011 which found that DHS has given away more than $31 billion in grants to local police departments since 2001, which the agencies have used to purchase armored personnel carriers, body armor, semiautomatic weapons, and other military-grade gear.

Biden is flat wrong, here. The troubling thing is that he's either ignorant of all of this, or he's aware of it and knowingly perpetuating a false premise, anyway. Neither scenario suggests the administration is all that interested in an honest, thoughtful discussion of these issues.

(*Which themselves have become increasingly safe, with a few exceptions.)