You can often see whales and dolphins from fine vantage points atop cliffs and bluffs, and the plain shoreline. But if you really want to get up close and personal, down and dirty, or whatever with them, board a boat.

No need to wet your toes, let alone scuba or snorkel, to see their ostentatiously breath-taking aerobatics as whales breach and dolphins leap out of water in wonderfully synchronised, wheeling arcs. 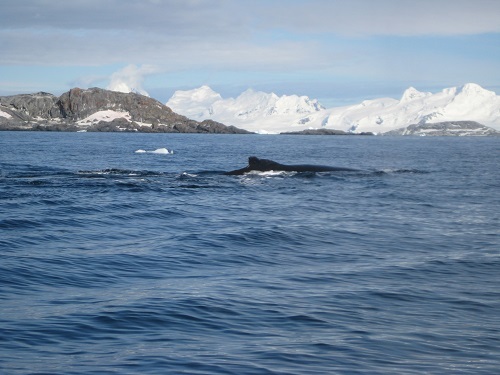 These marine mammals, in their various sub-species and genera, really are denizens of the mythical seven seas, ranging the entire planet from the Arctic to the Southern Ocean via all tropical and temperate waters in between.

Graceful and elegant as they are, their closest living relative is the ungainly hippopotamus, from whom they diverged some 40 million years ago. 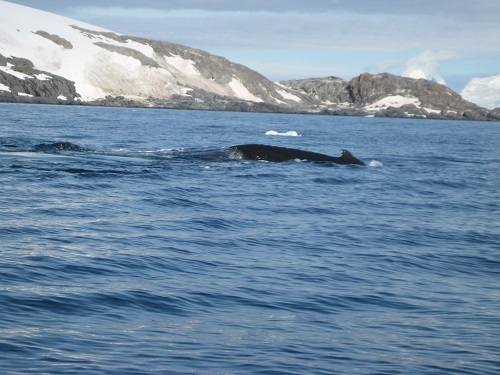 Here are just some of the places where they've been encountered on the Looney Front.

We're on a cruise, landing on Useful Island - no, I can't find out why it's called that - just off Graham Land on the Antarctic Peninsula. Rivka, my wife, stays on shore by the zodiac as I clamber up a steep snow gulley and decide to toboggan back down on my bum. 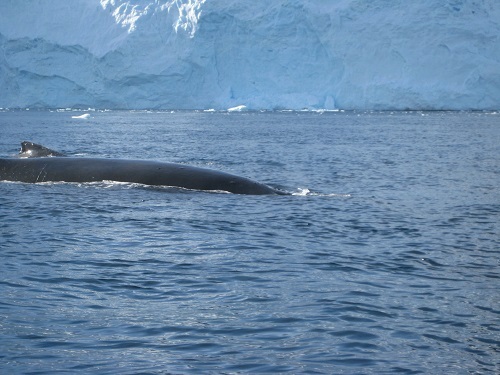 But the snow keeps on balling up underneath me and I have to do a bum-dragging crab crawl. All the others thank me for having made a great smooth slide for them.

Rivka turns round the wrong way to re-board and three of us help to haul her out on dry land. I almost fall flat on my face in mountains of penguin poop. The zodiac is full, so I get on the next one. 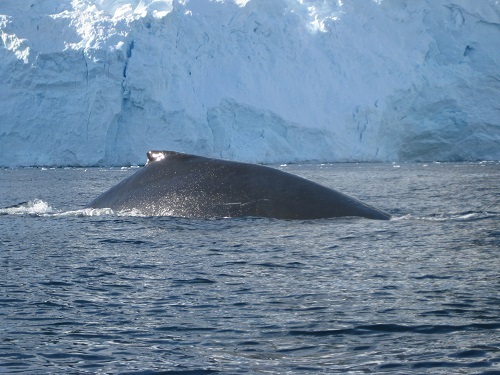 Mariano, the pilot, sights a pod of humpback whales by their spouting, way off in the distance under a huge glacier. We can´t see anything, but he´s roaring off away from the ship, mock-torpedoing icebergs on the way. At last we reach our humpbacks. 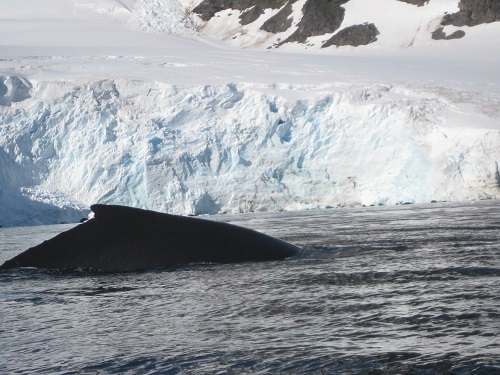 There are four of them. They´re humongous. None breaches but they dive deep, flailing their giant tails, then undulate their huge backs and dorsals out of the water. 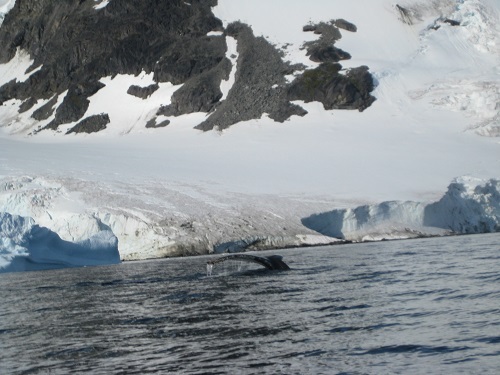 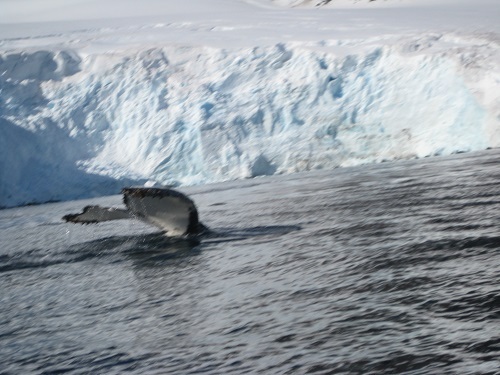 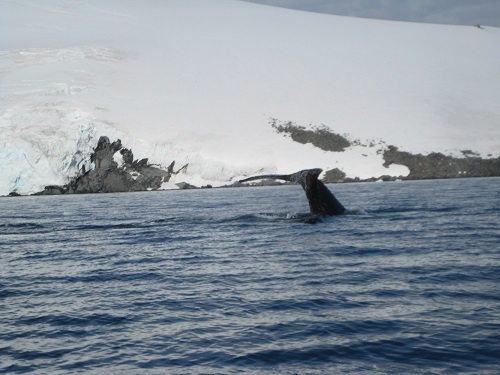 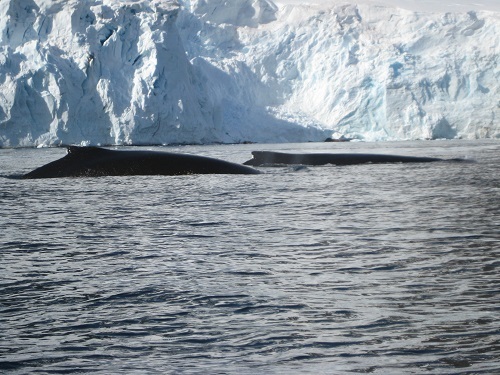 Rurutu in the Austral Islands, 360 miles south of Tahiti, is on the humpback migration path as females move south with their recently born calves. We're on a tiny motor boat rock' n' rolling all over the South Pacific, and one of us has just bellowed 11 o'clock.

But what he has sighted at the very spot where 11 would be on a clock face - if we were on a clock face and not on the Dramamine-necessitating rock 'n' rolling South Pacific - turns out to be not a giant humpback but the cusp of a huge wave. 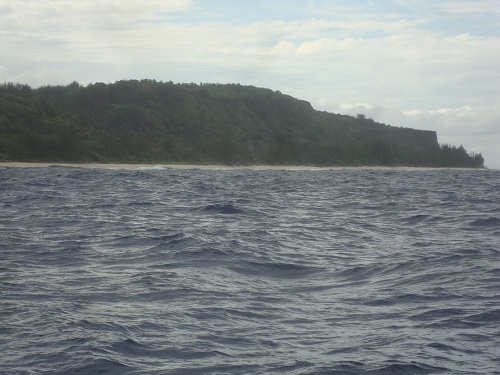 No, that's a wave

Now it's Yours Truly's turn. Over there! 4 o'clock, shouts I. Oy Vey! I've just zeroed in on the heads and flippers of a couple of snorkellers.

There! Over there, shouts the captain. 1 o'clock! This time it's the real McCoy, a giant grey back arcing through the water, a huge tail emerging from the waves, then smacking back down. Of course, by the time I manage to get my camera out I take magnificent photos of miles of empty water. 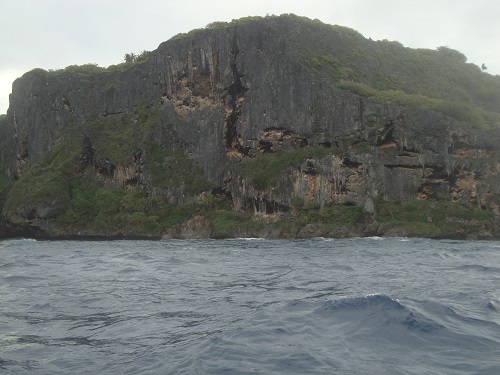 Likewise with the next. And the next. Further down the coast a mighty whale breaches. A mighty splash, a mighty fumble with my camera, and she's arcing back into the waters with her calf as at last I get the camera aimed, followed by numerous water spoutings along her majestic path. But I do hear the hiss as they expel water from their water holes. 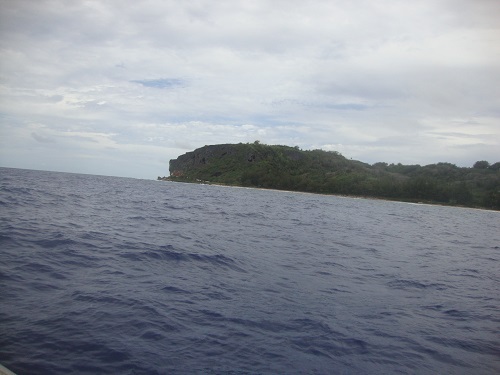 Disgusted with my Robert Capa moments, I concentrate my photographic skills on the island - miles of coral cliffs pocked with grottoes, topped with lush vegetation soaring precipitously above miles of white sand. At least it's not moving. 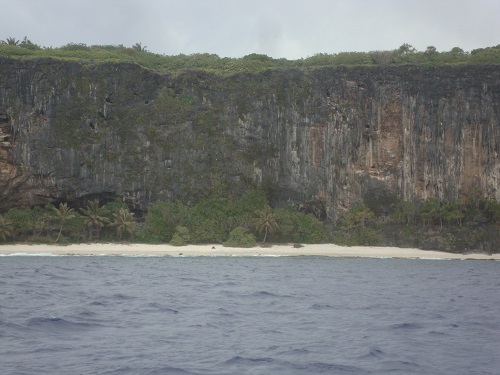 Who'd have thunk it! There, on one of my landscape works of art appears a giant grey back that I didn't even see arcing through the wavelets. 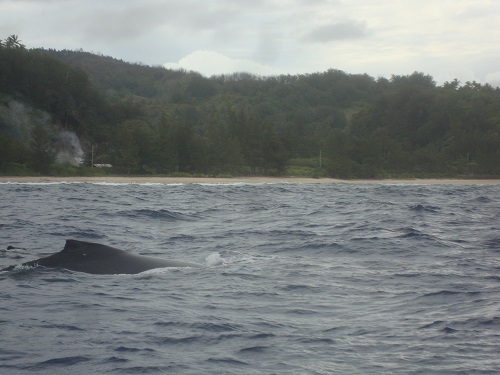 If you want to see whales, you could do worse than cruise up Alaska's Inside Passage to Icy Strait. Amid magnificent scenery of ice-capped craggy peaks, deep green fir-carpetted mountainsides, hundreds of islets and gleaming channels of water flowing in between, whole groups of humpbacks spout up plumes of water, their sleek black backs humping out of the ocean. 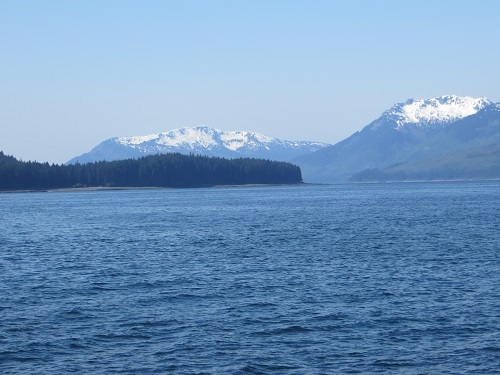 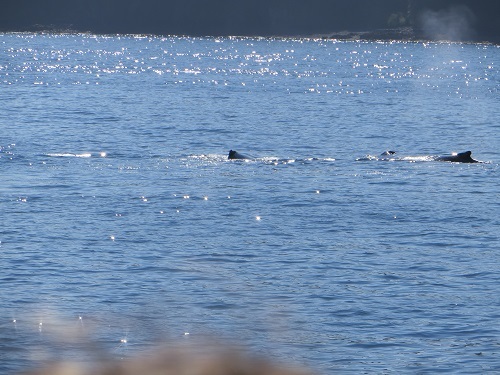 The flukes of their tails surface and crash in spray onto the ocean surface as they dive back into the deep. Of course, my usual luck rules supreme. Every time I get my effing camera focussed and press the button, the fluke has already disappeared beneath the waves. 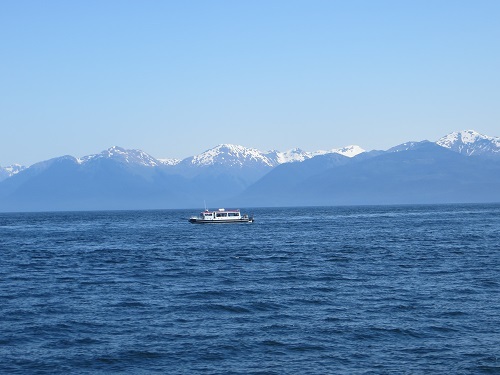 Time and again, time and again... But wait a mo, I've actually captured on my digital the tail end of a tail end while targeting something else entirely - the snow-capped peaks behind. Gotcha! 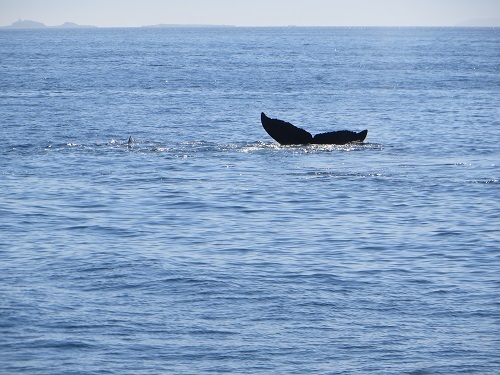 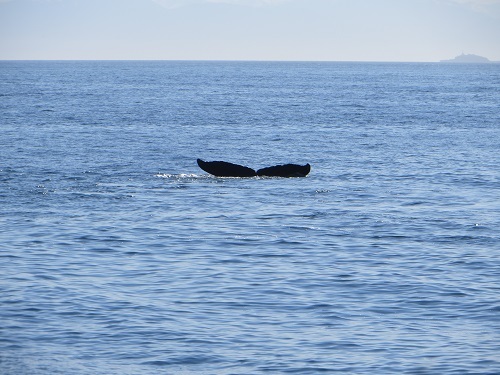 Let's not forget the Aloha Islands and the magnificent boat trips around their rugged shores. Among the most spectacular is Kauai with the incredibly crumpled mountain crags, fluted escarpments and vast green valleys of its northwest Napali coastline. 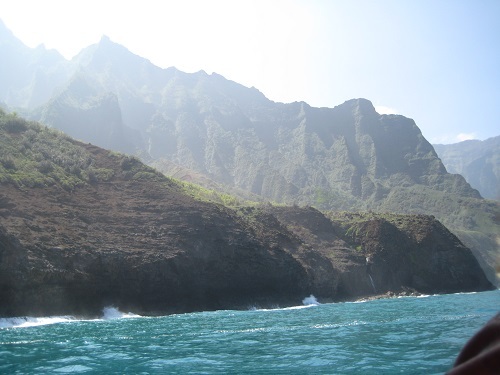 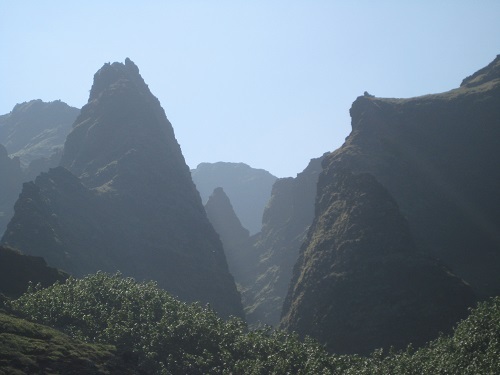 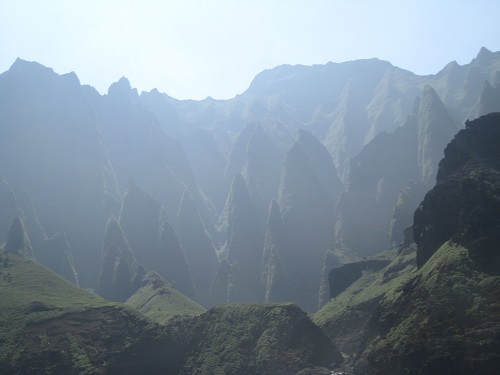 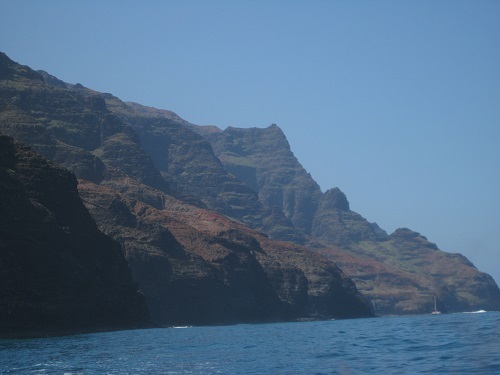 Take a zodiac to see humpbacks breaching and schools of dolphins playing, and you won't be disappointed. 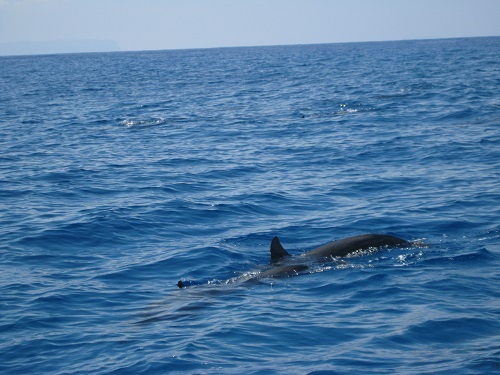 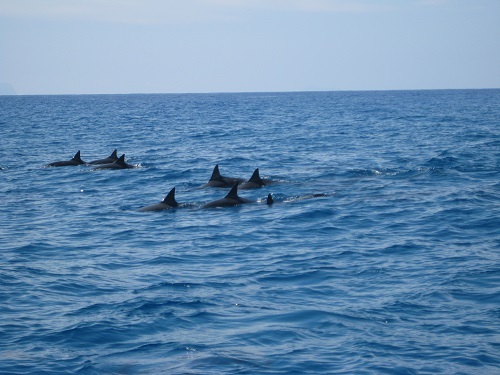 Encircling remote St. Helena, Napoleon's exile pied-à-terre isolated in the middle of the South Atlantic, take your Dramamine as you boogie past the creased rugged folds of cliffs rising almost perpendicularly from the bright blue ocean - stark, forbidding, with barely a hint of the lush green interior but for a narrow green channel snaking down a craggy ravine.

Phantasmagorical sea stacks and jagged volcanic plugs loom up off shore, and yes there they are - a huge whale and her calf, a massive flipper high above the waves, an enormous tail crashing down, again and again. And I crash into the wide fat bum of a lady blocking the rail as I go for my Robert Capa moment. Well, let's just say I don't lose the camera overboard. 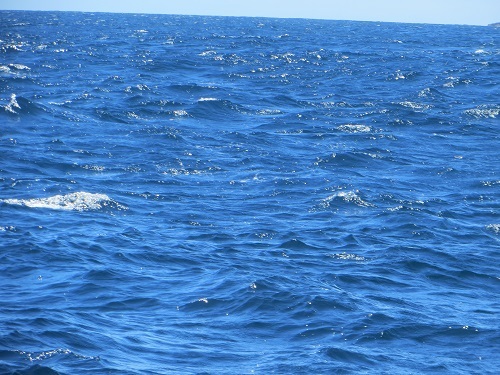 Next, pods of dolphins, dozens of them, circle the boat and arc out of the water like flying fish as they put on an ostentatious show of total exhibitionism. 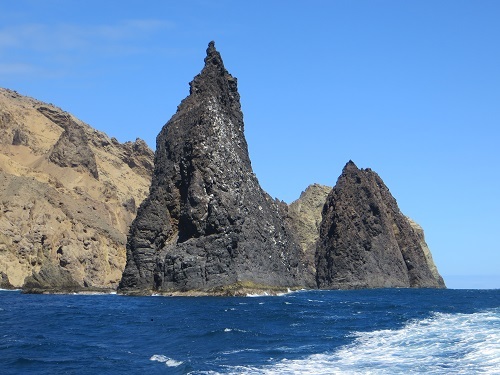 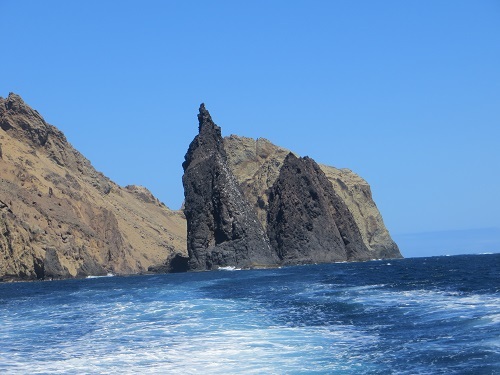 [Upcoming blog next Sunday: Animal Planet on the Looney Front - Creatures of the Sea, Section III, See Fish in the Sea Without Getting Wet]