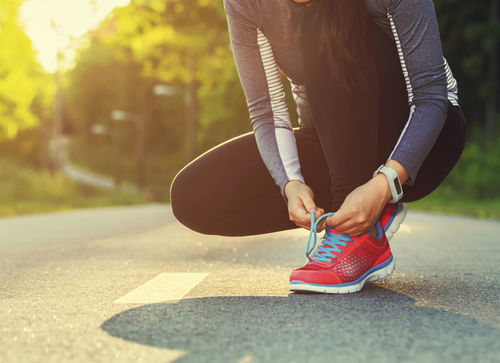 The first time I ran, like really ran, was during middle school gym class. It took me 11 minutes and 47 seconds to finish a mile. I've been running ever since, but for all my 6 a.m. alarms and 0-degree jogs, my mile time has not improved much.

More from The Stir: 5 Running Tips That Will Make Your First Race a Breeze

Don't ask me why. All I know is this: As much as I hate running, I love being a runner.

On days that I run, I exert myself purely for exertion's sake. If you run too, you get why.

When you're a runner, your people are the girls with hair elastics on their wrists and the boys with shorts shorter than yours. They might be better, faster or stronger than you, but you belong with them.

More from The Stir: How Running Rocks for Your Mind & Body, According to Women Who Love It

It took me almost 10 years of plodding along at an 11-minute mile before I realized that I could call myself a runner, no matter how slow I go or how many races I lose.

I've laced up my shoes at least once a week since the first day I stepped foot on a track in middle school. Some weeks it's every day, some weeks it's not. Some days, I'll barely go more than a mile, and some days, I'll walk more than I jog. I may not have medals, but I have fresh air, time alone, and creaky knees and tight quads.

US Presidential Election 2020
Breaking news, analysis and the latest polls on the presidential race from HuffPost’s politics team
See More
More:
healthy livingrunningexerciseFitness and Exercise
Newsletter Sign Up
The essential guide to taking care of your mind and body
Subscribe to HuffPost’s wellness email
Successfully Subscribed!
Wellness delivered to your inbox