On subway trains and platforms across New York City on Sunday, there were awkward grins, wide-eyed stares and double-takes galore as thousands of straphangers strolled about pantless for the annual “No Pants Subway Ride.”

Donning varying types of underwear, most participants were otherwise bundled up in winter-appropriate clothing and accessories like fur coats, scarves and knee-high socks. At 10 a.m. on Sunday, the temperature in some parts of New York was a bone-chilling 32 degrees.

Charlie Todd -- founder of comedy collective Improv Everywhere, which organized the pants-free ride -- told The Huffington Post that some 4,000 people participated in the event in New York City. The ride, which has become something of a global phenomenon, also attracted participants in more than 60 cities in 25 countries worldwide, he said.

Todd himself participated in the pantless event. Spot him in the video above at 0:32, underwear-clad and toting his 7-month-old son.

“I think part of [the event’s appeal] is that it's just such a simple idea,” Todd told HuffPost. “Everyone can get on board with people riding the subway pantless in the middle of winter. The juxtaposition of the winter coats, hats and gloves with bare legs is something that's immediately striking.”

The first “No Pants Subway Ride” was staged in January 2002. It started with just seven people, said Todd, adding that he never imagined the event would eventually grow into “an international holiday.”

Watch snippets of the “No Pants Subway Ride” (and the priceless reactions to the event) in the video above. Click through the gallery below to see snaps from last year’s event.

PHOTO GALLERY
No Pants Subway Ride 2014 In NYC
Download
Calling all HuffPost superfans!
Sign up for membership to become a founding member and help shape HuffPost's next chapter
Join HuffPost 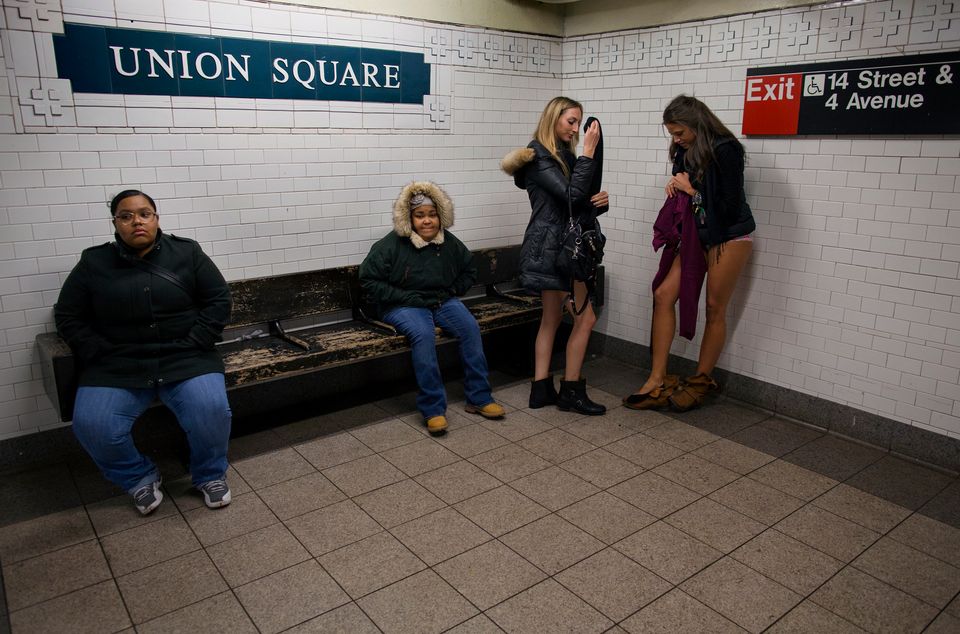 1 / 37
Marianne Cornejo, far right, and Leah Estreicher, center right, both of New York, start to get dressed at the Union Square subway station after participating in the annual No Pants Subway Ride, Sunday, Jan. 12, 2014, in New York. The staged event, organized by the group Impro Everywhere, invited people onto the subways without pants to act out what might be a normal commute. (AP Photo/Craig Ruttle)
AP