Mohammed's* house is falling down around him. Dampness and mold have invaded his walls, his roof is crumbling over his family's heads, and he desperately needs to fix it before winter arrives. The dampness is caused by improper insulation, as well as a bathroom built into the corner of his kitchen. A small window provides the joint toilet/shower's only source of ventilation, and it opens directly over the kitchen area, leaking not only moisture, but also the odor from an open squat toilet shared by nine people. The roof can be fixed with a concrete casing, the bathroom requires a door and outside vents, and the broken windows and doors must be sealed against the elements to stop the home's deterioration.

Mohammed cannot afford the necessary upgrades to his home because he is one of the nearly 630,000 Syrian refugees currently residing in the Hashemite Kingdom of Jordan. Of these refugees, 85 percent live outside of the country's refugee camps, and 99 percent lack a permit to work legally. Known as urban refugees, the greatest challenge they face when they arrive in Jordan's cities and towns is securing access to adequate and affordable shelter, especially without a legal source of income. Mohammed's troubles with his rented home are not unique, and tens of thousands (if not hundreds) of Jordan's urban refugees currently reside in substandard or inadequate shelters. 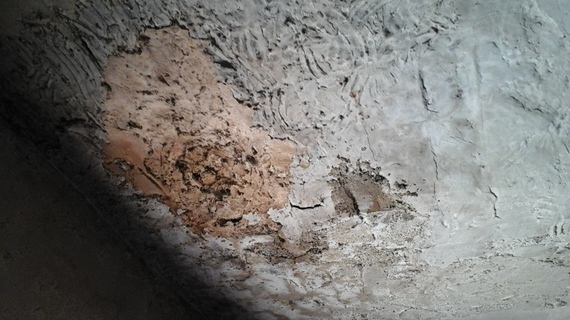 Sections of Mohammed's roof are falling away due to dampness and mold.

Urban refugees in Jordan consistently cite housing as their primary concern, and cash-for-rent and construction assistance from both domestic and international organizations provides a vital support system as refugees seek to reestablish their lives. But in Jordan, the government has suspended all urban shelter projects since early 2015, and organizations attempting to house Syrian refugees cannot even provide cash assistance, let alone make upgrades such as those Mohammed's home requires. As urban refugees struggle to pay rent, they are forced into substandard housing that threatens their families' health, access to education, security, and overall wellbeing.

I visited Mohammed's home in June 2015 with an NGO** that provides shelter assistance, among other areas of humanitarian aid. Due to the government suspension, NGOs in Jordan can only work within narrow confines to improve the shelter situation: they can continue education programs about housing and property rights, and they can perform home assessments like this one, in the hope that the suspension will soon be lifted and projects will resume. In total, between the repairs to the roof and broken windows and upgrades to the bathroom, Mohammed's house requires 900 Jordanian Dinars in funds (about 1,200 USD) to be considered habitable, albeit at a very minimal level. Ordinarily, the NGO would move forward to pay these upgrading funds in installments to refugee families or their landlords, to ensure that the money is spent on approved construction projects. Instead, due to the suspension, we leave Mohammed and his family of nine without promises, and without any idea of when or if the aid would materialize. 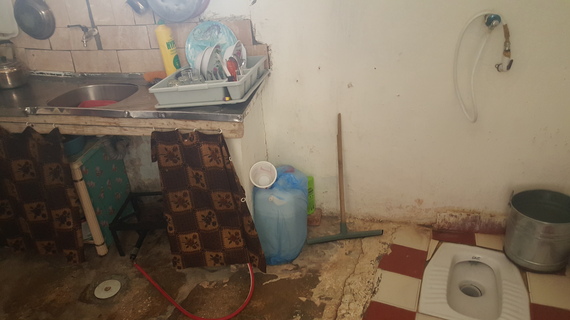 A combined kitchen and shower in a refugee home, where family members must bathe fully clothed because they do not have a shower curtain or separating wall.

The various Jordanian ministries reviewing the projects under suspension have not given a coherent reason for the sudden work stoppage. The suspension was imposed in early 2015 despite the fact that the same ministries approved all shelter interventions a few months prior, during the 2014-2015 government-led Jordan Response Plan (JRP) initiative. Some of the aid workers I spoke with think that the suspension continues due to disorganization within the ministries; others believe it is the result of a lack of political will to support shelter projects, or an unwillingness to suggest refugees may be long-term or even permanent residents of Jordan. All agreed that it is unlikely if not impossible that in a few months' time, the government had found such significant issues with shelter projects that they merited a full suspension.

Meanwhile, planning meetings for the next round of policy documents, JRP 2016-2018, have continued, and Jordanian ministries have yet to put forward any additional or alternative shelter strategies. Drafting documents is, of course, a much simpler and less politically fraught task than actually carrying policy through to completed projects, but the government has not even given a timeline of when or if organizations can continue their work this year. As a result, donors have begun pulling funding for shelter projects, and a year of work has already likely been lost.

The UN High Commissioner for Refugees (UNHCR) and NGOs have been implementing and revising several approaches to shelter provision in Jordan since the refugee crisis began in 2011. The UNHCR provides funding to NGOs to implement projects, and cash-for-rent assistance to the refugees themselves. NGOs have various levels of focus on cash-for-rent aid, upgrading substandard shelters, completing unfinished construction projects, distributing sealing-off kits, and raising awareness about housing and property rights. For populations of urban refugees, shelter is the cornerstone of aid provision and wellbeing. A refugee's work, education, familial relations, water, food, hygiene, health, and personal security are all inextricably linked to shelter conditions. Without an adequate place to call home, other interventions can only act as stopgap measures, while the physical and psychological health of entire families suffers.

Shelter provision is politically contentious in a way that food, water, and other areas of emergency aid are not. Shelter and construction imply permanence, while domestic as well as international actors typically treat refugee populations as temporary, despite the fact that the average refugee crisis now lasts 17 years. Constructing or improving housing for refugees creates tensions with the host community as well as the host government, whose low-income citizens often live side-by-side with refugees but do not receive similar levels of aid. It is a complex situation, but by no means an unsolvable one, and the benefits of increasing the housing stock to Jordan's housing market far outweigh the costs of negative perceptions of aid and refugees.

There is currently a shortage of over 48,000 housing units in Jordan, and rising rent prices caused by the inadequate supply of homes negatively affect refugees as well as Jordanian nationals. Organizations responding to the refugee crisis in Jordan also work to increase the resilience of the host community, whether by educating Jordanians about housing and property rights, upgrading substandard Jordanian homes, or completing unfinished construction projects for Jordanian landlords. The suspension of urban shelter projects harms not only Syrians, but native Jordanians as well. As one aid worker put it, "The government is not shooting themselves in the foot, they are shooting themselves in the heart."

If the suspension is not lifted soon, the construction season will give way to winter, when priorities shift to sealing-off kits and winterization of homes. Mohammed is only one of hundreds of thousands of refugees and vulnerable members of the host community in need in Jordan, and under the shelter project suspension, homes like his will continue to deteriorate, leaving his family and others like it to suffer the consequences. The (insufficient) funds the UN and NGOs have received are not being spent, sending the message to donors not to fund shelter projects for fear of wasting precious aid dollars. NGOs whose primary focus is shelter may be forced to leave Jordan altogether, to move on to a country where their assistance is welcomed. 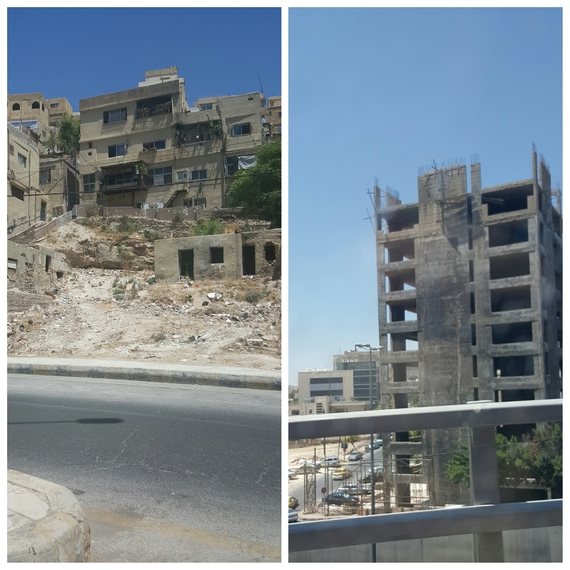 Vacant lots and unfinished construction projects are ubiquitous in Jordan, visible reminders of the housing crisis.

In Mohammed's house, the need to fix the roof, upgrade the bathroom, and seal the broken windows and doors before winter arrives is palpable. Even in the summer heat, the house is cool and damp, which will only grow worse as the cold and wet weather arrives. Without relatively minor improvements to the home, his entire family's health and security will be compromised, and the problems assessed during our visit will only grow worse. The roof itself could collapse at any moment from deterioration, and one of Mohammed's six children might be underneath it when that happens.

Mohammed's daughter Amena, seven or eight years old, follows us as we conduct the assessment. She peeks around her father's legs as he explains the problems in the home, shy around a group of strangers, but curious nonetheless. She and her siblings have been learning English, and a Playhouse Kids textbook lies open on the kitchen counter. The fridge is covered with flashcard magnets that give the English and Arabic words for different kinds of food, so that even when they eat, the children are studying. Amena's purple, sparkly t-shirt reads: "Smart Girl with Big Dreams." I can't help but wonder, growing up in such conditions, what will happen to those dreams if her family's home remains uninhabitable. Without an end to the government's suspension of shelter projects, children like Amena will need to find their own way to keep dreams alive in dark, damp, and dangerous homes.

Vicky Kelberer conducted research in Jordan in June 2015 with the support of the Boston Consortium for Arab Region Studies, a Carnegie Corporation project, and the Boston University Institute for the Study of Muslim Societies and Civilizations. *The names of the refugees mentioned in this article have been changed to protect their identities.

**NGOs and aid workers requested anonymity, given the sensitivity of these issues.