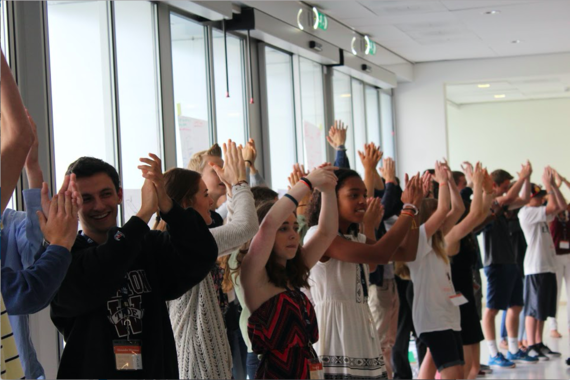 Point A: the universal starting point, a stepping stone on a path, the beginning.
My computer whirred but the wheels in my mind spun faster than my laptop's processor.

Congratulations, you have been selected to attend the 2016 EF Global Student Leaders Summit... I had just won a scholarship to attend an intensive student conference, which attracts teenagers from all over the globe who share a passion for human rights. This was it -- my point A.

International education company EF Education First hosts the Global Student Leaders Summit yearly in various countries around the world. Past Summits have looked at the future of energy, education, and global business -- but during a time marred by devastating acts of terror, including the abduction of hundreds of schoolgirls in Nigeria and wars that have forced thousands to flee their homelands, the 2016 Summit on Human Rights was particularly timely. Nearly 1500 students (and their teachers) from diverse backgrounds traveled to The Hague, Netherlands to participate in the discussion this year, following treks through various historical sites in Europe to prepare them for this exciting learning opportunity.

But why? Why would a group of media obsessed, sarcastic and disinterested teenagers, spend a portion of their summer vacation at an educational summit focused on human rights? Why care at all?

In reality, today's teens do pay attention to societal struggles. Young people have grown up to understand that one person can make an impact; and, for many student attendees, the Human Rights Summit served as the stepping stone to help them begin identifying the role they hope to play in addressing these pressing global challenges. To better understand the motivations that brought this group of students together, I asked several about their own ties to human rights.

Mara Cruz, a student from Round Rock, Texas, heard about the Summit and was immediately interested. Cruz's dad, a Nicaraguan immigrant, was drafted into the army at just fifteen years old and never had the opportunity to return to his education.

"I've grown up seeing how much this affects him," Cruz said. "He's not as confident in his abilities as he would have been with a degree. That right was taken from him."

Similarly, Visvajit Sriramrajan of Chicago, Illinois joined the conference as a response to the injustices his family has witnessed in India."It saddens me to see the inequality of people in society that comes from [the] ... caste system. My father emigrated to the United States ... to receive better educational opportunities to advance his knowledge and career. When I heard the Summit theme of 'human rights' it instantly clicked with me."

Around the time that applications for the trip were released, I had learned of global medical mistreatment. My brother, recently returned from a mission trip in Haiti, described to me nightmarish tales of people whose lives were cut short because medical care was not accessible in their region. I yearned to open my eyes further into this hidden world. The more research I did, the more appalled I became. But what could I, a shy 15 year old teen, do to change this?

The Summit became my beacon. If I could make it there, surrounded by hundreds of kids with this same hunger for change, I knew I might refine my ideas about how I could make a difference.

Teens' passion for human rights isn't increasing by chance. Due to the somewhat recent proliferation of new technologies that allow cross-border interconnections in ways that were previously not possible, teens from around the world have better opportunities to reflect on the basic rights that many take for granted. This spark of passion is growing rapidly, spreading across social media and generating more attention than ever before.

Sheryl WuDunn, the first Chinese-American Pulitzer prize winner and former New York Times journalist, spoke of her delight in this realization throughout the Summit. "There is much more of an interest in [the topic of human rights]," said WuDunn. "This is a very special moment in time."

WuDunn is spot on. Members of my generation are known for their innate curiosity and the desire to do meaningful work that leaves a lasting positive impact. So it's no surprise that this Summit's central theme spoke to so many young people from so many different U.S. states and international countries.

The curiosity extended to our pre-Summit travels. While touring historical sites such as Dachau and the Anne Frank House, I was amazed by my peers' abilities to tie every destination back to a current crisis: Anne Frank and Syrian refugees, re-education camps and warlord takeovers. These teenagers drew parallels that spanned 70 years. Simple textbook lessons came to life and seemed more pertinent to me than ever before.

This is the power of our generation. Our curiosity opens doors to potentially powerful new ideas. My generation is not only aware of our surroundings, but we are bold and determined. We plan on making a difference.

But our Summit experience wasn't only about exploring and discussing global human rights challenges, the EF event organizers also sought to impart the practical skills we'll need to prototype solutions to these challenges and put a plan in motion. They did this through a process called design thinking, which was new to many of the student Summit attendees. Design thinking is a group approach to solving complex problems that emphasizes empathy, creativity, and solving for the end-user. We were challenged to prototype a solution to a human rights challenge of our choosing using the design thinking method, and then present our solutions to each other at the capstone Innovation Village, where two winning teams were selected.

I left the Summit with a greater sense of empowerment to bring my ideas into reality. In the future, I will join an international medical association and deliver aid to the neglected. I will teach communities about the importance of medicine and educate them on how to care for themselves and their families.

Yes, I am a teenager. But that does not handicap me in any way. My passion will not be tamed, nor will any of my peers. We will tell our stories. We will shine the light. As Sertan Aldogan of the Netherlands, said so eloquently: "You are never too young to change the world."

We have every intention of doing just that.

Erin Hudgins is a rising senior from Round Rock, Texas.

This post is part of a series produced by The Huffington Post and EF Educational Tours about the recent EF Global Student Leaders Summit, which explored human rights in the Netherlands. The Summit Series combines educational travel with a two-day leadership conference, and asks students to tackle global challenges in places where those challenges are notably present or well-addressed. To view all posts in the series, visit here.