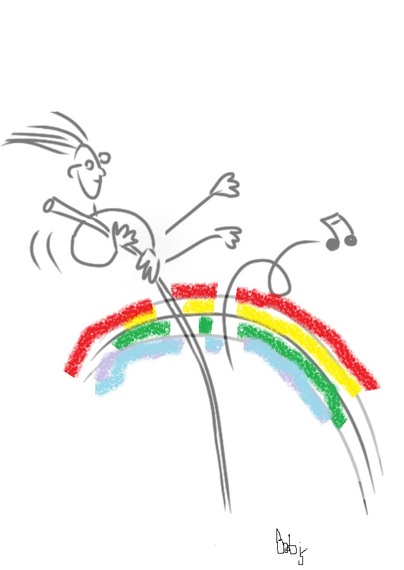 I've been working on a film for several years on the continuing influence of John Lennon on many, many people. I, too, am part of that group, having first loved the Beatles, then especially John when he moved to New York. Later on, I fell in love with a musician who actually thought he channeled Lennon. When I considered why I was so obsessed with the ex-Beatle as well as my ex, I began to understand that it was much more than the hair, face, style and great music... it was the message... and in Lennon's case, the message was clearly wrapped up in his most iconic song, "Imagine". I have always been a peacenik and after interviewing countless others for the film, it's become obvious that they too are driven to fandom by the utopian vision that "Imagine" offers.

There is another song that has a similar power: "Over the Rainbow" (lyric by E.Y. "Yip" Harburg, music by Harold Arlen, from the 1939 motion picture The Wizard of Oz. I've written about it before, but as the lyricist's son, Ernie Harburg, lives nearby it seems completely natural that this conversation and what this song represents has become a theme of this autumn.

Like "Imagine", "Over the Rainbow" speaks of a world 'where we can all fly to' (Imagine: above us only sky)... where the pot of gold isn't money, ("Imagine": no possessions) but a way of living that is in accordance with loving and natural principles ("Imagine": nothing to kill or die for). When Dorothy sings "someday I'll wish upon a star", one is stepping up to high ideals ("Imagine": a brotherhood of man), not giving in to fear ("Imagine": no hell below us).

In both these tunes, there is an emphasis on equality and diversity. Lennon writes about sharing all the world, while Dorothy sings the colors of the rainbow so pretty in the sky, are also on the faces of people passing by.

These two songs are not so different in their pitch and appeal. Is it possible that the dream they speak of really does reside in most Americans hearts, even if they appear to be suffering from temporary amnesia? For sure many of the folk in Trump's camp love "Over the Rainbow" and have watched The Wizard of Oz on television many times. Are they oblivious to its message as they continually applaud for their candidate's vision of the U.S. which is mean and unforgiving? Are they blind to the initials of our country -- U.S = US. A land where we all are supposed to share the big fat American pie, no matter where you came from or when?

It's not hard to see how that shortsightedness has occurred over the years. As the middle class have been pushed out of the playing field and the poor have gotten even poorer, we can't help but feel we've moved far from that vision of equality. But that doesn't mean that the vision is still not there in our inner eyesight... and a reality that we can all still work towards.

Both John Lennon and Yip Harburg both came from simple backgrounds where economic strife was close at hand. But to their credit, they never lost sight of the needs of others, even while their own fortunes rose. Perhaps to have that level of empathy, it helps to have suffered. Certainly it's true of Hillary. Just by virtue of being a woman, there is a level of empathy that's built in... for the struggles of women and children worldwide as well as the great strength that's required to succeed in what is still in many ways a man's world. The problem is that many men can act like bullies, and a good antidote for that is to have a woman lead us for once.

But Trump was and is privileged and despite hiring real workers for his buildings and living in a diverse city like New York, it appears that he has not built up a reservoir of understanding for anyone but himself. He fakes it with the throngs who seem to gain energy applauding and emulating his intimidating and racist tactics. But he's not one of those workers; not by circumstance or by heart.

Ernie Harburg has given me a W.W. Denslow drawing from the original edition of L. Frank Baum's Wizard of Oz. It refers to the Wizard as a humbug. Wikipedia describes humbug "as a person or object that behaves in a deceptive or dishonest way, often as a hoax." We mostly associate it with Charles Dickens' A Christmas Carol. Ebenezer Scrooge, a most unloving character, says "Bah! Humbug!" when he shows his disdain for Christmas. And in The Wizard of Oz, the Scarecrow calls the wizard a humbug, and the wizard, actually has the good sense to agree. In the cartoon, his admission also includes that he feels he's an okay man, and adds "but I'm a very bad wizard." 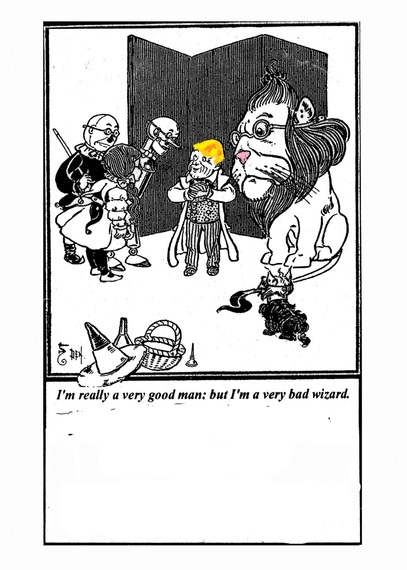 Trump, even with his pyrotechnics, may well be a good man. But he is, according to Harburg, also a huge humbug. It is a smoke and mirror trick and at least according to the lack of details in his world plan, has little substance once the curtain is drawn. His cartoon no-plan could easily contribute to making the world an even more dangerous place. Gregory Maguire, author of Wicked, says "The Wizard was just as much of a villain as the Wicked Witch -or even more so, since he sent the young and inexperienced into a field of battle to do the dirty work".

It's been said that Oz is an abbreviation for "ounce," the way of measuring gold and the green of the Emerald City represents the American dollar. Trump has paved his identity in the grand accumulation of wealth, though now we are finding that some of his estimations may be misleading. Either way, flaunting gold is not the most attractive way he can position himself as a leader. What of wisdom, courage, smarts and heart? All of the things the characters accompanying Dorothy had the humility to ask for.

In the end of The Wizard of Oz, you feel a bit sorry for the old humbug wizard. He has had to live with his false image for so long that he has most likely hidden himself from himself and doesn't know who he truly is. But during his reign of Oz, he has raised the bar of fear and caused much damage to those around him. Now that's bah humbug!

Lennon, the dreamer, ends his song "Imagine" with, And the world will live as one, while some forty years earlier, Yip Harburg, asks, Oh, somewhere over the rainbow way up high, And the dream that you dare to dream, why can't I? Why, indeed. Hillary is a feisty Dorothy and a very good woman to take us on our journey over the rainbow.