It was three AM. I was walking down a street in one of Seattle's toniest neighborhoods with my 25-year-old daughter and another young woman. We were part of Seattle/King County's One Night Count of the homeless, a massive effort to document the number of "unsheltered" persons on a random winter night, after the shelters had closed their doors. 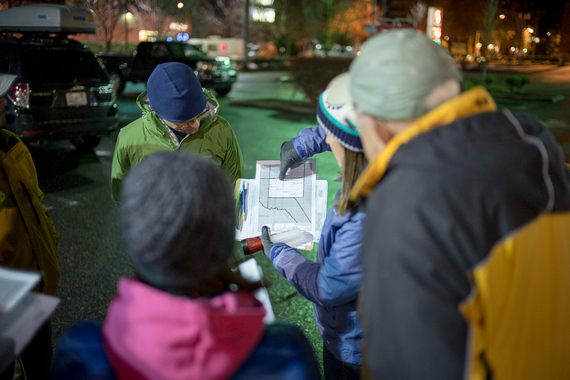 It was my first time, but fortunately my companions were veterans of working with homeless populations. We spent the next two hours covering specified streets and alleys, peering behind trash cans and into parked cars, doorways and little park-like spaces. The effort, a project of the Seattle/King County Coalition on Homelessness, was carried out by nearly 1100 volunteers who spent a few early morning hours documenting the men, women and children who had no indoor shelter.

It was a clear, cool January night. We strolled past glittering display windows for the many new condominiums and apartment buildings in the area -- brightly lit, elegant showrooms with upscale décor and expensive furniture, plush sofas and carpets. As we moved past a low wall lined with manicured shrubbery, I glanced at a long mound covered by black plastic, nestled under the greenery. The three of us stopped, and suddenly I heard the faint sounds of a popular song. I jumped, and looked over at my daughter, who nodded knowingly. Yes, there was someone under that makeshift shelter, and they were doing what many young people do to lull themselves to sleep after a stressful day -- playing music.

We walked a few steps farther, and she said in a low voice, "That counts as a structure, and there are usually two in that kind of space."

I reached for my clipboard and made two tally marks under "structure, gender unknown."

We were assigned to a neighborhood with modest numbers of homeless, and by the end of the night we had tallied just a dozen sleeping outside. The entire count, however, revealed 3,772 King County residents without shelter that night -- in cars, tents, doorways, parks and under bridges. Additional people were in shelters or in transitional housing. In all, there were nearly 10,000 souls who were without homes on a chilly January night in and around Seattle, a city of 650,000 people. 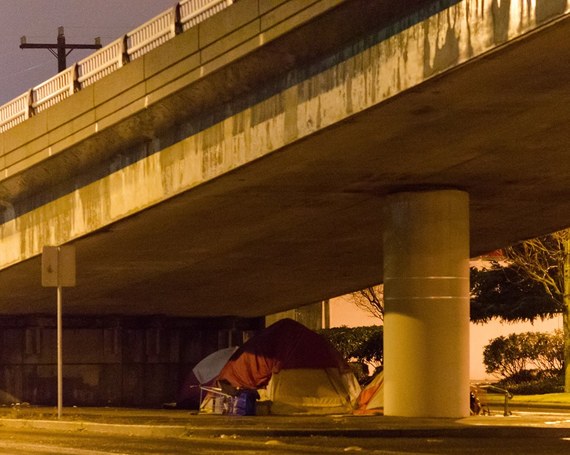 That tally exceeded last year's by 21 percent, and yet is an underestimate. Many homeless take great pains to be invisible to passersby, and it is impossible to cover every space where people might sleep in the county.

Most people can't remember a time when the homeless weren't an ever-present part of living in a city. But homelessness is, after all, about extreme poverty. It's also about ever-rising inequality, the dramatic reduction over the past few decades of American jobs that pay a living wage, paired with millions of home foreclosures that were part of the 2008 economic crisis. For homeless single men and women, substance addiction and mental illness are key causes as well. These factors all combined to create a country where an estimated 1.6 to 3.5 million people, as much as 1 percent of the total population, are homeless at some time during a given year. Many of these homeless are employed, but working part time at service and other low-wage jobs that don't pay enough to cover the expense of housing.

We get a deeper understanding of the pain of homelessness by looking at the individuals who endure it. An estimated 1.5 million American children are homeless at some time during the year. As many as half of the children who "age out" of foster care at age 18 end up living on the streets. Up to 40 percent of homeless adults are military veterans. Most are subject to open discrimination, and many to violence on the streets, with little recourse to protection from the police. Encampments of the homeless are regularly disbanded and forced to move on to other locations, where they are equally unwelcome.

We are a country that not only tolerates this ongoing tragedy, but has come to expect it.

After we finished counting in our assigned blocks that night, the three of us went back to the organizational center for a massive breakfast of eggs, bacon and fried potatoes. Relishing the savory meal, I caught myself saying to my daughter, "I'm glad it didn't rain -- we didn't bring an umbrella." I realized I had already detached, distanced myself from the people we had counted, returning to thoughts of my own comfort during our two hours on the streets. Is this how it happens? I wondered. A moment of empathy, quickly eclipsed by personal everyday concerns.

Seattle is fortunate that our mayor Ed Murray is committed to spending more resources to address the immediate problem of homelessness, but we can all be doing something to help. Volunteering with local organizations that support basic services for the least fortunate is a useful activity that can also remind us of the many social problems that poverty and homelessness produce.

But solace for the symptoms won't cure the problem. If we are to address the conditions that bring about homelessness, Americans need to understand the repercussions of our dramatically rising economic inequality. Learning more can provide both motivation and a means of action. A resource that documents a dizzying array of the causes and effects of US inequality, as well as current approaches to addressing them, is Inequality.org.

Public policy produced the current crisis, and public policy can change it. The growing power of corporate America has led to legislation that protects the wealth of the 1 percent while keeping wages stagnant. In 2010 the Supreme Court determined that that US corporations have the rights of people - even while real human beings don't have access to one of the most basic human rights, shelter. There's a lot wrong with that. Unless we find ways to address our worsening inequality, we'll keep counting those thousands of men, women and children living on our streets and in our alleys, well into the future.