Yuja Wang was still an undergraduate at Curtis when she got the call: piano soloist Murray Perahia was under the weather. Could she jump on a plane to southern California and perform the next day with the Academy of St. Martin in the Fields?

She could, and she did.

The pianist, barely 22, played with authority and sensitivity, wowing the musically literate in the Orange County audience (yes, there are some even in Costa Mesa).

She also astonished the ensemble's legendary conductor, Sir Neville Marriner. The audience was treated to the unique tableau of this towering figure on the music scene, 82 and approaching retirement, gazing with fascination at a young woman in the first throes of her career playing breathtaking, breakneck encores.

Wang captivated another top conductor, Michael Tilson Thomas, at another impromptu performance, this time at Carnegie Hall, filling in for yet another ailing soloist. Her playing moved Thomas, a mentor figure in Wang's career, literally to bow down to her on the famous stage.

Word got around and piano virtuosi most likely started taking better care of their health.

Seven short years later, Wang has become an international star in her own right, touring the world, named 2017 Musical America Artist of the Year, and signed to Deutsche Grammophon, classical music's most respected brand.

Last week, Wang took her talents to Lincoln Center's David Geffen Hall, where she performed a sold out recital with violinist Leonidas Kavakos. Wang could have taken the easy road and performed an evening of hummable crowd-pleasers, but that's not what you do when you're one of the most talented, enthralling, and even mesmerizing performers on the world scene.

Instead, Wang and Kavakos performed four extremely difficult pieces by Janacek, Schubert, Debussy, and Bartok. They are rarely performed because most touring musicians don't want to work that hard. The majority of the top dogs have a repertoire of concertos they can play in their sleep, and with some of their performances it sounds that way.

It used to bother Wang, when she was younger, that audiences initially compared her to Lang Lang, the Chinese prodigy known more for his showmanship than his technical skills. European audiences in particular held a prejudice against Asian performers, believing them capable of technical greatness but lacking the emotion that great music ushers forth.

They don't make those complaints any longer. Wang won over Europeans, Asians, North Americans, and probably also Martians and Venetians with her ability to play with both drama and dexterity.

Wang certainly blew the minds of her Lincoln Center audience. She played with urgency, brilliance, color, energy, and emotion. The Washington Post calls her "arguably" the hottest pianist in the world; they won't get an argument out of me.

The pairing of Wang and Kavakos seems odd to the eye and sometimes to the ear. He's world class, yet her talent comes from another planet. Wang dresses as elegantly as she plays; in New York, her jaw-droppingly elegant Atelier Rosemarie Umetsu gowns matched the music.

The good news is that you get to hear four pieces seldom played, and you get to experience Wang's fiery virtuosity. If you missed the show in New York, you can catch it in southern California and Western Europe over the next few months (YujaWang.com for details).

One of their dates is at Segerstrom Concert Hall in Orange County, where the then-unknown Wang astonished Sir Neville Marriner, back when his career was winding down and hers had just begun. Just seven years later, she has become the ultimate must-see musician for anyone who loves blindingly great performance. 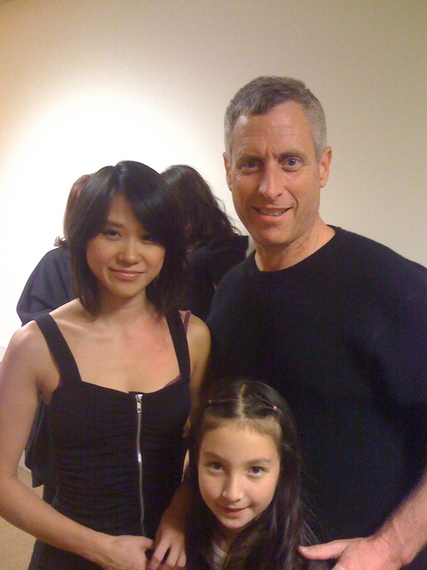 Yuja Wang with the author and Chynna Levin, 2012.