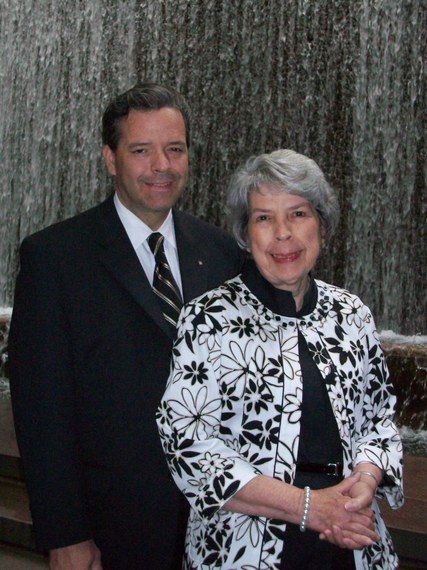 Who is Charles Todd?

If you aren't familiar with "his" many previous novels, you might be surprised to learn Charles Todd is the mother-and-son writing team of Charles and Caroline Todd.

Caroline has a BA in English Literature and History, as well as a Master's degree in International Relations. Charles has a BA in Communications Studies, and a culinary arts degree.

No Shred of Evidence, the 18th Inspector Ian Rutledge mystery, takes place on the north coast of Cornwall, where four young women are boating on the River Camel. They see a young man on another boat that appears to be sinking. While making a valiant effort to save him, he's struck on the head by an oar. An eyewitness, a local farmer, accuses the women of attempted murder. Ian Rutledge is called in to review the case. Since the victim is in a coma, there's no one to refute the eyewitness's account. Rutledge must deal with competing forces in trying to determine if the women tried to hurt the young man, and what may have motivated them. Other complications arise, and very little is what it seemed to be as the investigation reveals long buried issues and likely motivations.

Ian Rutledge suffers from "shell shock" due to an incident that occurred during World War I. Will you tell our readers about that?

Caroline: During the Great War, while on the battlefield, Rutledge had to execute a young man, Hamish MacLeod, for refusing to obey an order. This necessary but drastic measure permanently scarred Ian. Today, we'd say he suffered from PTSD; but at that time, it was referred to as "shell shock".

Wartime events leave their marks on so many people. Rutledge carried his wound with him from combat to Scotland Yard. Of course, his scars were psychological. Rutledge is an interesting character, and Hamish plays an important role in all the books because his execution haunts the Inspector. And, the reader knows what's going on in Ian's subconscious.

Charles: Hamish is not a ghost; he's an omnipresent memory in Rutledge's mind. Normally, the task of executing a soldier would have fallen to a sergeant, but in the early stages of World War I, sergeants were in short supply, having been the ones to go over the top first and to get mowed down routinely, in trench warfare.

The term "shell shock" describes the psychological disorder attributed to the effects of the explosive capacity of artillery shells on affected soldiers. We now call it PTSD, and better understand its origins encompass much more than battlefield sounds.

Nonetheless, no matter what you call it, often people suffering from it feel they must hide how they feel because it's frequently seen as a sign of weakness.

How has Ian Rutledge evolved over the course of this series of mystery novels?

Caroline: After the war, most doctors believed men suffering from "shell shock" were unlikely to commit suicide; but they were wrong, many did. Inspector Rutledge tries his best to cope, despite the very nature of his police work which draws him into a world of many horrors, including having to kill people and search for murderers. Over the course of the series, he's learned to deal with this dichotomy.

But for those women readers who are wondering about his love-life, romance will have to wait a while until he's dealt more thoroughly with these issues.

Charles: Over the course of time and in the previous novels, Hamish enables the reader to gain special insight into Rutledge's thinking as he solves various crimes.

Caroline: Rutledge has been very interesting to create. We've talked to psychiatrists and psychologists who have treated people with PTSD, and learned how the disorder is often complicated by survivor's guilt. The afflicted person feels, 'I've killed so many people or have sent so many people to their deaths, why do I deserve to live?' You hear these questions from people who have served in Iraq or Vietnam and in other bloody conflicts. And of course, this issue haunts Ian Rutledge.

As Americans, what made you decide to write about Ian Rutledge, an Englishman?

Charles: We both love and enjoy English history. My mother exposed me to books like Treasure Island, King Arthur, among others. Over time, Caroline's interests have broadened to include the Elizabethan period. I've branched out to other eras such as the American Civil War.

Caroline: So World War I was less common ground for both of us. And we felt it would be good to set the novels in England because the U.S. entered the war relatively late. Britain suffered far more than we did, socially, politically, and physically.

Charles: And it was such an important historical event. Even today, we're still dealing with some of the repercussions of World War I in the Middle East.

What's the process by which two people collaborate to write a novel?
(Laughter)

Caroline: When we started out, we were as green as could be. We tried doing the writing separately and then putting it together. It wasn't working. By the third chapter of the first book, we realized if we were going to collaborate, we both had to know everything each of us did, beginning with the research. We needed to work on the book together as it progressed. We didn't outline. We used the first scene as the jumping-off point for the story. We began working on the novel scene by scene. We would discuss each scene; write various versions of it; then select the agreed-upon very best version before moving on to the next scene.

We follow that process with each book, and of course, Rutledge and the other characters tell us who the killer is.

Charles: When we first sat down to write, our motivation wasn't to create a commercially successful novel. We wanted to have fun doing something together. Both of us enjoy mysteries, so writing in that genre was very appealing; and it's been great fun sending Rutledge to places all over England which we have visited.

When we write, we let the story evolve. We don't begin the process having all the answers. There's going to be very little excitement for the reader, if at the outset, we know every twist and turn the book will take.

As mother and son, are there any generational problems in writing the Ian Rutledge mysteries?

Caroline: I don't think so because Rutledge's era is before either of ours. We bring different perspectives to our collaboration, but it's really about what their world was like and how they felt about something. It's not about us.

If we were writing contemporary fiction, our generational differences might make it more difficult.

Charles: I agree. Because we are writing about a different time, there are no generational differences between us.

What's coming next from Charles Todd?

Caroline: We've just turned in the manuscript for the next book in the Bess Crawford series, and we've begun another Ian Rutledge novel. Writing two novels a year, along with short stories, keeps up quite occupied.

Congratulations on writing No Shred of Evidence, a beautifully written novel bringing a different era very much alive in a suspenseful and compelling way.