I touched down in Lima, Peru, today for the international climate change conference for a simple reason: There is a time for evaluating evidence, and there is a time for taking decisive action -- and the time to act is now, before it is too late to heed the warning. The world rarely gets advance warning of a global catastrophe. But for decades we have accumulated verifiable scientific evidence that climate change imperils all of us, no matter where we live or how we make our living. This is personal and the risks are real for all of us.

Climate change is a monumental test of global leadership. It transcends borders and economic status. Every nation has a responsibility to step up and respond to this threat because every nation is at risk. Thirteen of the 14 warmest years on record have occurred since 2000, and 2014 is on track to be the warmest of all. Extensive regions from southern Africa and New Zealand to Brazil and the western United States are experiencing record droughts. Farmers are slaughtering animals because they don't have enough food and water to keep them alive. Other regions are suffering historic floods and rising sea levels that threaten lives and livelihoods. 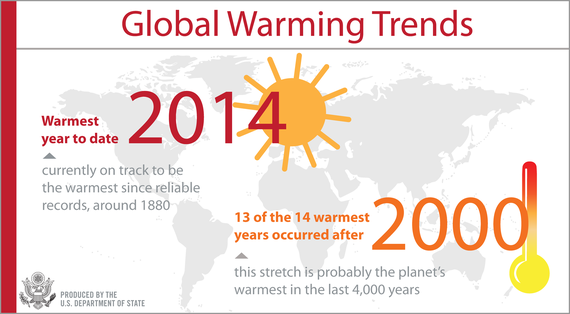 Peru offers a powerful reminder of the stakes. It is home to 70 percent of the world's tropical glaciers, nearly all of the world's major ecosystems and to more fish species than anywhere else on Earth. All of this diversity is at risk.

For the United States, the changing climate is more than an environmental issue -- powerful as the environmental argument is -- this is also a critical national security issue. It will spawn new vulnerabilities to extremism driven by famine and economic dislocation. Rising sea levels could flood some military bases and the increasing magnitude of natural disasters at home and abroad will strain our resources.

The threat of climate change is screaming at us. We must approach this global threat with the urgency that it warrants. We must work together, rich nations and developing nations as well, to avoid the instability and vulnerability that will surely befall us if we fail to heed the warning on climate change.

Over the next year, we must build on the discussions taking place in Lima to come up with an ambitious climate agreement that will provide the framework for the global cooperation that is essential to saving the Earth as we know it.

Industrialized nations have to play a leadership role. The historic agreement signed by President Barack Obama and President Xi Jinping in November was a leadership triumph and a clear recognition that big countries have a responsibility to cut their emissions of greenhouse gases. I want to be very clear: The United States knows that we and other major industrial economies contributed significantly to this dilemma, before we fully understood the consequences. We recognize we have a responsibility to take the necessary steps to meeting our commitments to cutting these poisonous emissions and we are committed to doing so.

But the history of some countries doesn't give license to other nations today to repeat the same mistakes. Developing countries have a responsibility, too, to reduce emissions and adopt policies that respond to the dangers that are now so very clear. Here's an important fact: Roughly half the annual global emissions are now coming from developing countries.

We have time, but not much. Fortunately, there have been positive signs coming out of the Lima conference. We now have enough pledges from the international community to exceed the initial Green Climate Fund target of $10 billion. The United States is proud to be contributing $3 billion. And we are all grateful of the pledges made in recent days by countries like Australia, Belgium, Colombia and Peru. This fund will be critical in helping the most overburdened nations of the world do more to respond to the impact of climate change. 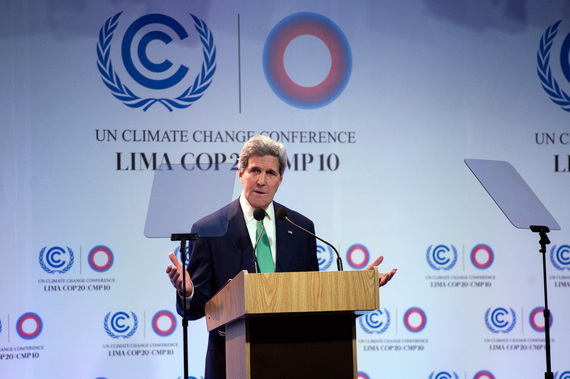 We must weigh the costs of our current practices against the price we are paying in terms of maintaining prosperity and stability over the next 10, 20 or 30 years. Coal and oil are cheap ways to power an economy in the near term, but I urge every nation to look further down the road. When you add up the bill, the costs are far higher than any of us will be able to pay.

This is a collective challenge. No one country can reverse the degradation of our climate. No single emissions source causes this massive harm to our planet. But science has given us the tools to deal with the broad array of causes and we must find a way to build the political will to start taking the steps today that will cut our emissions and save our planet tomorrow.