This is my confession. I am not of a faith that weekly goes to the confessional. I am of a religion that fesses up to our sins once a year and even though now is not the time, I must get the following off my chest and be absolved of my indiscretions. To my former self who I would describe as borderline OCD, I have become a failure. To my husband whose hand I wouldn't hold after he touched a public bannister, I regret those days. To my children who I forced gallons of antibacterial soap on their hands daily and to my friends who shared hand sanitizing wipes upon sitting at a restaurant AND after the menus were collected, I am so very sorry.

In Vietnam, perhaps with the perceived protection of a fresh series of booster shots for everything -the flu, tetanus, typhoid, Hepatitis A & B, amongst others, and armed with anti-malaria pills, Imodium and probiotics, I have sinned.

It was an out of body experience that we actually paid for...a shopping and cooking expedition with a highly rated Vietnamese chef. As we walked with him through the open market we touched live fish, eel, skinned frogs, soft-shelled turtles and more. Finally, our snakehead fish was picked and while it flopped about in a basket, it fell onto the ground where the merchant side-kicked (tapped heavily) it towards his cutting station. I turned away as he did his stuff on a wooden board that was probably last sanitized...never. Some tiger prawns and squid followed.

Back out into the street, he directed us to squat onto tiny plastic stools where live fetal duck eggs were dropped into a pot of boiling water and put into bowls (Balut). 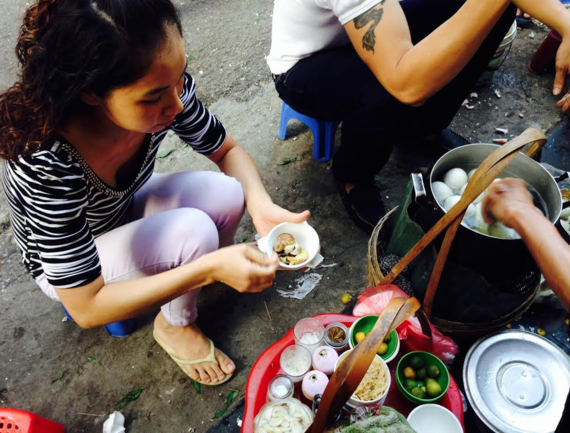 My husband and I whispered to each other about the location of the KitchenAid dishwasher, or any washing of the bowls and spoons we were handed. We were distracted by the density of noises, sounds and smells as the world went by and locals came hungrily to sit on the extra stools. I am hesitant to admit we ate it though I let my hubby, who had already survived snake wine, eat the icky stuff. But even worse, I watched my husband eat live sea maggots mixed with rice flour and fried like hash browns. OK, a little is coming up in my throat, again.

We stuck our hands into burlap sacks of rice, picked up herbs and various vegetables (finally, something not alive!) 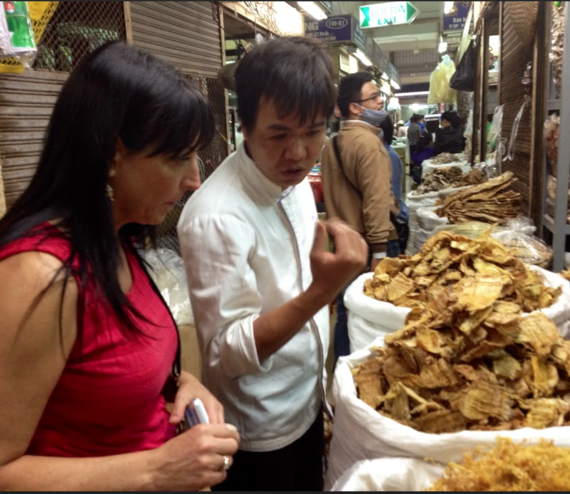 ...remember we had been touching live fish and maggots just 15 minutes ago and no mention of washing. Ducking down an alley, to the meat vendors, the chef grabbed and lifted samples to indicate the differences between today's fresh meat and yesterday's waning pieces. 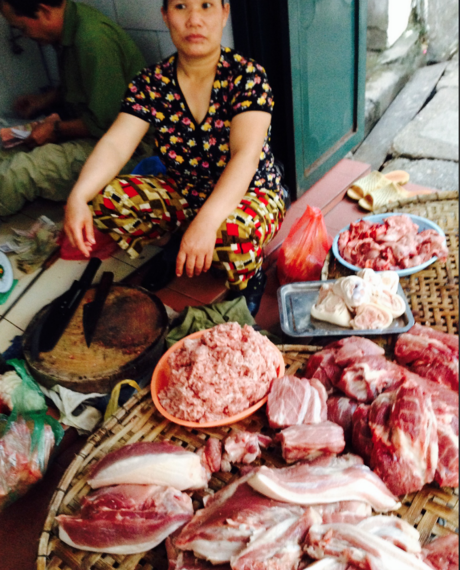 Reminder: no sinks, no soap, not even a tissue. He grabs a custard apple and breaks it apart to show us how to eat it. We do, as we are culinary putty in his filthy hands. This goes on until we are in his kitchen and he hands us plastic gloves for the food prep. Sure, now he shows us the gloves...he knows where we have been! His bathroom would give a Los Angeles restaurant inspector a coronary and let me just say, behind the unlock-able door, I doused myself with hand sanitizer until it peeled a layer of skin off. In the end, we were astounded by the great meal we cooked with him and that we were alive the next morning -though I don't think I have kissed my spouse since the maggot hash brown went in. 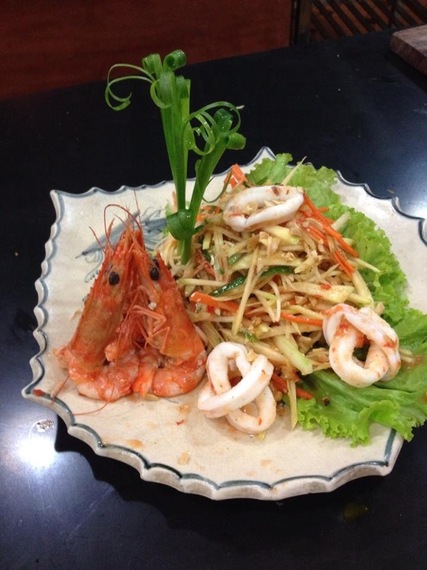 Taking life for granted, the next day with my expat cousin, Jarv, we folded ourselves down into a more disgusting meal. The waitress cleared (not cleaned) to the ground the previous diners' debris at an outdoor beer house - Bai Hoi (fresh beer) that packs them in and my cousin swore he has eaten at often. It took everything I had to sit in the smoking section--oh, it was all smoking, in fact, it looked required.

There was actually a used cup on the table that had chopsticks in it which we were expected to use. Really? I looked up at my cousin hoping a hermetically wrapped pair would travel to the table on the side of my plate. Not happening. I frantically rubbed the sticks together attempting to sand down a layer and then broke out a Wet Ones to scrub the freshly revealed wood. Oh, and the bottom little circle of wood...Aach! Why does wood have to be so absorbent? Left behind in my bowl was a duck foot and beak that had been delicately fried, seasoned and eyed by the smoking businessman at the adjoining table.

I swore from then on meals would be delivered to a cloth covered table. They were at exquisite restaurants of Vietnamese and EuroVietnamese food. Looking back, I still cannot believe what we did! In the 19 plus hours that it will take us to fly home, I will ponder names to give the worm or parasite that I probably picked up from this adventure. Oh, don't worry, I used the Lysol wipes in my backpack to wipe down my seat, tray, air vent and seatbelt on the airplane.