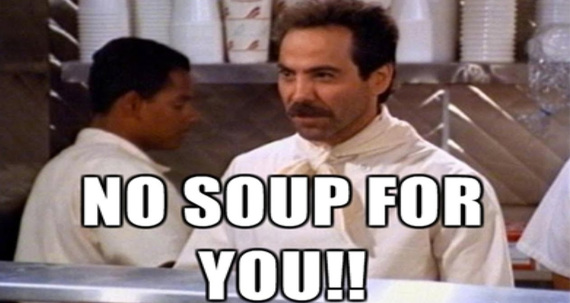 While claiming the mantle of continuity with Barack Obama, Hillary Clinton is in fact sending a message of impotence, inability to change and acceptance of the status quo.

Her tone is gray, stern, highly reminiscent of Seinfeld's "The Soup Nazi".

"No soup for you!", says Hillary to anyone who feels the system has been rigged against them.

That's clearly the repositioning chosen by her handlers after the New Hampshire debacle. She conveyed that message abundantly and eloquently during Thursday night's debate in Wisconsin.

Bernie Sanders, and the tens of thousands of young people inspired by him, should not demand that money be taken out of politics. Nothing can be done about it. It's just the way it is. "No soup for you!", says Hillary. (As a small consolation prize, the politician saddled with an unsurmountable trust problem asks for the voting public's trust in her assurances that politicians can both accept the millionaire grants and keep their independence.)

Free college may sound good. But even if other major economic powers offer it, the U.S. is different. So there. Hillary's message to young people is "No soup for you!" Bernie Sanders' proposal that a tax on Wall Street's greed could pay for it is simply unrealistic.

No soup either for workers who demand a $15 minimum wage. Never mind that working people cannot scrape a living on anything below that. That they have to resort to public assistance. Or that the scourge of below-poverty-threshold wages devastate African American and Latino communities. It cannot be done: "No soup for you!"

For Central Americans who've fled the ravages of the drug war, and against all odds inched their way to "El Norte", her message is, "we'll continue to send back your children so 'stay there.' No soup for you!"

Same for those who wish to stop -- or even challenge -- the state of perpetual wars around the world, particularly the Middle East. It's just the way it is -- regardless of major strategic blunders like the invasions of Iraq and Libya.

And to top it all, no one can question any of President Obama's policies. Those who do so belong in the camp of Republicans like Donald Trump.

The 2008 Obama campaign was swept into power by a mass movement of young people, minorities, progressives, all united under a slogan, "Yes We Can". It was as massive and inspirational as anything that's happened in this country in modern history.

That all belongs to the past, argues Hillary Clinton, the candidate who claims to represent continuity with Barack Obama.

The new reality for all those threatened and left behind by a system that grows more ruthless by the day is, "No soup for you!"