In what might be shocking news to younger readers, trolling predates the internet. When in 1987 the UK magazine The Spectator ran an article featuring a description of anti-apartheid activist Marion Sparg as "grossly fat and unattractive," I wrote a letter of complaint to the editor, which was duly published with my home address. A week later I received this in the mail: 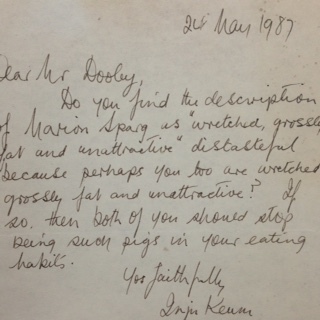 Abuse in the '80s took far more effort than it does today. Trolling in the modern age has become cheaper and faster, with no need to finding writing paper, envelope, and stamp. But online abuse is itself evolving fast. In 2011 I wrote about the trolling of Bahraini human rights activists -- attempts by those loyal to the repressive government to harass and intimidate dissidents into silence.

Bahrain continues to be shaken by unrest that flared in early 2011 when peaceful protests were violently suppressed by the ruling dictatorship. Part of the repression continues through laws criminalizing online criticism of the ruling family, and a sustained social media attack against those who defend human rights.

The 2011 piece featured internationally-prominent human rights defender Maryam Al Khawaja (@maryamalkhawaja). At the time she had about 29,000 Twitter followers, and said "People from the [Bahrain] Ministry of the Interior, they set up fake accounts. So a lot of tweets have been saying that I work for Iran, and I am going for a pro-Iran agenda in Bahrain. It's ridiculous."

Clearly, the relentless campaign of abuse has failed in to silence her or other Bahraini human rights voices. Four years later her following is well over 100,000, and she says "Generally the fake accounts are still there, the sectarianism is still there and of course if you block one you have five more popping up. What's new now is that you have high-profile people, those who work in the pro-government media or even represent the government internationally who are attacking activists openly on twitter." 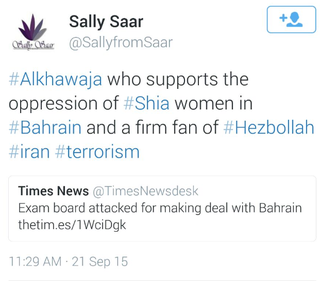 It does seem that the attackers are now less concerned about anonymity, but are still fixated on the same few themes. 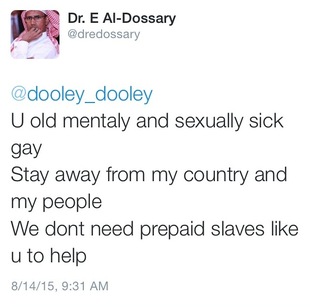 Danielle Citron is an expert on online harassment and privacy. She's the author of Hate Crimes in Cyberspace (Harvard University Press September 2014) and a law professor at the University of Maryland. "Women are often attacked in a sexually humiliating and sexually threatening way and men are often reduced in the abuse to sexual objects, their sexuality targeted too, by being described as gay in an attempt to humiliate them," she says. "Much of the abuse is predictable - a playbook where threats are hauntingly similar. There's a mob culture too sometimes where the attacks are like a feeding frenzy - it's all an effort to silence people."

It's not unusual for Maryam, myself and many others who use social media to promote human rights in Bahrain to get dozens of abusive tweets a day.

They range from the unimaginatively primitive 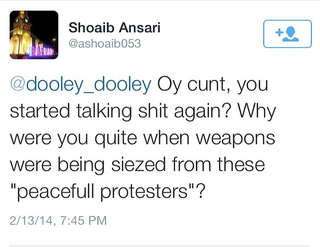 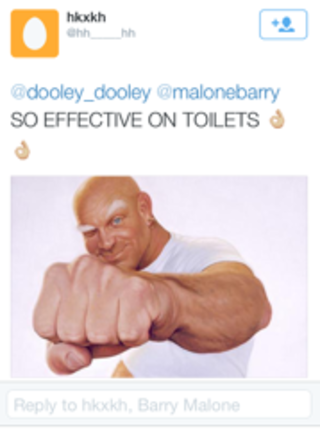 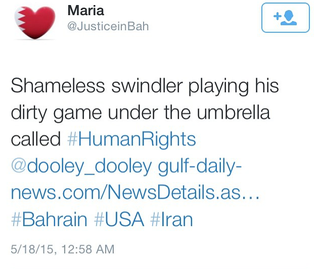 To the yawningly predictable 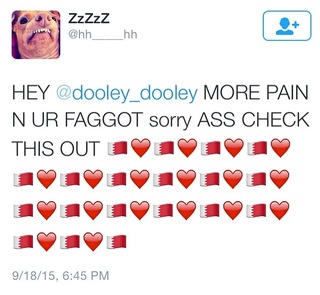 It is impossible to tell how things will have developed in another four years, but social media companies are beginning to take more responsibility for what's being posted on their sites.

"Twitter and other social media have come a long way in recognizing the problem, in seeing that harassment really limits people's ability to express themselves, that there's a real cost to people's rights," said Citron.

This is welcome news, but there appears to be no effective deterrent to those trying to silence human rights activists in Bahrain, and it's all too quick and easy for trolls to click an instant insult. I just keep thinking how it might be different if they had to write an actual letter.