Although often lauded as one of the most generous in the world, the U.S. asylum system remains conspicuously flawed. Many potential asylum seekers are unable to complete even the first step to seeking asylum: physically arriving in the U.S. Traveling to the U.S. is simply not a viable option for too many persecuted LGBT people around the world. Due to severe marginalization, many LGBT people cannot meet the requirements to obtain the visa that would allow them to travel to the U.S. Even if they could qualify for the necessary visa, they still often do not have access to the economic resources needed to reach the U.S.

There is no such thing as an asylum visa to the U.S.A. So anyone who wants to seek asylum in the U.S. has to contrive another way into the U.S.A. and only once here are they able to apply for asylum. Usually the way in is through a visitor or student visa. However most persecuted LGBTI people in Africa do not qualify for such visas, as they usually have to show stability in their home country to prove they are likely to return home. Creating an intention to stay ahead on a visa where you promise to return is fraught with problems. In any event obtaining such a visa is virtually impossible in most cases, as so many have lost that which serves to satisfy the requirement of stability such as family, decently paying jobs, ownership of land, and financial means. So in essence, that which serves to persecute them, is that which actually traps them. Unless they cross over a border which is usually into an equally dangerous country, to become a refugee under UNHCR resettlement programs, they will never make it out. When one is resettled by UNHCR, one does not have a choice of country.

Consequently, LGBT people remain trapped in countries that continue to oppress them without mercy. They live in constant fear for their lives. They face hopelessness and their own mortality on a daily basis. They live in a perpetual Catch-22: they have to leave but there is no way out.

These are real people - people who suffer every day purely due to having the "wrong" sexual orientation or gender identity. They are left struggling to make it from sunrise to sundown in countries that make their happiness all but unobtainable.

One such country is Uganda. Widely regarded as one of the most homophobic countries in the world, Uganda still prohibits same-sex relations under law, and people convicted of such acts face 10 years to life imprisonment.

According to Sexual Minorities Uganda (SMUG), an umbrella non-governmental organization based in Kamplan, Uganda that advocates for the protection and promotion of human rights of LGBT Ugandans, the situation is dire. SMUG reports that 96 percent of Ugandans believe homosexuality is not an acceptable way of life and 98 percent of gay asylum seekers fleeing persecution are returned home to a likely death or persecution.

Instead of seeking asylum in the U.S., many desperate LGBT Ugandans are crossing the border to Kenya in hopes of securing refugee status under the UN Refugee Agency (UNHCR). Some manage to get resettled. Others are rejected outright. However, the people that do receive refugee status still face a perilous existence. While there are organizations in Kenya devoted to helping LGBT refugees rebuild their lives, there are not nearly enough to satisfy demand. This lack of infrastructure results in many LGBT refugees resorting to sex work and blackmail to survive.

In African countries where being gay continues to be a crime, such as Uganda, more direct humanitarian assistance is severely needed. Currently, there simply isn't enough on the ground support. And to make matters worse, there continues to be a crippling lack of awareness for global LGBT rights.

It is crucial to realize that despite significant progress for LGBT rights in the U.S., there are LGBT people in other countries who are left desperate for a way to escape their present circumstances. Their ability to escape and resettle in a safer environment is often a matter of life or death. 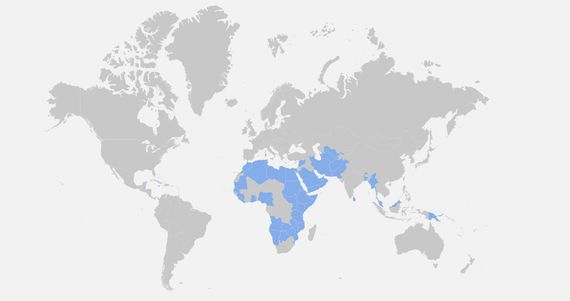 Image courtesy of Victoria Sgarro. A map of where it is still illegal to be gay.

The U.S. asylum system by no means meets all of the needs of the persecuted LGBT people who are able to physically reach the U.S., but what might be even more troubling, is the U.S.'s decision to set an access point that remains unattainable for so many people. The assumption that persecuted LGBT people will be able to escape from grossly homophobic, dangerous countries with little help and then have the economic resources necessary to physically travel to the U.S. is neither realistic nor humane.

In practice, the inaccessibility of the U.S. asylum system is pushing LGBT people to cross over local borders to obtain refugee status in neighboring countries rather than seek asylum in the U.S. The truth is that we have constructed a system that makes it much more likely for an LGBT Ugandan to flee to Kenya than to attempt to make the arduous journey to the U.S. This is not a solution but a re-landscaping of the problem, resulting in people tip-toeing from one dangerous country into another homophobic country. (It is also still illegal to be gay in Kenya.) If we, the United States, actually want to be a contender for one of the greatest, welcoming, and most powerful human rights defenders in the world, I believe we need to seriously consider the implications of this on the ground reality.

The first hurdle persecuted LGBT people have to overcome is not navigating the complexities of the U.S. asylum system - rather, it is reaching the U.S. in the first place.