Crew members at the National Oceanic and Atmospheric Administration's Marine Mammal Health and Stranding Response Program are like superheroes for whales.

Heavy gauge monofilament line -- part of a fisherman's longline fishing setup -- was tightly wrapped around the base of its tail at least eight times, and tangles of gear were trailing behind the animal.

The lines, Lyman told The Huffington Post, were already deeply embedded into the whale's tailstock (the part "between the dorsal fin and the fluke"), and some of the tissue was already necrotic. Aside from the injuries caused by the fishing gear, the young humpback appeared to be thin; it was also covered in parasites and had two large shark bites in its right fluke blade.

There is hope, though: "I have definitely seen animals recover from worse," he told local news station KHON2. 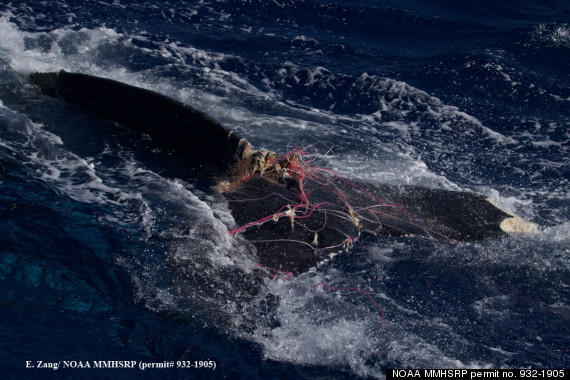 Entanglements wrapped around the whale's tailstock can be seen as its tail breaks the surface of the water.

According to an official operations report by NOAA, the response team used knives attached to poles, as well as a cutting grapple, to free the whale. First, the team removed the gear trailing behind the animal, which loosened and allowed them to cut the tight wraps around the whale's tail. The team's final cut pulled the line out from the wound.

The report states that about 98 percent of the gear was removed. The remaining gear, officials said, will hopefully shed on its own. 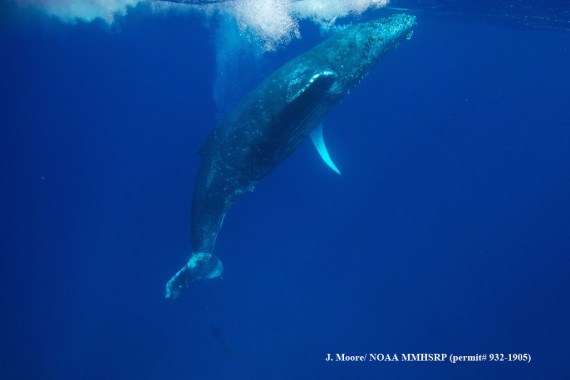 Underwater view of the entangled whale, with fishing gear trailing behind its tail. 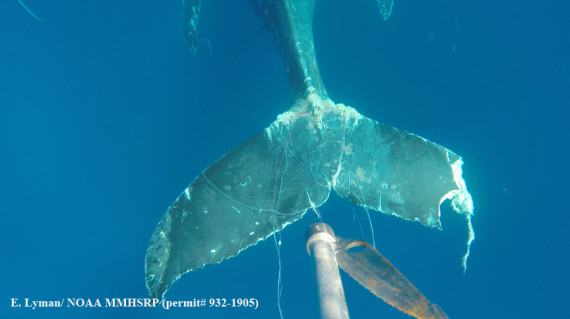 Camera attached to fixed knife on pole during an attempt to remove fishing gear shows the humpback whale with entanglements and shark bite injuries on fluke. 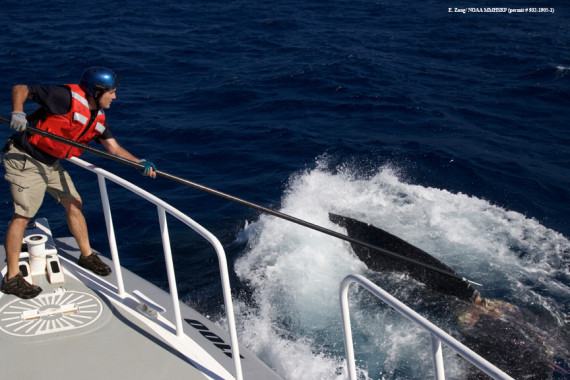 Ed Lyman attempting to cut lines with a fixed knife on pole. 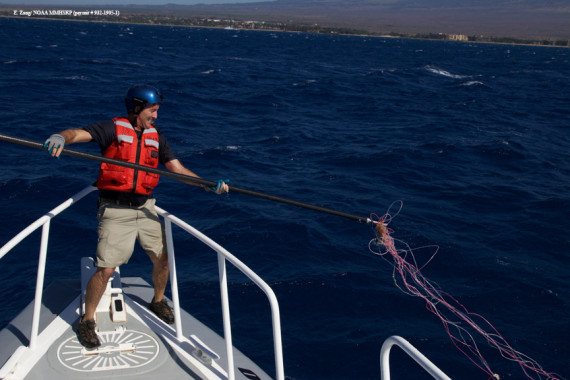 David Schofield, the rescue's official onshore incident commander, said this was the first rescue of the state's whale watching season. Between November and May, humpback whales travel to Hawaii's warm waters to mate and nurse their calves.

Unfortunately for the whales, these types of rescues are necessary and fairly common. Schofield said they work with local tour boats to identify distressed or entangled whales. Hawaii's official response team performs about 12 disentanglement rescues every season.

"We rely on our tour boat operation community because they're the folks that are out on the water every day," Schofield told HuffPost. "They have a lot of experience looking at whales and whale behavior."

While it's important to save humpback whales from fishing lines -- one of the biggest threats to the endangered animals -- Schofield urges people to leave these types of rescues to trained professionals.

"People will sometimes see a whale attached to some buoys attached to line and think they're doing the whale a favor by cutting the buoys off," Schofield said, "but that actually makes it a death sentence for the whale. By doing that, they've only removed the tip of the iceberg, making it impossible for a trained or authorized team to effectively disentangle the whale."

As for the whale rescued in Maui, Lyman said the animal is now better off without the heavy lines dragging behind it. "We definitely improved the animal's chances of surviving significantly," he said. "But by no means is it a given."

If you ever come across an entangled or distressed whale, Schofield recommends keeping 100 yards away and notifying NOAA's Marine Mammal Hotline (888-256-9840) or the U.S. Coast Guard. 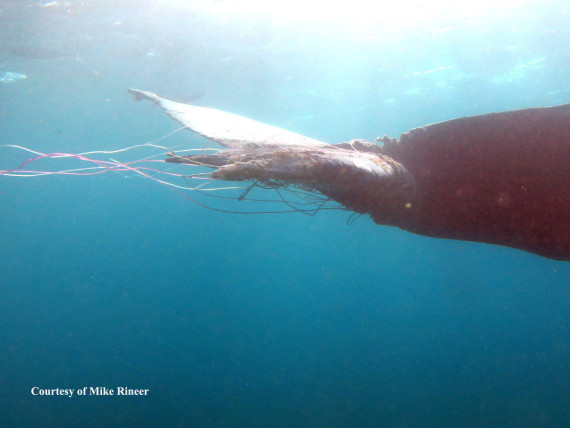 This photo was taken during a re-sighting of the injured whale on Dec. 14. Remaining wraps have come loose, resulting in additional trailing line. Photo: NOAA HIHWNMS MMHSRP permit # 932-1905.