Portraiture is most interesting to me because of the subject. Since I usually paint from imagination, painting a portrait offers me something that I do not otherwise have. The subject is of greatest importance. It is my interest in the person and the person's generosity that determines how successful the painting is. I choose subjects that satisfy my artistic curiosity. I have painted poets whose enchanting poetry I admire and which I seek to understand better.

I have painted musicians as well. My fascination with music was ignited by listening to great music while I paint: Miles Davis, Karlheinz Stockhausen, Harry Partch, Charles Ives, Ben Johnston and John Zorn to name a few of the most notable. Music is my favorite creative medium after painting and it is open to collaboration. Actually, collaboration is an important part of music and it leads to artistic discoveries that one rarely finds on one's own.

Noah Creshevsky and I had many online discussions about our artistic work long before we met in person. Noah was extremely supportive. I would often complain about limitations I find in my own work and he would say, "Isn't that our job as artists to find our way around our limitations?" We agreed that collaboration is one of those ways.

I admire Noah's music and was enamored by it long before I asked to paint his portrait. I love listening to his compositions, "Strategic Defense Initiative," and, "Psalmus XXIII." I have used them to propel me into creative states when drawing. The thought of painting his portrait came from seeing various photos of Noah that looked like mug shots; In a way he looked like an intense thug. Luck had it that we were both invited to a private performance of music by our mutual friend, John Zorn, and so we met for the first time in person. I immediately asked if I could paint his portrait and he said yes. 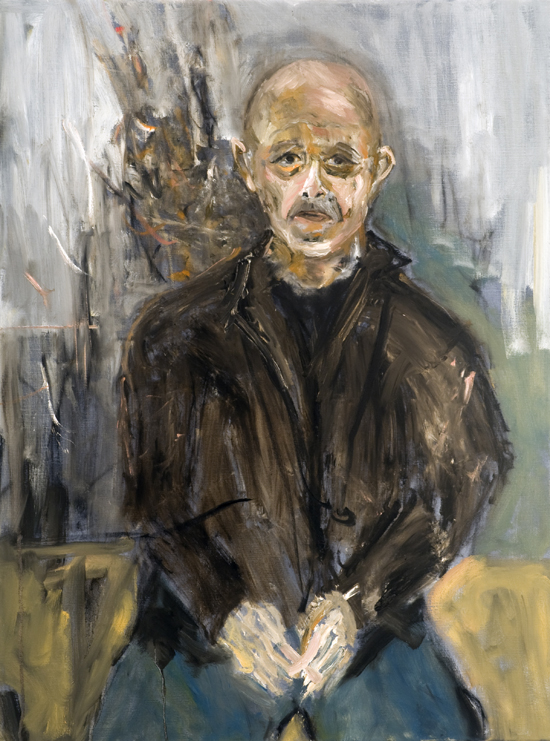 Noah's portrait is, in a way, a portrait of both of us. It is the expression of the experience of meeting him and feeling totally connected to him. We feel alike in so many ways. It was natural that Noah would be doing my portrait as well. And just as my portrait of Noah contains both of us, so does his portrait of me.

In preparation for his portrait of me, Noah asked me to play notes and phrases on my guitar, some fretless and some fretted. During the recording session, just as when I painted Noah, I felt I was getting to know him and discovering much about myself as well. It is an uncanny and moving experience for me to listen to Noah's portrait of me. It takes me back to when I was 12 years old sitting in my parents' dark basement playing piano, in a way that the piano teacher would never let me, and getting lost in inspiration.

Noah Creshevsky's music is totally original in its method and sentiment. He invented a method that perceives and expresses hyperrealism (a term Noah uses), which I feel I have been seeking in painting. Hyperrealism also expresses the intensity with which artists share a reality they then express in their work so viewers/listeners can recognize and appreciate it.

I am grateful to Noah for this composition:

Noah Creshevsky's most recent composition, The Four Seasons, has been recorded by Tzadik. Creshevsky lives and works in New York City.

"Poets are the unacknowledged legislators of the world." -- Percy Bysshe Shelly, "A Defence of Poetry"