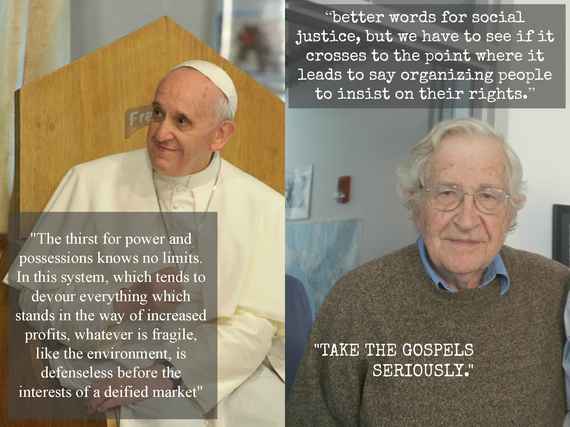 Pope Francis is shocking. Finally, one of the figureheads of the Western World is confessing the sins of the unjust economic model that is driving us all over a cliff. It is perhaps ironic that this humble and resolute man, who has taken over the Holy See in the midst of its disgrace, is the one to step forward and call for the atonement of our collective wrongdoing. Here is just a taste of what Pope Francis has to say in his recent "Evangelii Gaudium" (Joy of the Gospel):

"The thirst for power and possessions knows no limits. In this system, which tends to
devour everything which stands in the way of increased profits, whatever is fragile, like the environment, is defenseless before the interests of a deified market, which become the only rule.

One cause of this situation is found in our relationship with money, since we calmly accept its dominion over ourselves and our societies. The current financial crisis can make us overlook the fact that it originated in a profound human crisis: the denial of the primacy of the human person! We have created new idols. The worship of the ancient golden calf (cf. Ex 32:1-35) has returned in a new and ruthless guise in the idolatry of money and the dictatorship of an impersonal economy lacking a truly human purpose. The worldwide crisis affecting finance and the economy lays bare their imbalances and, above all, their lack of real concern for human beings; man is reduced to one of his needs alone: consumption."

The simple truth of these indictments gives them a righteous power. The same power that Jesus himself wielded in the stories of the gospels. Indeed, the stories tell that Jesus preached a radical pacifism that raised up and exalted the most unfortunate.

The indignation at the financial system that the Pope's words intimate and that most of us feel echoes the indignation that led Christ to overturn the table of the money changers and cast them from the temple. So, it is that Francis' words are at the same time an expression of faith as much as a testament to the injustice of our own times.

It shouldn't come as a too much of a surprise that this Pope has taken the Catholic Church in this direction. Pope Francis (born Jorge Mario Bergoglio in 1936 in Argentina) spent his formative adolescent years in 1950s and 60s Latin America where liberation theology took hold, breathing life into the Catholic Church and influencing Vatican II, the council convened by Pope John XXIII to modernize Catholicism in the early 1960s. While John, the "Blessed Pope," didn't live to see the end of Vatican II, he was able to ensure that the gospels and their focus on social justice were restored as primary teachings of the faith. This validation of liberation theology encouraged the work of the Church in Latin America and the subsequent rise of radical politics pushing for social justice for the peasantry there.

The United States ended up working with dictatorial client states in Central and South America to crush liberation theology. Horrific violence persisted throughout the 1980s, and it did succeed in preventing most of the reforms the movement sought. Nevertheless, the ideals of social justice were never lost entirely, and the US has been losing influence in the region ever since. Will Pope Francis now be able to turn the tables again?

I sat down to discuss a wide range of topics with the idol of my high school days, Noam Chomsky, in early October. This was before the release of Evangelii Gaudium, but after a lot of encouraging words about economic justice from Pope Francis. Chomsky's eyes lit up when I asked him about his thoughts on the new Pope's new direction for the Catholic Church.

Essentially, he admired the rhetoric of the Pope but was concerned that "nothing much is happening."

"we have to see if it crosses to the point where it leads to say organizing people to insist on their rights and to pursue the path of preferential option for the poor, take the gospels seriously"

Thus, while I enjoy reading the Pope reiterating his opposition to the current economic model, I, like Chomsky, was looking for more. Happily that is what I found in Evangelii Gaudium. In fact, Francis devotes more of his writing to how the Church should change its methods of evangelizing than he does on which topics to evangelize upon.

"Pastoral ministry in a missionary key seeks to abandon the complacent attitude that says: "We have always done it this way". I invite everyone to be bold and creative in this task of rethinking the goals, structures, style and methods of evangelization in their respective communities...The important thing is to not walk alone."

He stresses the need to get outside the confines of the churches and into the community, meeting people where they are and organizing around issues that the people care about, like economic equality. The way I read it, Pope Francis is giving license to the clergy and the lay membership of the Church to engage fully in liberation theology, and I suspect they will. Wouldn't you?

And that is the question really, because Catholic or not (I'm a Quaker myself) this radical honesty can light a spark in anyone's eyes. We can each take that license ourselves to evangelize about economic justice in our communities, and the light we shine will spark others to join us. "The important thing is to not walk alone."