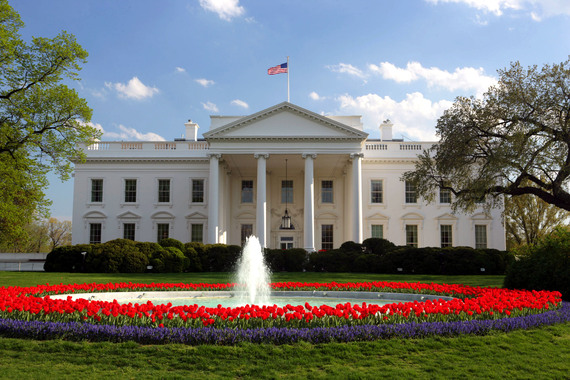 It is unusual for us to comment on an American election, even more so in the eleventh hour. But what is at stake at the moment in the U.S. election affects us all.

The Presidential election in the world's most powerful democracy has descended into name calling, disinformation and hatred at a level the world has not witnessed before from the U.S. With notable exceptions, many of the American media outlets have reduced the election to waves of scandal, real and imagined. They in turn have been played and fed stories intended solely to arouse suspicion and fear, even bandying about criminal charges that have no proven foundation in fact.

Yet there are issues at stake in this election -- most notably the proliferation of nuclear weapons, the honoring of key international treaties, and our shared responsibility to care for the planet itself -- that will shape the world, not only for those of us alive today, but for the coming generations.

More than four decades ago, The Nuclear Non-Proliferation Treaty -- the NPT -- effectively stopped the spread of nuclear weapons at a time when the world was being threatened with extinction by atomic weapons. Under the NPT, more than 180 non-nuclear states pledged not to develop nuclear weapons. Since that time, the three nations that did not sign the NPT --India, Pakistan and Israel -- developed nuclear weapons. With the exception of North Korea, all of the non-nuclear weapons states that signed the treaty have kept their pledge.

Without the constraining elements of this treaty we would certainly have dozens of new states armed with nuclear devices today. The chances of nuclear warfare on Earth would have increased exponentially.

In 1984, Ronald Reagan, who understood that "a nuclear war cannot be won and must never be fought," worked tirelessly with Mikhail Gorbachev to reduce the threat of nuclear conflict. In 1987 in Reykjavík, he and Gorbachev committed to substantial progress to reduce nuclear weapons. Since that date, the world has gone from more than 60,000 nuclear weapons to less than 16,000.

Presidential candidate Donald Trump has proposed steps, if elected, that would unravel the Nuclear Non-Proliferation Treaty and encourage states in potential conflict zones who are signatories to the treaty, including South Korea and Japan, to develop nuclear weapons. He has asked, if we have nuclear weapons, why we would not use them, either ignoring or ignorant of the very serious threat to mankind's existence that stimulating a new global nuclear-arms race, much less use of nuclear weapons by the U.S., would bring.

In July of this year, Donald Trump stunned the U.S.'s allies by announcing that he would make the U.S. defense of its NATO allies against attack conditional on money, again threatening to unravel a primary stabilizing force on the European continent.

In August of this year, he announced on his platform that, if elected President, he would "cancel the Paris Accord" on climate change and stop all payments of U.S. tax dollars to U.N. global-warming programs. Three hundred seventy-five members of the National Academy of Sciences, including 30 Nobel Prize winners, responded, saying in an open letter that such an action would have severe and long lasting consequences, not only on the climate of this planet we share, but on the credibility of the United States in honoring its word.

History has given us numerous examples of entire populations being swayed toward extremism by disinformation campaigns and fear mongering. In this case, the ramifications of the disinformation go well beyond a country or region, and threaten to put someone in office who would unravel some of the very forces that have created stability in our already fragile shared world.

Conversely, Hillary Clinton has served her country as First Lady to the country's democratically elected President. She was subsequently elected a U.S. Senator, and served faithfully as Secretary of State for four years. We have known her in action, where she has been a strong advocate for the rights of women and children and a bright and tireless believer in freedom and democracy building. While she will be the first to say she is not flawless, for 14 years she served her country well during some of its most difficult times and under extreme international challenges. She will further the United States' role as a global leader, politically, economically, and morally.

We urge Americans to make their election choices with care, based not on today or yesterday's scandal or the fear and anger engendered by the latest headlines, but on honest inspection of the candidates' impact on our planet's precarious future.

This article is cross-posted on TheCommunity,com