In two weeks, the eyes of the world's research community will be fixed firmly on Stockholm for the announcement of the Nobel Prizes. In celebration, Thomson Reuters released its annual list of Citation Laureates, esteemed scientists whose contributions to medicine, physics, chemistry and economics make them likely contenders for a Nobel Prize.

Over a decade ago, Thomson Reuters began publishing its annual list of scientists considered candidates worthy of a Nobel Prize. The primary factor pointing to their nomination was their record of citations in scientific literature. At high frequency, citations are a strong indicator of peer esteem and research influence -- citations represent a formal repayment of intellectual debts by members of the scientific community.

Research demonstrating the correlation between citations and winning the Nobel Prize has a history dating back to 1965 when Eugene Garfield, the inventor of a citation index for science (now known as the Web of Science), showed that Nobel Prize winners were very highly cited.

Higgs boson: A Nobel this year? 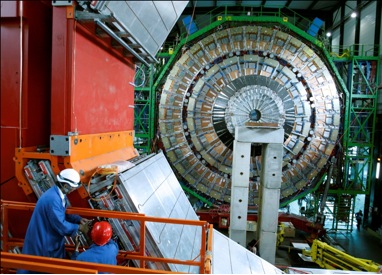 Caption: The Compact Muon Solenoid (CMS) detector at the Large Hadron Collider (LHC) at CERN. CMS and another LHC detector, ATLAS, were the ones primarily used in the Higgs boson hunt.

The July 4, 2012 announcement that two research groups at the European Organization for Nuclear Research, more commonly known as CERN, claimed identification of a subatomic particle that resembles in its characteristics the predicted Higgs boson was certainly a scientific landmark. However, the Higgs boson researchers probably have a while to wait before booking their trips to Stockholm.

The Nobel Prize committees have been historically conservative in recognizing breakthrough discoveries. The average time between a discovery and the awarding of the Nobel Prize in physics has been increasing over the last century and is now about 25 years. A Nobel Prize for the discovery of the Higgs boson -- if that is what it is -- will likely come much sooner, but analysis of the data by researchers outside of the CERN teams will be required, and that will take more time.

Additionally, if this discovery were to be honored, who, exactly, would be recognized?

The will of Alfred Nobel limits the Prize to no more than three persons. Peter W. Higgs would be required, based on his 1964 paper and because the particle is named after him (a form of peer recognition). But he was not the first to predict a Higgs-like particle. Also in 1964, and before the appearance of the Higgs paper, two Belgian researchers, Francois Englert and Robert Brout, published their notion of a Higgs-like particle. After Higgs' paper appeared, two American researchers (C. Richard Hagen and Gerald S. Guralnik) and one British researcher (Thomas W.B. Kibble) followed with similar proposals. All their papers were highly cited.

That would make six researchers who could claim a share for the prediction of the Higgs boson. Because the Nobel Prize is not awarded posthumously, and Brout passed away in 2011, the number is now five. A complete review of the contributions of these individuals would be necessary in order for the Nobel committee to make its difficult choice.

For these reasons, Thomson Reuters did not predict the Higgs boson discovery as a contender for a Nobel Prize this year. If the discovery is confirmed in peer review, and given more time for a thorough assessment by the Nobel committee, a Nobel Prize will likely result.

This year, across the four scientific fields of Nobel Prizes that the company surveys, 21 influential researchers were named, as their high-impact work make them eligible for a Nobel Prize. They are:

Charles H. Bennett of IBM Corporation, Gilles Brassard of University of Montreal and William K. Wootters of Williams College
For their pioneering description of a protocol for quantum teleportation, which has since been experimentally verified

Leigh T. Canham of pSiMedica Ltd.
For discovery of photoluminescence in porous silicon

Stephen E. Harris of Stanford University and Lene V. Hau of Harvard University
For the experimental demonstration of electromagnetically induced transparency (Harris) and of 'slow light' (Harris and Hau)

Anthony "Tony" R. Hunter of the Salk Institute and Anthony "Tony" J. Pawson of the Samuel Lunenfeld Research Institute of Mount Sinai Hospital
For the discovery of tyrosine phosphorylation and contributions to understanding protein kinases and their role in signal transduction (Hunter), and for identification of the phosphotyrosine binding SH2 domain and demonstrating its function in protein-protein interactions (Pawson)

Richard O. Hynes of Massachusetts Institute of Technology, Erkki Ruoslahti of the Sanford-Burnham Medical Research Institute and Masatoshi Takeichi of the RIKEN Center for Developmental Biology
For pioneering discoveries of cell adhesion molecules, Hynes and Ruoslahti for integrins and Takeichi for cadherins

Sir Anthony B. Atkinson of Nuffield College, Oxford University, and Angus S. Deaton of Princeton University
For studies of income inequality and contributions to welfare state and public sector economics (Atkinson), and for empirical research on consumption, income and savings, poverty and health, and well-being (Deaton)

Stephen A. Ross of Massachusetts Institute of Technology
For his arbitrage pricing theory and other fundamental contributions to finance

Robert J. Shiller of Yale University
For pioneering contributions to financial market volatility and the dynamics of asset prices

Like many other followers of the annual Nobel announcements, Thomson Reuters and our team of editorial analysts eagerly await the official awards. Whatever the outcome, one thing holds true: scientific literature citations are a valuable tool for gaining insight into the significance of research work and the potential long-term impact on society at large.