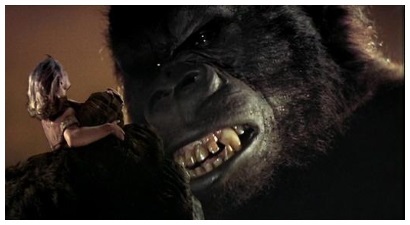 2016 marks the 40th anniversary of the film that changed the entertainment industry as we know it, the film that rewrote the rules on action entertainment, that dazzled audiences with its innovative special effects, that forever lodged in popular culture the notion that exciting adventures awaited audiences a long time ago, in a galaxy far, far away.

Oh, wait a minute... Star Wars debuted in 1977. In 1976, we got the Dino De Laurentiis remake of King Kong, the film that did absolutely nothing for the industry, special effects, or the public's gas shortage-ravaged attitudes. Come join Kevin Lauderdale, Orenthal Hawkins, Andrea Lipinski, and Dan Persons as they delve deep into this gorilla-shaped turkey, and try to get the world's biggest monkey off their backs.