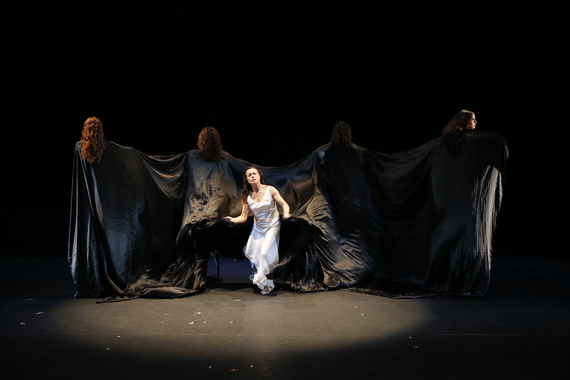 In a recent interview, Martín Santangelo, artistic director of Noche Flamenca, gave some background on his latest creation, a full length realization of Sophocles' Antigone. It is a visually stunning work that makes the best possible use of all the varied talents that make up the Noche Flamenca company.

Andrew Blackmore-Dobbyn: What was the beginning of your creation of Antigona?

Martín Santangelo: There was a lot of publicity around Judge Baltasar Garzón in Spain. He had done a previous investigation into the Desaparecidos (the Disappeared Ones) in Argentina in which he had gotten mass graves of people who had disappeared dug up and seen to them getting identified and re-buried. In Spain (2008), things were moving a little to the left and he was asked to do the same thing in Spain. Then there was this incredible publicity machine, I think it was one of the most incredible publicity campaigns I've ever seen in my life, that convinced 98% of all Spaniards that Garzón was stirring up things that were best left alone. Garzón had come up with the idea of collective memory and that if we don't remember what happened, it will happen again. What I saw was an incredible injustice and incredible stupidity. In the middle of this, I was going through my books to find something to read and I found a copy of Brecht's Antigone and I read it. I thought, oh my God, it's the same thing. Somebody wants to bury somebody and it's not about politics, it's about wanting to honor the dead. The resolution of Antigone is that we have to do this. We have to bury our loved ones to honor our family.

ABD: Antigone is probably most notable as having one of the first strong female protagonists. I can't imagine anyone better than Soledad Barrio to play her.

MS: Soledad is great because she's a powerful woman. There's something emotionally complex and yet very simple about her in that, like many Spaniards, her religion is family. That's a parallel with Antigone whose heroic act is that she loves family above all. Sole understands that deeply. It's ingrained in her.

ABD: How do you go from reading the book to the idea of wanting to make it into a flamenco work?

MS: That is the tough part because with dance it's hard to narrate something. I called Lee Breuer, the director, and asked if I could work with him a bit because I don't know how to do this. So we did the dramaturgical part and he helped me a lot with it. He kept repeating that the most important thing, good, bad or ugly, is that we tell the story. What you saw at the Joyce was not the story. My big fear was that Soledad and flamenco, they're very emotional and while the emotion matters, it's not going to carry the story over. There's no way to do the narrative with just emotion. It doesn't matter how much they feel or how much emotion comes out of it, there's no way to tell the story. My preliminary work with Lee Breuer was to find a way to take the flamenco and make it a narrative. The great thing is that we've had six performances and each one has had a talk back and I've asked if they audience is getting the story and the answer is always yes, one hundred percent.

ABD: For me looking at it, I asked myself what were the first choices you had to make. First you broke down the cast into singing parts and dancing parts. You have Gago, a singer, as Creon, and el Bocadillo, another singer, as Tiresias.

MS: Gago is short and tough, at first I was going to cast a dancer as Creon but then I looked at Gago and thought, he's perfect for it. He's like one of those dictators. He has a nine minute scene of the coronation of Creon as a bullfighter which is the most ridiculous thing in the world. He doesn't have the body of a bullfighter, he doesn't sing during it, he speaks in four different languages and acts as a demagogue. We worked on it for four months and he's extraordinary in it. It's very funny and at the same time frightening to see him as a bullfighter, being so demeaning, especially to women. It's a gigantic scene. When I was working with Lee, he said, try anything. He said, do your homework and when you're in rehearsal, try anything, as ridiculous as it may seem, try it. When I see it now, it reminds me of my fantasies, based on my research, of what the Greeks were doing. They were using singers and dancers as actors.

ABD: Yes. I don't think they had separated into discrete art forms and it was still very much a part of the religious realm.

MS: They had singers moving and every now and then it evolved into speaking. What was difficult for me was in breaking up the story into the elements of what flamenco is. And then I can always rely on Soledad's emotional qualities. I can explain to her that what the scene and the music is and then I tell her to do it any way she wants to and it works.

ABD: You can trust her dramatic sensibility?

MS: She's incredible. She's such a good actress. The only thing I have to do with her in this production is to sometimes pull her back a bit.

ABD: The chorus of women I thought was one of the particularly strong elements of the piece. How did that come about?

MS: First of all, I think that women in flamenco are easier to work with than men. Men have big egos and I think that having a Quixote-ish type ego is a part of flamenco, in men more than women. A chorus has to submerge, coordinate, synchronize and be ordered around, in the best sense. I did work with two or three men in the beginning and I had to stop working with them because it wasn't working for me.

ABD: Another new element that I guess might never have been thought of before was that you brought in David Thomas, a hip hop dancer. Why?

MS: I was rehearsing with two flamenco dancers and it was very exciting and fun to watch but there wasn't enough juxtaposition between the two of them. It was a very cool fight scene but I realized that it was more "wow" than telling the story. So, one Sunday I was taking my daughter to Dave's dance class and I was watching it thinking wouldn't it be incredible to have him? So I asked him to come to rehearsal. He began to do it and I knew I wanted this.

ABD: Obviously he has a different dance vocabulary, how were you able to work that into your creation?

MS: What was incredible about him is that I showed him the flamenco rhythms and he'd say, "I got it" and he did. From early childhood he imitated James Brown and Michael Jackson and you can't get much better rhythmically, especially James Brown. He has a fantastic sense of rhythm that he's able to translate to the flamenco. We couldn't believe it. It was actually easy for him.

ABD: Another striking visual element was the long white runner that was stretched across the stage. Where did the idea come from and what does it mean to you?

MS: That's one of those things we have to clarify narratively. We've almost got it, but not quite. It's the Journey of Acheron. There are seven different rivers that the Greeks believed we would cross on our journey to Hades. I started by messing around with putting Soledad on a sheet and it's a journey from here to there. Where I have to be careful is that it might look great, but is it telling the story? It is... almost. Here is where I've really got to pull back Soledad because the journey should be almost a pleasure. It's a journey to reunite with her dead family. It emerged from a drawing I saw of the Journey of Acheron.

ABD: So you're doing your next presentation of Antigona as a showcase during APAP (The Association of Producers and Presenters) conference?

MS: Yes, there are two reasons for that. I needed to do the show. Right now it's not contracted. There's ISPA (International Society for the Performing Arts) and APAP going on and all the presenters are here so I'm going to have them come and see it. The other reason is that the artists and I have worked so hard for a couple of years and we've only done five shows. We really need to do the show. We're going to do twelve shows and work and work to get it out of our heads and into our bodies. We're doing it at the Pearl Theater, a really nice theater. We're going to let it grow and hope that it gets contracted out. 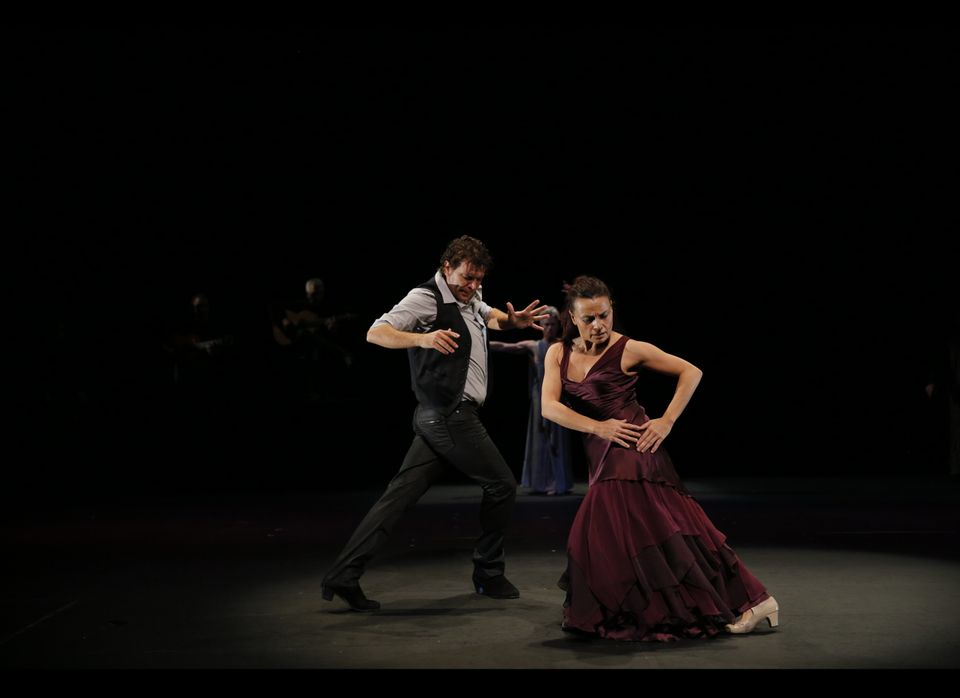