Josh Hutcherson isn't shy when it comes to his support for same-sex marriage and LGBT rights. "The Hunger Games" star recently posed along with the co-founders of Straight But Not Narrow -- a campaign he started that mainly targets straight males to positively influence their views on LGBT teens -- in a photo shoot for NOH8.

The NOH8 campaign -- created by celebrity photographer Adam Bouska -- is an artistic social movement and form of silent protest in response to Proposition 8, the amendment passed in 2008 reversing same-sex marriage laws in California.

SCROLL BELOW TO SEE PHOTOS.

The photos of Hutcherson and his fellow co-founders -- Avan Jogia, Heather Wilk and Andre Pochon -- were posted on Straight But Not Narrow's Facebook page. In the video above, Hutcherson introduces the campaign's mission by poking fun and making light of the issue.

"...[the campaign] hits close to home for me. I have a lot of gay friends in Los Angeles," Hutcherson told SamaritanMag.com. "My roommate's gay and I lost two uncles when I was young to AIDS, so it's an important cause in my family."

At 19-years-old, the actor became the youngest person ever to be honored by GLAAD when he received the Vanguard Award for his work with the LGBT community last year. Keep being awesome, Josh.

What do you think of Josh Hutcherson's new photos? Which other teen celebrities would you like to see promoting equality? Sound off in the comments or tweet at @HuffPostTeen. 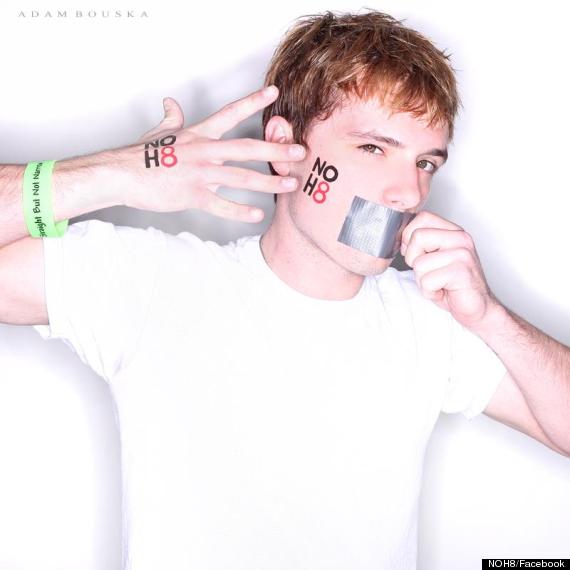 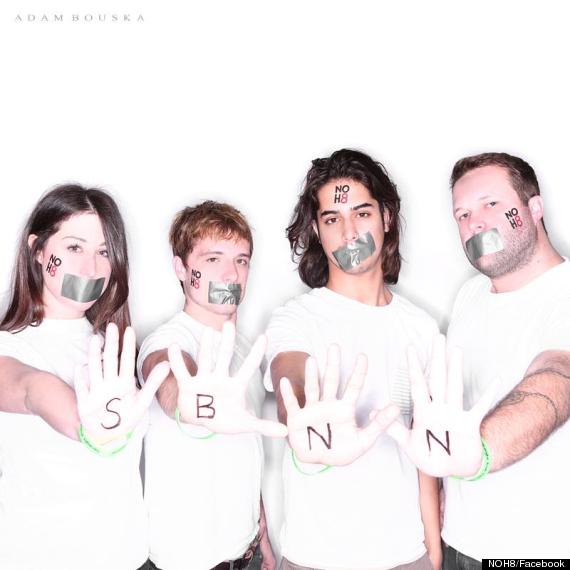 NOH8 Campaign: 'Hunger Games' Star Josh Hutcherson Shows LGBT Support With NOH8 Pictures (PHOTOS)
The Most Inspiring GSAs
1 / 9
Waverly High School - Waverly, Illinois
In December 2011, GSA president Jane Schmidt attended Michele Bachmann's town hall meeting in Iowa to challenge the politician's position on same-sex marriage. Schmidt asked, "What would you do to protect GSAs in high school an support the LGBT community?" A video clip of the meeting went viral and her story was picked up by newspapers across the country, including the <em><a href="http://www.washingtonpost.com/blogs/compost/post/michele-bachman-gets-things-straight-on-gay-marriage/2011/12/01/gIQAFKgwHO_blog.html" target="_hplink">Washington Post</a></em>.
YouTube