On Feb. 15 Adam Bouska, Jeff Parshley, and I were in Washington, D.C. for "NOH8 on the Hill," the exclusive NOH8 photo session we set up especially for members of Congress. We thought we might be able to persuade a couple of Congressmen to take part. This is an election year, after all. What actually happened exceeded our wildest expectations.

By the end of the day, 10 members of Congress had posed for NOH8 portraits. Ten! You can see their pictures in the slideshow below and read the statements of support they gave to us to issue with their photos. With anti-equality politicians currently talking out loud about constitutional marriage amendments, reinstating DADT, and the like, I cannot overemphasize how important and refreshing it is to see 10 of our elected officials stand up and visibly demonstrate their support for equality. The statements they've issued for us to publish with their photos are powerful. I'm not ashamed to say they bring a lump to my throat.

Importantly, these 10 members of Congress represent not only districts on the East and West Coasts but the states in between, as well: California, Oregon, Colorado, Ohio, Massachusetts and Washington, D.C. Four are men, six are women, and only one identifies as LGBT.

I would like to give special mention to Rep. Dennis Kucinich, whose early commitment to taking part gave us the confidence to go ahead with the shoot. He became the first member of Congress to pose for a NOH8 photo when we took his photo early on the morning of Feb. 15. The rest of the day was spent waiting for meetings to end, votes to be taken, and opportunity to present itself. We passed some of the time watching CSPAN in the hotel room we'd rented for the day and by chance got to watch Rep. Earl Blumenauer deliver an impassioned speech on the House floor. Half an hour later he was standing in front of us with a NOH8 transfer on his face, posing for Adam.

Although all 10 of the members of Congress who took part in NOH8 on the Hill are Democrats, I would like to highlight that Adam, Jeff, and I reached out to Republicans and Democrats alike. It is unfortunately a simple statement of fact to record that no Republicans took us up on our offer to have a NOH8 photo taken.

Rather than talk about those who didn't take part, however, I want to highlight those who did. Look at their photos and read their statements. Read Congresswoman Barbara Lee say, "Hate does not belong in our communities, families, schools, or the workplace, and certainly not in our government." Read Congresswoman Lynn Woolsey's statement, in which she says, "I believe this is the defining civil rights struggle of our time -- where you stand today on marriage equality will determine how you are judged by history." Not only did these men and women take time out of their busy schedules to take part in NOH8 on the Hill, but they take time out of every day to effect the change they want to see in the world. They lobby, they speak, and, most importantly, they vote.

In addition to the members of Congress who took part in NOH8 on the Hill, there are two more people I would like to thank: Adam Bouska and Jeff Parshley. These two men, and the wider team back at NOH8 headquarters, do a truly amazing job for our community. The NOH8 Campaign is truly extraordinary, and I encourage everyone who believes in equality to take part when next a NOH8 open shoot comes to a city near you. 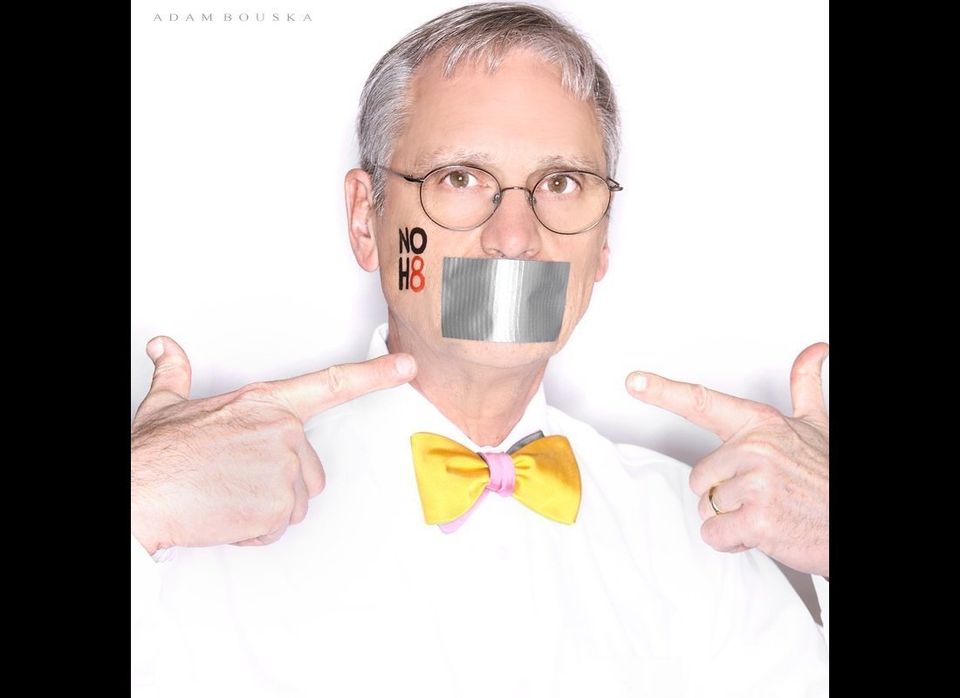 1 / 10
Congressman Earl Blumenauer (D-Ore.)
"On the same week that Maryland and Washington stepped up for marriage equality, I stood with NOH8 in solidarity with those who are fighting Prop 8 in California. Gay and lesbian Americans are part of the fabric that makes this country strong. The notion that we could ask these men and women to do everything from paying taxes to serving our country in uniform while denying them the right to marry is offensive to everything I believe in as a public servant. I won't stop working for equal rights in Congress until they have been extended to every American."
Adam Bouska For NOH8