Whew, I made it through Mother's Day intact this year. Mothers who have lost a child know that a holiday which should be joyous can literally suck the life-force out of you. Regardless whether your child died in utero, or was pushing 65, it's not right to have a child die before a mother. It's supposed to be the other way around. 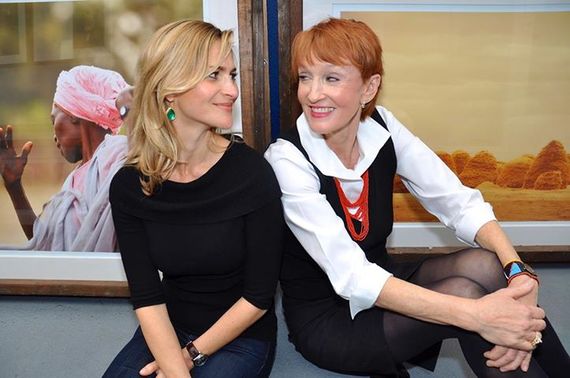 For years, I dreaded the day when the glaring absence of my son Dan, a Reuters photojournalist killed in Somalia at the age of 22, carved an even deeper hole in my soul. Despite the efforts of my daughter, Amy, four years younger than Dan, to make it feel happy, I resented Hallmark for foisting the holiday on me, and, to be honest, I also unfairly resented other mothers who still had their full quotient of offspring.

This year, I didn't dread Mother's Day, because I found an antidote to the deep sorrow it used to trigger within me. I hope by sharing my story that I can help others find peace -- and even joy -- after the loss of a child.

Soon after Dan was killed, I recall myself on the floor, sobbing and writhing, when I heard a little voice in my head say, "Don't worry, everything's going to be all right." Startled, I sat up and looked around me, for the voice seemed to be my son's. I leaned forward and listened inside, aware that I was being urged to do something to transform Dan's death, something that would help me get through the intense pain that I was feeling. I had no idea what I might do, but I knew I had to do something. The prompt was to lead me on a healing journey that continues to this day.

Curiously enough, just making the commitment to finding purpose seemed to help me get through the difficult weeks and months that followed. Suddenly I had a reason to get out of bed and engage in the world around me. I started simply, tending a potted plant that I bought in honor of Dan, then I helped create an exhibit of his photographs and those of the three young men who died with him. Feeling the deep loss of my son in my life, I decided to unofficially adopt what I called my "fairy godchildren," young people whose energy stirred new life in me. Over time, those wonderful individuals, scattered around the world, have brought me love and joy beyond my wildest imaginings.

As I made my way through the dark tunnel that engulfed me, I often felt as though Dan was guiding me, nudging, cajoling, urging; an often noisy, sometimes annoying spirit who wouldn't let me rest until I found my way to the light -- and to new meaning in my life. Whether that "noisy spirit" was just a figment of my imagination or real doesn't really matter, because just having a way to celebrate and commemorate my son has helped me heal.

In 1998, my daughter Amy and I launched Creative Visions Foundation to support 'creative activists' like Dan, who use media and the arts to catalyze change. It's a global organization now, offering a home for more than 200 projects and productions that create awareness and ignite action. As we have traveled around the world for the foundation, we have met many other individuals who have lost loved ones, and like us, have found new purpose and meaning in their lives by creating projects, organizations -- even movies or movements as a result of that loss.

Their stories have inspired us to start the "Noisy Spirits Club," an informal gathering of people who have done something to commemorate and celebrate the person who is no longer physically present. This week, we'll celebrate the noisy spirits of other mothers who have lost a child: Julie Garner, who turned the loss of her son, Hunter, into a national movement against texting while driving and Ellen Shane, who has founded a vital organization after the death of her daughter, Emily, killed by a reckless driver. Each of these "Noisy Spirits" is a vital - and inspiring - force for good.

You can read their stories -- and more -- on Sanctri.com, a Facebook app that provides a safe place for you to commemorate and celebrate someone who has died -- and to find new purpose and meaning in your life. Please share stories about others who have found new meaning after death on Sanctri -- and tell us who else should join our Noisy Spirits Club!

Kathy Eldon is co-founder of Sanctri. Her memoir, "In the Heart of Life," (Harper One) describes her journey from the loss of her son Dan to launch the creative activist movement.