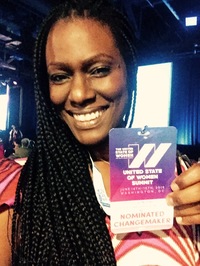 Over 10,000 nominations were submitted by or on behalf of women around the world for an opportunity to attend the inaugural launch which celebrated the work being done by women's rights advocates to advance the global state of women. In light of my work with female survivors of sex trafficking and rape in the developing world, I was one of those chosen to attend the Summit in person and honored as a 'Nominated Changemaker." It was certainly flattering to be acknowledged by the White House, to be considered a "Changemaker" for simply engaging in what I feel is my obligation and duty to our broken world.

Hour after hour, speaker after speaker, 5,000 attendees remained engaged, eagerly awaiting a direct and focused call to action as well as concrete solutions that could readily be implemented to effectively change the #StateOfWomen in our world. For me, that focused call to action never fully came and as I boarded my train back home, it dawned on me that the real "Changemakers," i.e., the millions of women and girls whose recycled bodies have contributed to generating a $150 billion global trafficking industry, deserved a much bigger seat at the table of conversation. These are the women whose exploited bodies are the money makers, the ones who have generated financial "change" for thousands of traffickers around the world.

The sex trafficking of women and girls is one of the worst human rights abuses of our time. In 2012, it was estimated that approximately 20.9 million people around the world were trapped in what is now commonly referred to as modern day slavery. The Global Slavery Index has more recently placed that figure as high as 45.8 million. 98% of the victims of forced sexual exploitation are women and girls. Statistics further indicate that sex trafficking has been identified in almost every country around the world. However, it is undisputed that it is particularly rampant in some.

One of those countries is my homeland of Nigeria, the self proclaimed "Giant of Africa" which boasts the continent's largest economy. Yet, it is estimated that 70.8% of its 180 million people live on less than a dollar a day. Latent in these contrasting realities is Nigeria's sex trafficking epidemic. According to Nigeria's National Agency for the Prohibition of Trafficking in Persons (NAPTIP), the federal agency which was formulated in 2003 to address the issue, 60-80% of all women trafficked into Europe's multi-billion dollar sex trafficking industry are from Nigeria. Of the women hailing from Nigeria, estimates suggest that over 90% are from Edo State, historically famous for its rich culture and nobility, but now infamously referred to as "the most endemic source of human trafficking in Nigeria." It is also my home state. 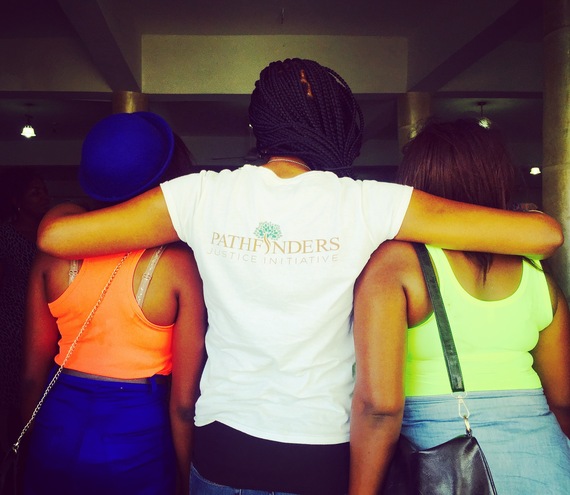 It is within this climate and under the toxic pressure of poverty, minimal education and little to no economic opportunities that an overwhelming number of young self nominating "Changemakers" have emerged. These young women, whose prospects of the future appear rather bleak because of the foregoing, often volunteer to be trafficked abroad because they view prostitution as an alternative to poverty.

In Edo State, where most of our work with survivors of rape and sex trafficking is conducted, the Edo to Europe sex trafficking pipeline is rampant. Our informal research indicates that one out of every three young women in the State has been recruited by a trafficker to work in Europe's sex trafficking industry. More and more are heeding the call, believing that they will find refuge in the alluring arms of Europe. The exact opposite is true.

The debt bondage scheme is not complicated. A trafficker or recruiter, often a woman who was a former trafficking victim herself, approaches a young prospect at a market, at her school, in church but most often in her own home. Family members are informed by the trafficker that the young woman has the potential to pull the family well out of poverty by traveling to Europe where she may work in prostitution for a short period of time on her own terms. Facing immense family pressure, the young woman agrees and promises, usually pursuant to an oath administered by a local juju (voodoo) priest, that she will repay a "reasonable" loan (often what she believes will be a $5,000 smuggling fee) to the trafficker to cover her travel costs and accommodation.

Victims are usually trafficked into Europe (Russia, Italy, Spain, Netherlands and Belgium) by air and/or by land and sea across the Mediterranean, their passage often aided by the trafficker's finely tuned network which includes multiple actors, such as government officials in passport agencies, embassies and customs and border control. Increasingly, however, victims are being killed along the way by an even larger emerging network of organ traffickers who can secure upwards of $500,000 for a human heart on the black market. Others drown on the precarious boat ride from Libya across the treacherous waters of the Mediterranean. Assuming a victim makes it to Europe, she is immediately stripped of her passport and forced into prostitution on the trafficker's terms to pay back inflated smuggling fees or her "loan," which averages $50,000. If she refuses, she is brutally beaten, starved and raped. There are no negotiations.

I work tirelessly to raise awareness about the reality of this debt bondage scheme and endeavor to discourage women from embarking on a trip from which they may never return. Yet, each year, thousands of young women from my home state continue to offer up their bodies as self nominating "Changemakers" for traffickers who see them as nothing but that.

The problem is massive. Why? Because there is a global lack of political will to eliminate trafficking. Beyond Nigeria, the world should care, not simply because of the impact of sex trafficking on human rights, but also because turning a blind eye to this evil fails to consider the value of women as essential economic building blocks of society. Research has elucidated the fact that women, when economically empowered to work as legitimate "Changemakers" for themselves, invest a higher proportion of their earnings back into their communities than men. In other words, both freedom of choice and economic gain underpin personal and national productivity.

Women are not vulnerable. They are not weaker. The reality is that they are intentionally rendered vulnerable by society's failure and unwillingness to prioritize who they are and what they potentially bring to the economic table. Until a shift in that antediluvian mindset is made, the problem of sex trafficking and self nominating "Changemakers" in Nigeria and elsewhere will persist and continue to generate diseased souls.