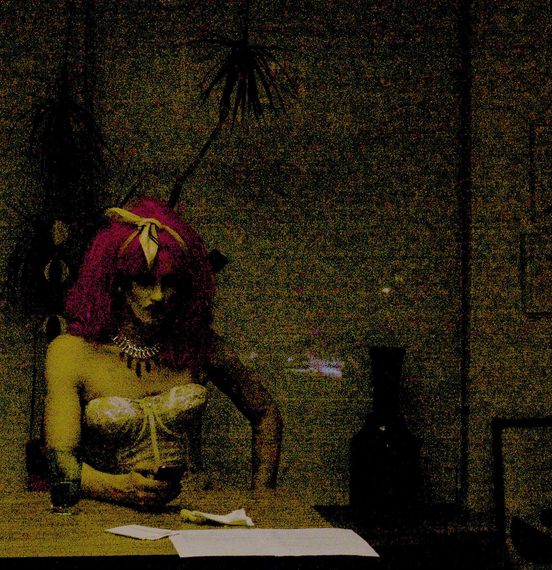 Oscar Wilde, the original drag queen, said that we should treat all the trivial things of life seriously, and all the serious and studied things of life with sincere and studied triviality. It is in that spirit that I will proceed to throw a rather serious tantrum on the apparently trivial matter of Facebook names for drag queens.

This issue has already received some media attention, and the details don't need to be comprehensively rehashed, but here's the bare bones: Facebook has been laying down the law on its "real names policy" in a way that's disproportionately affecting the drag community. The mechanics of this are easy to understand: we're a small and tightly knit online population, and each one of us is no more than 2 degrees of separation from any other. Having realized this, some genius at FB headquarters seems to be going through the friend lists of a few well connected queens and deactivating anything that looks like it might be wearing a wig.

So, in a matter of days, an online oasis of Rubies, Rapunzels, Mistys and Merries has been demolished into a junkyard of Richards, Ryans and Kens. This is more than just a bummer, it amounts to the extirpation of a way of life we've put a great deal of time and effort into cultivating. The trouble, however, lies in figuring out just how angry we deserve to be about it.

After all, nothing would seem more trivial than a cross dressing clown's preference for one name over another. But drag, as a philosophy, and as a lifestyle, is grounded in reverence for the trivial, and for those of us who live this life, the name is a serious business. Latonya Rent, Wendy Ballsdrop, Dildo Swinton, Sheefa Loffa-Sofa, Betty Betty Nice: as ridiculous as some of these names may seem, they're the names by which we introduce, express and promote ourselves, by which we operate and refer to each other, by which we are fondly known and even loved. Often they represent a person's staggering effort to create a stable identity from the bafflement and ruin of their accumulated experience as an outsider. We are not necessarily born drag queens, and in that respect we do not have rights like those that must be afforded our transgender brothers and sisters. But we become, and we remain, drag queens against the odds, and through a commitment that is much more of a calling than a choice. In what follows, therefore, I will attempt to defend not our right to use our chosen names on Facebook, but rather my earnest wish that we be allowed to do so.
 

It should be explained that until now, Facebook has worked brilliantly for us. The recent efflorescence of drag culture has much less to do with certain television reality shows and much more to do with our newfound ability to archive and share our pictures and opinions, to invite people to events and to in general operate as human individuals in the context of an online community of peers (a community which, by the way, maps accurately onto our real lives) under the unifying label of our drag names. We've integrated Facebook into our personal and professional lives in ways that should make its creators vomit with gratitude, but apparently we have been doing so in violation of their terms of service, which state that

"the name you use should be your real name as it would be listed on your credit card, driver's license or student ID."

The moral justification for this not-at-all-creepy rule is given on their website as follows:

"Facebook is a community where people use their real identities. We require everyone to provide their real names, so you always know who you're connecting with. This helps keep our community safe."

As it happens, drag is also "a community where people use their real identities," since a drag persona is no less real than any other persona, particularly one presented in the context of the internet. We are real people, these are real names. No educated person would define the reality of one's name by the degree to which it conformed to that on your credit card. I do not know, nor would I care to know, the names that would appear on the IDs of the vast majority of friends in my social group. To me, their real names are those by which I know them socially, which ought to be the only relevant factor in the context of a social network.

It should come as no surprise that within our community we have not had (until these recent changes) the slightest trouble "knowing who we're connecting with," because our drag names are more memorable and accurate expressions of our personalities than those that were haphazardly assigned at birth. Who the fuck is James Smith or Dan Chapman? I don't remember meeting these people. The outcome of this policy is not consistent with its stated intentions.

Most of all, these pseudonyms turn out to be the very things that "keep our community safe" from discrimination in the workplace, or from the prying eyes of hateful family members and hometown gossips. They protect our birth names such as they would appear on a job application or medical record from the random people we encounter as part of our nightlife work, and, in doing so, provide the buffer of slight anonymity that makes our outrageous form of self-expression possible.

(Finally, if you want a laugh, the same policy FAQ warns that "pretending to be anything or anyone isn't allowed," as if pretending to be something you're not weren't the essence of all social media)

If you're beginning to think that Facebook's justifications for this policy are manifestly ambiguous and unsatisfactory, you are not mistaken. A mere desire to eliminate bots and ensure a one-to-one ratio of humans to profiles is insufficient reason to demand that everyone's birth name be made available to the entire internet. That information can be supplied in private, and I'm sure most drag queens would be more than happy to submit ID as proof of personhood. But shockingly Facebook doesn't seem to want IDs. In no instance have I heard of them requesting a drag queen to submit proof of name in the form of identification. Instead, queens are admonished to supply their real names on penalty of deactivation, without the option to contest or dispute, and re-granted access to their accounts only on condition that their name does not sound too outrageous (the name I eventually gave was accepted because it sounded as if it were real, not because it was.)

What I and many others suspect is that this is part of a targeted effort, not to eliminate public personalities, but to transition them over to the pay-to-play structure of the "Fan Page." These pages bear a passing resemblance to a personal profile, but are clearly structured as advertising platforms, so that at every turn one is encouraged to "boost" one's content in exchange for money (you know, just like you would between friends...) 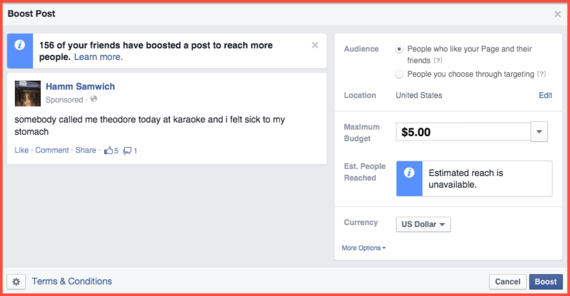 This strategy makes sense if you are, say, a SodaStream or a Tide Pen. But for the most part, drag queens are not and will never be famous enough to merit fan-pages, and will certainly never have the resources to "boost" content on that scale. The standard profile gave us an opportunity to exist on the record, on our terms, as human beings, in something other than the dingy nightclubs to which we'd be otherwise relegated. The profiles were a record of our photographs, our thoughts, our opinions, our interactions with others -- in other words: our lives -- just as they are for every other human being currently allowed to use the service. We've been denied this privilege, but it remains available to those other people, for no other reason than that our names seem to be flamboyant, while theirs do not. That strikes me as not only unfair, but lame. And I'm not sure if, in its notorious struggles to capture the interests of a younger demographic, Facebook can afford to be seen as lame. Perhaps they would appear less so if they didn't make it their goal to stamp out the freedom to self-create that made the internet so interesting in the first place.

Dear reader, drag is and always has been a parasitic art form. We dress in clothes that were not made for us, in hair that was not meant to be worn by us. We perform songs that were not meant to be sung by us, and in social media, we have exploited systems that were not meant to be used by us. But, in the same way that we fabulously outshine the mortal women for whom these wigs and dresses were originally manufactured, so have we learned to deploy Facebook with a flair and mastery that cannot be expected of its average user. Please allow us to take this dweeby little platform and turn it into something magical.

Our outcry may not make any sense to most people, and that's fine. Safeguarding drag against the onslaught of a world that doesn't necessarily value it is a tricky business, because one is constantly running the risk of taking it too seriously. However, if I've managed to give some justification for the weird heartbreak we're all feeling over this name policy, and to add volume to the discontent that may eventually grow loud enough for those in charge to listen, then I will be satisfied.

As I've said, I'm not sure we have a right to call ourselves by our drag names online. We did agree to Facebook's terms of service, and we were acting outside the rules (just like we've always had to do in every situation throughout our entire lives as queer performers). But if our existence is to be this tightly bound up in social networks, we should at least give ourselves the chance to agitate and improve them in our favor, since, at the end of the day, an arbitrarily enforced real-names policy is a scary prospect for everybody, not just those of us named after dildos and sandwiches.