Hey, it's been a while since we've had one of those webvertisements from those panicky, anti-gay marriage, Cavity Creeps known as NOM, but here you go! "Think same-sex marriage doesn't affect your family?" the voice-over narration asks. And the answer of course, is, "No. I actually know, for a fact, that same-sex marriage doesn't affect my family, except that my family is sad that the gay friends of my family cannot get married, for no reason!"

But let's humor NOM, because that's what they live for, I guess. According to this ad, gay marriage has two effects on our families. One: our children might become aware of the existence of gay people, and the fact that they want to get married! Some teacher in California had the nerve to suggest that a gay wedding might be a "teachable moment" for her students. OH NOES! The great unraveling begins!

But, "it's not just kids who face consequences," the ad warns! As NOM says, "The rights of people who believe marriage is between a man or a woman will no longer matter." Uhm...but they don't really matter now! What "rights" are these? In a world where gay people are getting married, one's "right" to "believe" that's wrong goes on and on. Everyone, at one point or another, "believes" they should have the right to do things they want. It sounds to me that those who believe marriage should remain defined as being "between a man and woman," will simply be joining the rest of us in a grand American tradition known as "sucking it up and dealing with it."

Jonathan Chait took up the issue of these supposed "rights" and found them similarly nonsensical:

...Rudy Giuliani framed his own thinking in similar terms: "Marriage, I believe, both traditionally and legally, has always been between a man and a woman and should remain between a man and woman." (In Giuliani's case, he means a man and one woman at a time, though some romantic overlap may be unavoidable.)

Gay marriage opponents have made that formulation their mantra. It's a really strange way for them to summarize their argument, because it's not an argument at all. If we're debating health care, one side will have a line about big government, and the other will have a line about the uninsured or spiraling costs. If we're debating torture, advocates will mention the need to make terrorists talk, and opponents will invoke American values. Soundbites, by their nature, can't express much logical nuance, but they do tend to give you a reason to agree with the position.

The anti-gay-marriage soundbite, by contrast, makes no attempt at persuasion. It's like saying you oppose the Bush tax cuts because "I believe the top tax rate should be 39.6 percent." You believe that marriage should be between a man and a woman? Okay! But why?

NOM should read Chait's entire piece, because it seems to me that there are many things to learn from him. As for me, here's my teachable moment. MARRIAGE IS SPELLED M-A-R-R-I-A-G-E. 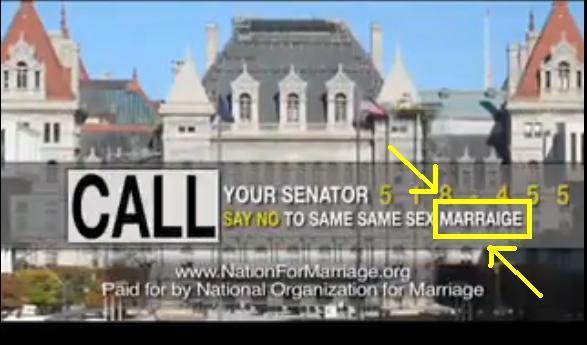 YES. Call your senator and ask him to "say no" to "same same sex marraige!"

RELATED:
Until Logic Did Them Apart [The New Republic]