Despite the constitutional guarantee of the right to a secret ballot, it seems gone are the days when it was customary to keep one's vote to oneself.

Social media erupted Tuesday with a flurry of photos of voting booths and ballots and status updates declaring whom users were voting (or not voting) for. It seemed everyone was sharing stories of their experiences at the polls and their opinions on who should become the next president of the United States.

Yet not everyone was flocking to their polling centers. In each election cycle, many Americans opt out of exercising their right to vote, and according to MSNBC, 40 percent of eligible voters are expected not to turn out on Tuesday. Some won't make it to the polls due to voting challenges brought on by Hurricane Sandy, which displaced thousands from their voting districts in many states. But others just don't want to vote -- and they're not afraid to talk about it.

Bloggers like Daniel Rudin of Rappler.com have taken to the Internet to explain why they won't be voting for either candidate, citing the "system" as the issue.

"Although in the short term, failing to vote is a grave failure, in the long run, a vote for the dual-party system will prove the greater failure," Rudin wrote.

Others took to social media, tweeting and Facebooking their anti-voting stances. 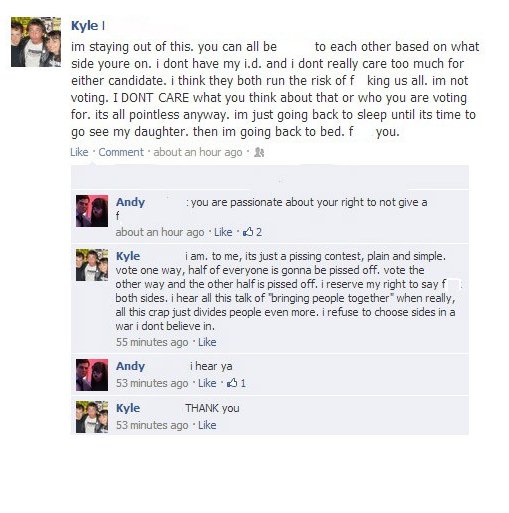 Beyond disenchantment with the available candidates, many expressed the idea that their votes didn't matter because the Electoral College ultimately decides the winner in the presidential election. 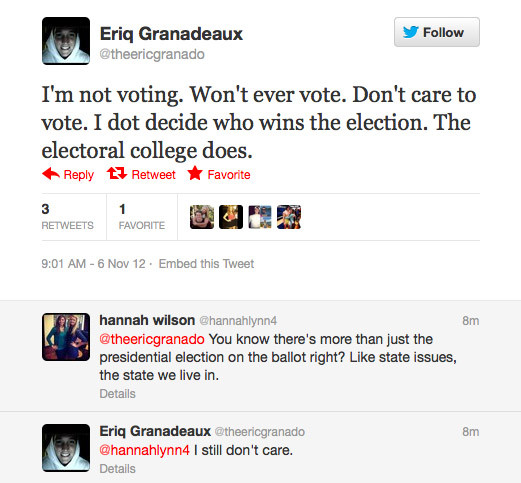 While the Electoral College provides an effective bogeyman, when it comes to social media, your political opinion can have a profound effect on others -- and be valuable to political campaigns. According to LiveScience, politically opinionated Facebook users with many friends can have a significant effect on their friends' voting decisions.

"If we had a popular-vote election of the president, where which state you lived in didn't matter, you would likely see many more national campaigns trying to mobilize a much more national constituency," political scientist Lyle Scruggs told LiveScience.

(Check out an estimate of what your own vote may be worth to campaigns with this online calculator, made by online-privacy company Albine.)

But non-voters, beware: Once you open up your Facebook page or Twitter account as a political forum for your beliefs, you risk the chance your friends and followers will have opinions, too. 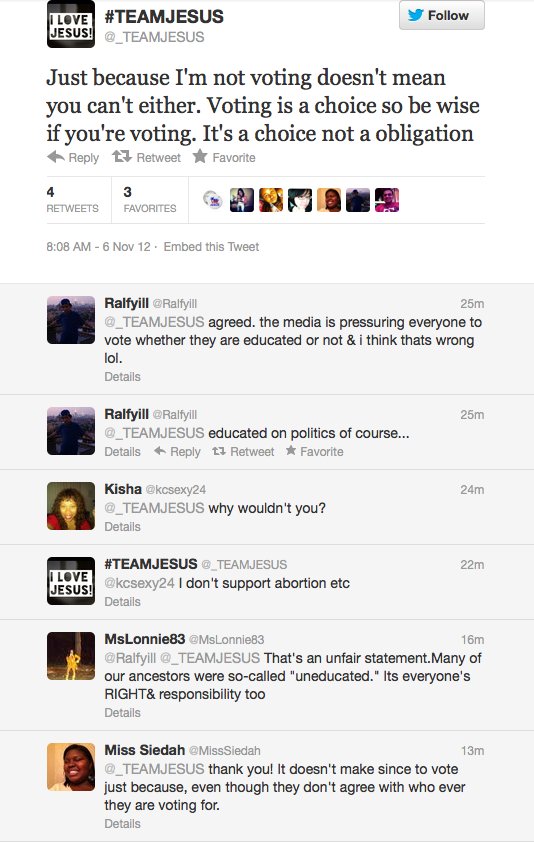 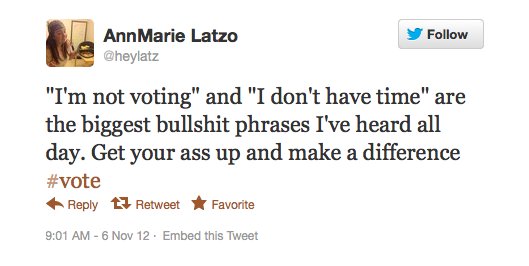 PHOTO GALLERY
'I'm Not Voting' And Social Media
Download
Calling all HuffPost superfans!
Sign up for membership to become a founding member and help shape HuffPost's next chapter
Join HuffPost