Warning: This article contains nudity and may not be suitable for work. 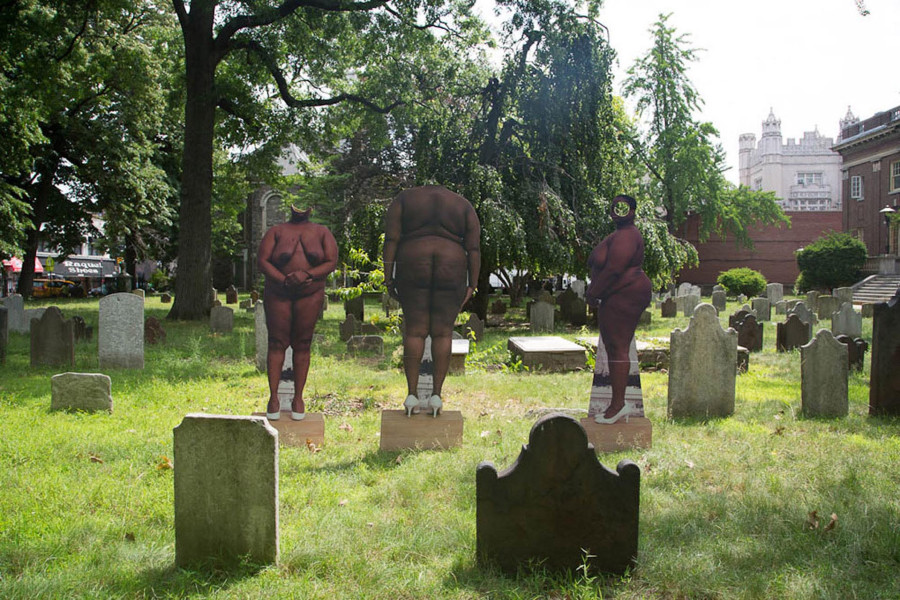 "From My Body I Will Make Monuments In Your Honor", Pre-revolutionary Cemetery, Brooklyn

Slavery was introduced to Manhattan (then New Amsterdam) in 1626 and, for two centuries, remained a significant part of New York life. In fact, the New York City Common Council declared Wall Street the city's first official slave market on December 13, 1711, deeming it a space where human beings could be enslaved for the day or for the week. The slave market took the shape of a wooden structure with open sides, and held approximately 50 people at a time. It operated as such, on the corner of Wall Street and Pearl Street in the heart of the Financial District, until 1762. Slavery was legally abolished in New York in 1827.

Wall Street's odious history has since been covered up, while New York's reputation as a space of diversity and inclusion continues to blossom. But what remains of this 200-year period of discrimination, oppression and hate? What residue remains caked to the skeleton of the place, beneath the sky-high buildings and engorged American flags? 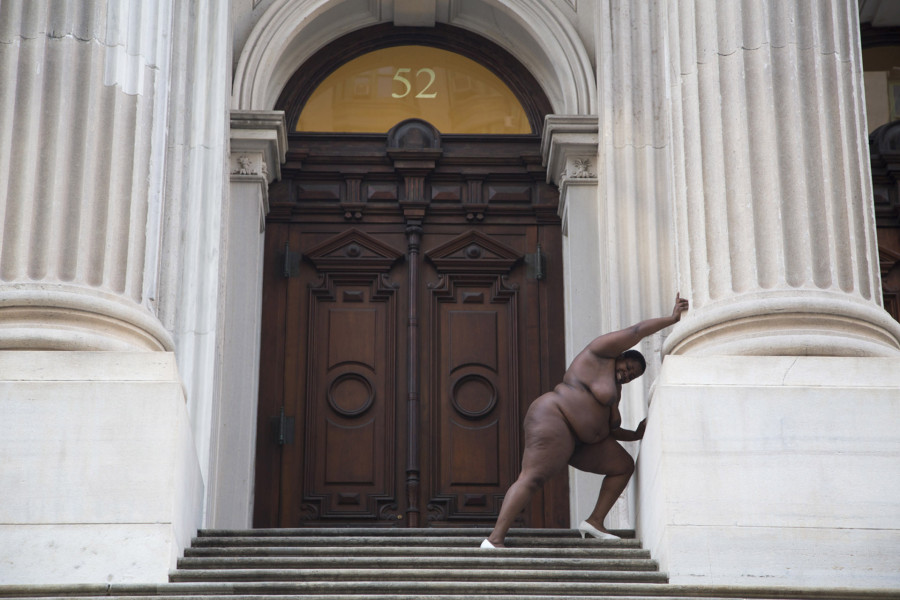 "They Tagged the Land With Trophies and Institutions From Their Conquests", New York City Hall

Through her photography, artist Nona Faustine investigates such convoluted spaces, with pasts and presents that don't quite line up. Her photo series, titled "White Shoes," revisits many of the New York locations once plagued by slavery -- from City Hall to the Supreme Court -- capturing the traces that may or may not have been left behind.

"Standing at Wall Street at the exact spot where they sold Native and African men, women, and children 150 years ago, I wasn’t able to feel any of the horrific sorrow and pain of the activities that once went on there," Faustine explained to The Huffington Post. "Perhaps it was a defense mechanism that wouldn’t allow me to tap into that for fear of crumbling. What I did feel was the energy of New York City, an incredible force. There I found myself at the curtain of time between two eras, past and present. I went into a deep reflection."

Visiting these sites, Faustine added, does feel spiritual at times. "My eyes are wide open, and still I’m there and not there. My body is pumping with adrenaline. My anxiety is extremely high. During all that, you filter out as much abstractions as possible so that you can maintain some sort of composure for the camera as people, cars and buses go by. My senses are elevated. Sounds in particular I hone into. I have this feeling of being watched, by something or someone not actually there at times. I’m extremely aware of my presence in these places." 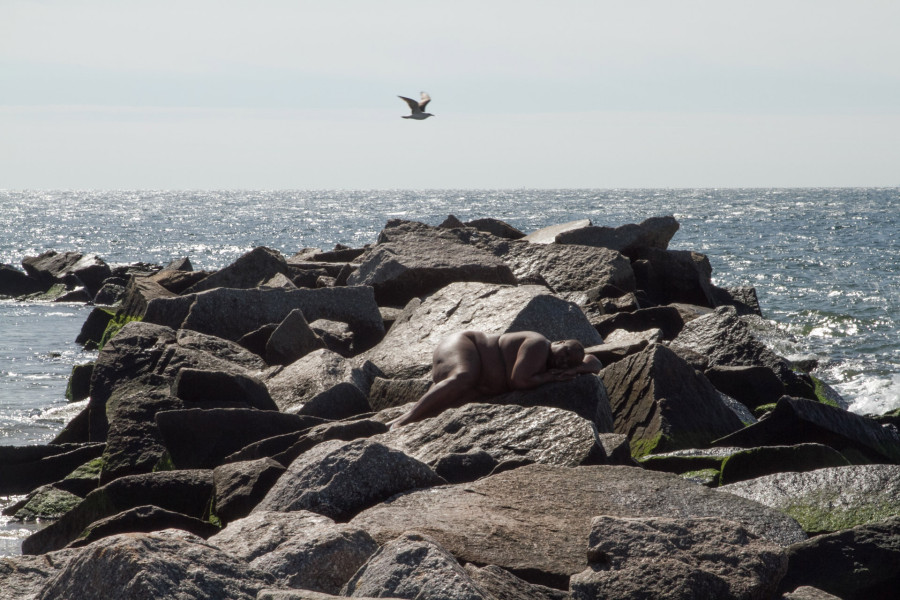 "Even The Comfort of a Stone Would Be A Gain", Atlantic Coast, Brooklyn

Faustine grew up in Brooklyn, specifically Crown Heights and Flatbush. She received her first camera as a child, a gift from her uncle, and referred to the object as a "magic box" for its otherworldly power over her. "The thing that really pulled me to photography was my family album." Faustine's father was the family photographer. "It tied me to my past so strongly. Looking at those pictures over and over, as new ones were created, the faces and places reinforced who I was."

Faustine was inspired to embark on the "White Shoes" series after encountering a daguerrotype of a seminude, enslaved woman named Delia. The photograph was taken by J.T. Zealy and commissioned by the naturalist Louis Agazzi in 1850 in South Carolina.

"I came across Delia's image in Carrie Mae Weems' piece 'From Here I Saw and I Cried' in the '90s," Faustine explained. "Over the years, Delia's image came in and out of my consciousness in various ways. She reached out across the centuries, and left me to imagine her life: the indignity of the moment her picture was taken and the activities before the shutter clicked. Whether there are actual tears in her eyes or a slight blur from movement, what photography can’t tell us is the actual horror, or the miserable details of her life. You are only left with the beauty of her features and a haunting gaze contrasted with her nakedness."

Faustine was also struck by the story of Saartjie "Sarah" Baartman, known as Venus Hottentot throughout London and Paris; a Khoikhoi woman exhibited in freak shows throughout the 19th century due to her large buttocks. Faustine came upon her while perusing the gift shop of the Metropolitan Museum of Art. "Instantly I was struck by the circus spectacle of her enslavement. Her captured existence was merely for the entertainment of a European audience that sought to strip her humanity literally and figuratively, thus removing the ability to see this woman as a living, breathing, feeling human being with intellect, instead being treated like an animal." 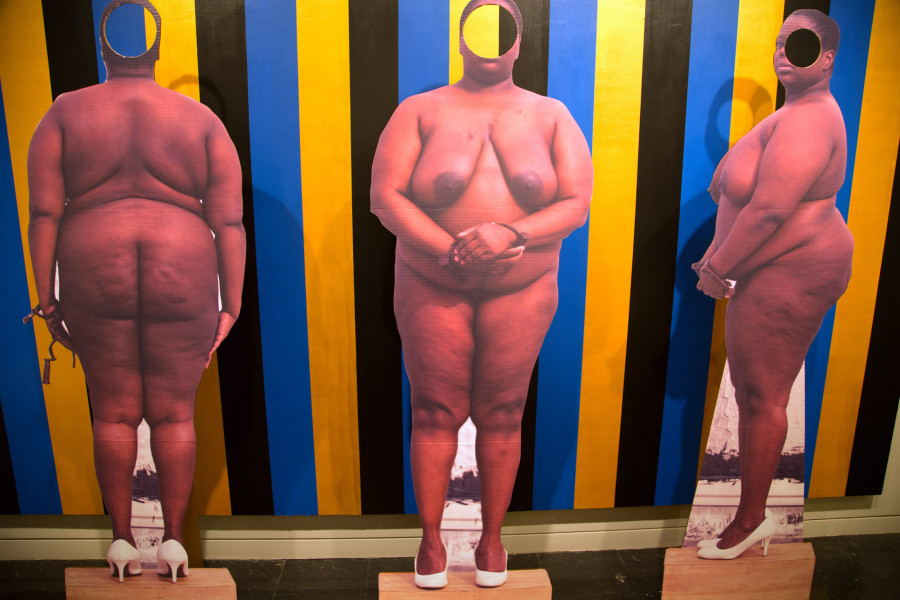 Revisiting the spaces haunted by such atrocious tales, Faustine drapes her body across the implicated grounds like a bold protestor or a spiritual medium. Her bare flesh recalls the stories of so many strangers that went untold, simultaneously raising questions about why bodies matter and, more specifically, which bodies matter.

Faustine cited artists including Zanele Muholi, Lorna Simpson, Wangechi Mutu, Kara Walker and Grace Jones as inspirations, encompassing themes including resistance, hybridity and intimacy between women. The works also recall Carrie Mae Weems' "The Museum Series," a collection of self-portraits, in which the artist visits the world's most renowned artistic establishments that, despite her widespread success as an artist, continue to treat her as an outsider. 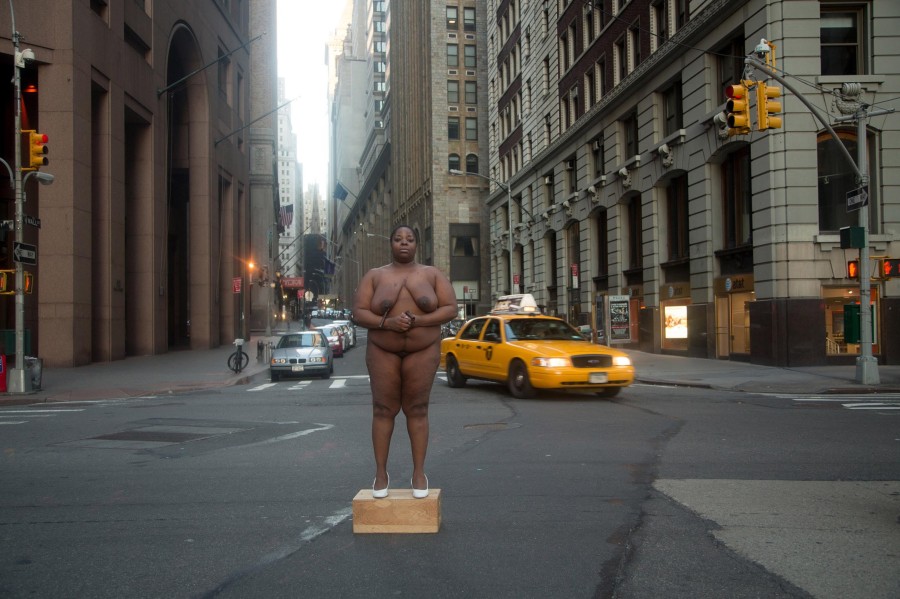 "The images are my truth," Faustine concluded. "My work is situated inside a photographic tradition, while questioning the culture that bred that tradition ... I often feel like an ethnographer or anthropologist. Ours is a haunted, incomplete history, one that contradicts what we are taught about this country and its people. We must acknowledge and pay tribute to those that founded and built this country. Not just some of them, but all of them. Like the thousands of Africans buried under lower Manhattan, there are others in long forgotten places."

In the end, Faustine series lays bare the complex and often horrific layers of history that comprise the pristine images we encounter today. Past and present can never quite be untangled, and Faustine's photos illuminate the hushed voices and invisible bodies too often pushed away as part of an ugly history that yearns to be forgotten. "I do believe as human beings we have a responsibility to improve the course of life in whatever way that we can, and artists have a unique role in that. Artists serve as the world’s conscience."