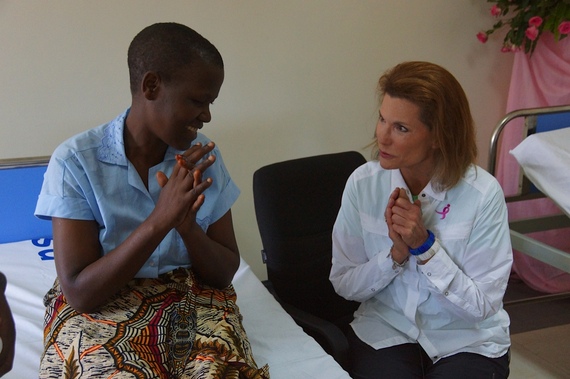 Over the course of the last 30 years, I have watched women's cancers go from being a disease that only affects affluent countries to being a global problem. If there was ever any truth to the notion that cancer is mostly a rich country's problem, the facts no longer support it. The numbers of deaths each year from breast cancer are now equally split between developed and developing countries.

All of us involved in the work of global health, and women's health in particular, need to better understand what we are up against. And a 2014 report by the Council on Foreign Relations (CFR) does exactly that.

I was honored to be a member of CFR's task force on noncommunicable disease (NCD) to study the emerging global health crisis in low- and middle-income countries. NCDs such as cancer, cardiovascular disease, and diabetes are now the leading cause of death and disability in these countries, where they killed almost 8 million people in 2013 before their 60th birthday.

The bottom line is people are succumbing to disease so much faster, so much younger, and with such worse outcomes than they did in high-income countries.

For women in LMICs, it's as if the last quarter-century of medical advancement never happened. When they feel a lump in their breast, or experience the first signs of other cancers, they don't know what it is or what to do. Sometimes women assume that if they don't feel any pain then they're healthy. Often they're too afraid to say anything, much less to look for help -- which in many cases wouldn't be there anyway. This constellation of issues leads women to delay evaluation of breast cancers for months or sometimes years, during which time the cancers can grow and spread.

Sadder still, hundreds of thousands of those deaths could be avoided -- especially among women, who often die from the very cancers that are most treatable and curable. Cervical cancer, for example, can be prevented with the use of a vaccine, or caught in its earliest phases before it actually is cancer with the potential for spread. And among breast cancer cases detected early, the great majority of women now survive once they are provided prompt and effective treatment. And treatment is easier and better tolerated when the cancers they are treating are early.

We face an unacceptable gap between the global crisis and the global response. The U.S. government has not sufficiently focused on the problem of NCDs, and our international development and health programs lag behind. Our task force uncovered that we spend $10 million on NCDs out of a global health budget of more than $8 billion. The global picture isn't any better: Aid for NCDs represented just 1.2 percent of total development assistance for global health in 2011.

Our report presents a path forward to help save women's lives. It is data-driven and presents short-term, medium-term, and long-term recommendations for action and an investment case for each recommendation.

Take cervical cancer, for example. Cervical cancer is the single biggest cause of cancer death for women in sub-Saharan Africa, and also the most preventable. If every HIV clinic in Africa were to offer a simple screening for cervical cancer, the added expense would be slight, and we'd be going directly at the very people most at risk. We must also increase access to the effective vaccines that exist for preventing HPV infection.

The United States and private sector partners should increase their investment in the HPV vaccine and integrate screen-and-treat programs for cervical cancer into PEPFAR platforms, building on the success of the Pink Ribbon Red Ribbon initiative on both fronts. Rarely do you find such a natural pairing of vital missions. In fighting one disease from a platform built to treat another, we can save many lives.

With respect to breast cancer, between 1990 and 2013, premature deaths in low-income countries from breast cancer grew 90 percent. During this same period in the United States, breast cancer death rates declined by one third.

The reason for this disparity is that people in poor countries have little access to the diagnostic tests and curative treatment that is widely available for breast cancer in wealthier countries. The per capita cost of mammography screening exceeds the capacity of many low-income countries to pay, and may not be appropriate for settings wherein women often present with easily palpable, visible, or ulcerated tumors. By contrast, clinical breast exams are affordable (and necessary) for countries at all economic levels and can catch cancer at a much earlier stage for treatment. Appropriate breast cancer treatment depends on an accurate pathology diagnosis, which in turn requires the availability of tissue sampling procedures. Chemotherapy and radiotherapy are available on a limited basis in middle-income countries, but often not in poorer nations.

In response, the CFR task force calls on U.S. leadership to support resource-level-appropriate guidelines for the management of treatable and curable cancers. Breast cancer provides a good model. With the support of the Susan G. Komen organization, the Breast Health Global Initiative was formed and has since produced a comprehensive set of resource-adapted, stage-specific guidelines for breast cancer management including early detection, diagnosis, treatment and palliative care. These guidelines provide the playbook for governments on how to prioritize scarce resources and where to make investments.

There is much the United States and its allies can do to help developing countries meet the NCD challenge at relatively modest cost. By placing the cancer crisis far higher on the global health agenda, we have it in our power to spare millions from needless suffering and death.