Just about all the case studies I read in graduate school made it seem like the only people who make large-scale change in the world are from the corporate or government sectors. Coming from the nonprofit arena, I knew there were powerful stories not being told about how NGO advocates too could positively affect millions of people -- and without a lot of money or inherent power.

While finishing up my degree in 2008, I decided to write a case study that would show future students that -- through smart grassroots organizing, policy analysis, lobbying, coalition collaboration, negotiation, and media outreach -- NGO leaders could tilt the balance of power in the public's interest.

I'm delighted that recently Harvard University published the case (that anyone can purchase and teach) titled "A Green Victory Against Great Odds, but Was it Too Little Too Late? A Case Study About a Fierce Battle to Pass a Major U.S. Energy Bill."

I chose a topic I found timely and exhilarating -- a coalition of environmental groups finally succeeding in getting a federal bill passed to address climate change. Overcoming fierce opposition by powerful industries and many in Congress, the Energy Independence and Security Act of 2007 slashed vehicle pollution by raising fuel economy standards on cars and light trucks for the first time in three decades. The result: less oil dependence, a safer climate, and U.S. consumers would save $20 billion at the gas pump. 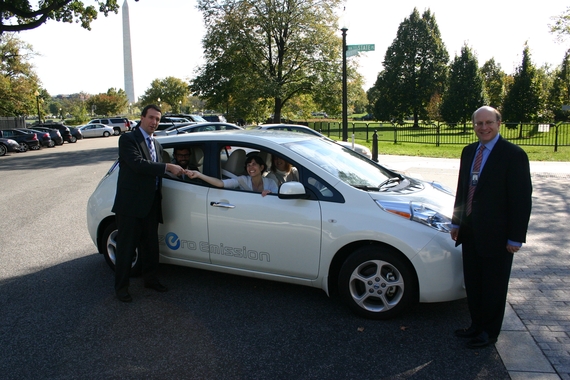 Getting the bill passed was a Herculean effort. Environmental groups had tried and failed to get Congress to require more efficient vehicles for decades. Environmental advocates had made some progress at the state-level, but the U.S. Congress delivered loss after loss. Political leaders beholden to the auto, coal, oil, utility, and nuclear industries -and their deep pockets--were entrenched.

But advocates from groups like Sierra Club, League of Conservation Voters, Natural Resources Defense Council, Union of Concerned Scientists and others from the Green Group felt emboldened in 2006 and 2007 when they were finally poised to collaborate with pro-environment members of Congress who were taking control of both the House and the Senate. They seized upon a public starting to pay attention to climate change through hooks like Al Gore's film Inconvenient Truth. Gasoline prices were rising, and the public was worried about oil dependence because of the wars in Afghanistan and Iraq.

The Green Group worked closely with legislative champions like Nancy Pelosi -- who became Speaker of the House in early 2007. They made their case for the need to address climate change to hundreds of fence-sitter legislators, often waiting to catch a moment in the lobbies outside of Congressional lunches (this type of work is where the term "lobbying" comes from, folks). They mobilized tens of thousands of people to call and meet with their representatives in Congress at times when key votes were about to happen. They conducted polls on messaging and carefully crafted their wording to address the environmental, national security, or economic concerns of their audiences. They sequenced support carefully from the right Republicans, military veterans, and others in Congress, including members of key committees. They held press conferences and got op-eds and letters to the editor published.

They also collaborated with unlikely bedfellows. Labor groups organized voters and legislators to attend Town Hall meetings in the "rust belt" to play up the importance of clean energy jobs. A business and national security group called Securing America's Future Energy played an important role in bringing the White House, key Senators, and automakers to the negotiating table. Veterans and military leaders were mobilized to speak up on the need to slash oil dependence.

President Bush signed the final bill into law on December 19, 2007. It required automakers to increase fleet-wide gasoline mileage to 35 miles per gallon by 2020 and provided incentives for the development of plug-in vehicles. The bill further required that the sale of most inefficient incandescent light bulbs would be banned by 2014, and new initiatives were funded to promote renewable technologies, green jobs training, and energy conservation in buildings.

At the signing ceremony, then Chairman of the House Energy and Commerce Committee John Dingell -- the Michigan democrat with strong auto industry ties who had worked aggressively against the bill -- put his arm around Speaker Nancy Pelosi. What had been a bitter rivalry over new CAFE standards was now a celebrated compromise between older and newer forces in the House. Said Carl Pope, then Executive Director of the Sierra Club, "this bill will make real progress by achieving a quarter of the cuts we need by 2030 if we are to avert the most catastrophic effects of a warming climate."

In the end, the law did fail to set an aggressive renewable electricity standard and some other climate-related solutions the advocates had sought. But the most exciting part of the final bill passed is that it set the stage for President Obama's administration to raise fuel economy and emissions standards on vehicles to much stronger levels still. U.S. passenger vehicles will now be required to average 54.5 miles per gallon by 2025, arguably the single most important policy put in place by any president yet to address climate change. This is one of the key policies resulting in so many plug-in electric vehicles now on the market, which are an essential way for us to reduce carbon emissions.

Did corporate and governmental leaders play a part in achieving this success? Absolutely. But would it have happened at all if not for the tenacity and savvy work of environmental NGOs and their supporters? Not a chance.

If you teach about politics, policy, environmental issues, negotiation, grassroots organizing, or nonprofits, I encourage you to check out this case study (or share it with others). It makes the case for students -- or anyone -- to understand the major challenges we face in solving complex problems and the power of nonprofit advocates to achieve solutions that benefit us all.

Gina Coplon-Newfield wrote the case study described in this article in 2008 while pursuing a Masters in Public Administration at the Harvard Kennedy School of Government. The case, which can be reviewed and purchased here, was published by Harvard Law School's Program on Negotiation in the fall of 2014. Photo courtesy of Gina Coplon-Newfield.

Download
Calling all HuffPost superfans!
Sign up for membership to become a founding member and help shape HuffPost's next chapter
Join HuffPost
Follow Gina Coplon-Newfield on Twitter: www.twitter.com/GinaDrivingEV
Voting Made Easy
Register to vote and apply for an absentee ballot today
Register now