A nonprofit is giving a second life to produce discarded at the U.S. border by distributing it to people in need.

Borderlands Food Bank, in Nogales, Arizona, sits right on the border of the United States and Mexico -- the crossing where over half the produce imported from Mexico comes through, NPR reports. All products must pass a strict inspection prior to distribution, and often cannot be sold if they have even the slightest imperfection.

But before these fruits and vegetables are sent to landfill, Borderlands intercepts the products to try and give them a second chance to feed people in need. Currently, the organization rescues 35 to 40 million pounds of edible produce each year.

“Some produce arrives spotted, or there’s scarring or black dots on the product, but it’s perfectly good,” Borderlands President Yolanda Soto told The Huffington Post. “By rescuing this poundage [of produce] we are able to move it to families who aren’t able to eat nutritiously.” 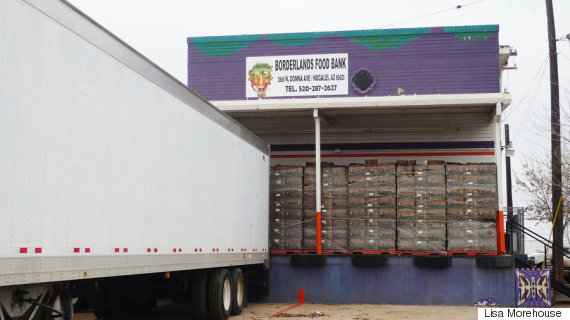 Distributing this rejected -- but perfectly safe -- produce is a massive undertaking. Borderlands works with 200 donors to distribute food to 389 registered nonprofits, in both Mexico and the United States. About 47 percent of those agencies are in the state of Arizona alone.

“We sit right in the middle of a produce industry,” Soto told HuffPost. “Once we saturate Arizona, we then offer produce to 18 other states throughout the nation.”

Soto receives calls all day long from her long list of donors; they know which of their discarded produce she will take. She then sends one of her trucks to retrieve the product to bring back Borderlands’ 13,000 square foot warehouse.

Monday at the warehouse are agency days -- nonprofits come directly to the food bank to take large quantities of fruits and vegetables to bring to their organizations. Tuesday through Friday, Borderland hosts a direct client distribution program. And weekends are devoted to POWWOW: Produce On Wheels - With Out Waste, which distributes produce to communities throughout the state of Arizona.

Borderlands’ impact is widespread and far-reaching, but their warehouse is small. Rent isn’t cheap, and Soto is hoping to find a partner to help Borderlands expand to a space where it can grow.

“If we found a bigger warehouse, we could rescue a lot more,” Soto said. “So much can be salvaged, and there is so much need.”


Bananas, Berries And Melons
"These tend to ripen quickly," says Nicole Fetterly, a registered dietitian with Choices Markets. "Eat them in the first three days of bringing them home. Or freeze berries in a single layer to add to smoothies and yogurt."
Apples, Pears, Oranges, Grapefruit
These fruits last much longer in the fridge and can be saved until the end of the week. "Don’t store your apples and pears with any other fruit or veggie as they give off a gas called ethylene which causes other produce to ripen faster," she advises.
Lettuce
"We’ve all had the experience of opening a clamshell of greens and discovering the slime, so use these up at the beginning of the week," Fetterly notes. If spinach seems to be approaching its end point, steam it all and squeeze out the excess water. Then it can be kept in the fridge longer and added to eggs, sauces, soups or salads.
Fresh Herbs
"Herbs are the best way to add flavour and chlorophyll to your food, but they often go slimy," Fetterly says. Keep basil in a jar of water on the windowsill for weeks — the fridge can turn it black. Other herbs can be kept in a jar of water in the fridge covered in a plastic bag with a few air holes punched in.
Cucumber
"These should also get used up within three to four days. Slice and pack for an easy lunch veggie for the whole family," she says.
Broccoli
"You'll want to use broccoli in a few days to prevent it turning yellowish brown. If you’ve bought too much, blanch it for one minute in boiling water, dry then freeze," Fetterly advises.
Leafy Greens (Kale, Chard, Collards)
"Chard will be the first green to go, so it should be used first within three days. Collards have the most longevity and can keep through the week," Fetterly says. "Kale is somewhere in the middle. If you’re sitting on too much, pack it tightly in a freezer bag then pull out and crumble into shakes, soups and pasta."
Avocados
"Buy them green and allow them to ripen on the counter next to your bananas," Fetterly notes. "Once they are just softening, put them in the fridge where they will keep for a week. Keep the cycle going every week and you’ll always have ripe avocados in the fridge for smoothies, toast and of course, guac!"
Root Veggies And Winter Squash
This includes anything from carrots to potatoes to turnips to celeriac to onions to garlic to pumpkin to butternut squash. "These have longevity!" Fetterly says. "Keep them cool and dark and they’ll easily last a week or two."
Cabbage
This "affordable and underappreciated veggie," according to Fetterly, has great longevity, so use up the lettuce for your early in the week salads and save the cabbage for Thursday night coleslaw. "Shred half a head and marinate with salt and vinegar or lemon to soften then add extra virgin olive oil and fresh herbs for flavour."