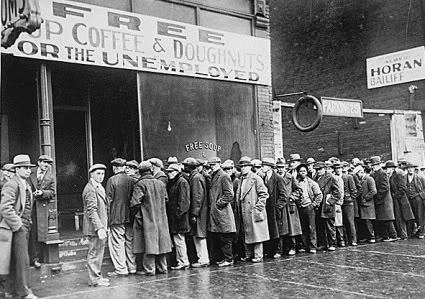 According to Scott Allard of the School of Social Service Administration, University of Chicago, assistance from nonprofits is even more critical in today's down economy because the needs are greater but,

"Economic hard times also cut into tax revenues and cause governments, especially at the state and local level, to reduce funding. Because poor people lack political clout, social service programs are among the first places governments look to cut spending."

" Services are mainly funded by government grants and contracts, but typically delivered to millions of people through local community-based nonprofit organizations. Programs for low-income Americans currently spend somewhere between $150 and $200 billion annually from both public and private sources. For every dollar spent on cash assistance, the United States spends about $15 to $20 on social service programs. Americans prefer to help the poor this way -- through community-based nonprofit organizations that stress personal contact."

Nonprofits have become an essential part of the fabric of our communities. The number of registered tax-exempt public charity nonprofits has grown to over one million, increasing by 59 percent from 1999 to 2009. A little over one-third of those (approximately 368,000 with more than $25,000 in gross receipts) filed a tax form 990 with the IRS. These public charities reported over $1.4 trillion in total revenues and $2.5 trillion in total assets in 2009, according to the National Center for Charitable Statistics (NCCS).

According to the IRS Business Master File for March 2012, there were about 18,000 public charities in Michigan alone that filed a tax form 990 (those with revenue greater than $50,000). These charities had revenue of approximately $43 billion and assets of $67 billion.

Though nonprofits as a whole control large financial resources, many are operating on razor-thin margins. According to the Nonprofit Finance Fund's 2012 State of the Sector Survey, 56 percent of the 4,607 nonprofit respondents surveyed in 2011 were operating at deficit or breakeven levels. In addition, nine percent had no cash on hand, 16 percent had only one month of cash and 32 percent had two to three months. The conclusion of the Survey was that the,

"Nonprofit Finance Fund's fourth annual survey of nonprofits nationwide reveals that rising service demand is overwhelming a sector still coping with a brittle economy and a barrage of funding cuts. While there are hints that some organizations may have navigated through the worst of the recession, the ever-increasing need for services suggests that our communities have not. The 4,607 respondents tell a story of a sector still stretched thin, with organizations feeling distant from their funders and boards, and staff facing more work with less money and fewer benefits to take home. This is a wake-up call to funders, government, board members, advocates and all of us who care about the critical work nonprofits do to build a just and vibrant society. The recession may be over, but the nonprofit financial crisis is not."

Merger as One Tool to Increase Operating Efficiency

Many people have recommended for many years that nonprofits consider merging as one method to improve their organizational effectiveness. Some of the more common reasons for merger strategies are as follows:

1) Increasing the quality of programming and producing better outcomes
2) Gaining vertical or horizontal integration -- providing a better continuum of service to clients; being able to address more complex issues; gaining efficiencies and economies of scale
3) Expanding the geographic or demographic reach of the organization; responding to the increased demand for services
4) Growing more quickly via merger instead of building internally
5) Reaching critical mass and being more visible in the community
6) Selecting the best board members from both organizations to strengthen the organization, improve fundraising capability and leadership, access key relationships, and gain more expertise
7) Competing more effectively for grant funding and major donors (with a larger organization)
8) Reducing the cost of duplicate administrative operations (e.g., finance, human resources, accreditation, fundraising, IT, etc.)
9) Reducing facilities costs
10) Obtaining and affording high-quality talented staff and training programs
11) Building on the best attributes of both organizations while pruning the weakest attributes
12) Diversifying and expanding the sources of revenue to reduce the risk of being dependent on only one or two major sources of funding, some of which fluctuate widely and regularly pay late.

If there are many good reasons for nonprofit mergers and acquisitions, why does it seem as though there is a lot of discussion in the nonprofit world only about the softer approaches to these issues: collaborations, alliances, joint ventures, partnerships, resource sharing and joint programming? Many obvious questions come up, such as:

These questions will be answered in our next article in this series entitled "Who Cares About Nonprofit Finances?"