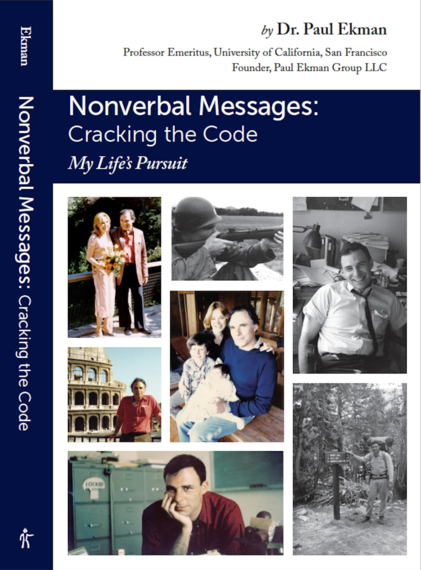 "What motivated me to spend fifty years investigating facial expressions, gestures, emotion and lies? Why these topics, which had been abandoned as fruitless by the academic establishment?... In much of my life I have been a bit oppositional, some would say rebellious, so I am not surprised that I gravitated towards topics scorned by academia as the stamping grounds of charlatans and fools. My eyes told me they were wrong. I delighted in the opportunity to prove that. But from where did my oppositional nature come, and the motivation that drove me unmercifully? ... After a year of moving from one army base to another, changing schools three times that first year, [my family and I] settled for the next three years in Pasadena, California, where a radical change in my approach to life was forced upon me. After a happy first two months attending John Marshall Junior High School, everything abruptly exploded. The band teacher (I played the clarinet, badly) asked each student to name the church he or she attended. When I said I was Jewish the teacher asked me to come to the front of the class and bend over so my fellow students could see my horns. I didn't know if I had them, but the looks of disappointment in my classmates' faces let me know that if I did, the horns must have been too small to be visible. The boy I regarded as my closest friend complained after class that I had ruined his reputation for having befriended a Christ killer. Those were the last words he spoke to me. They were the last words any child spoke to me for the next two and a half years... Between the ages of nine and twelve, I had no opportunity for friendship. Slowly I became resentful towards my fellow students, resentful towards my teachers. Resentful! This is where I trace the origin of my oppositional, somewhat rebellious nature as an adolescent and as an adult. I was forced to become self-sufficient. I became my only friend. I began to talk to myself, encouraging myself in whatever I did, a habit I continue to this day, although now I do have friends."

Get your copy of Nonverbal Messages: Cracking the Code here.

Dr. Paul Ekman is a well-known psychologist and co-discoverer of micro expressions. He was named one of the 100 most influential people in the world by TIME magazine in 2009. He has worked with many government agencies, domestic and abroad. Dr. Ekman has compiled over 40 years of his research to create comprehensive training tools to read the hidden emotions of those around you. To learn more, please visit: www.paulekman.com.