"Some things in life need to be mysterious," Peggy Noonan explained. Americans needed the Noon's guidance. You see, the unenlightened herd needs political elites to explain complicated and seemingly contradictory lessons in morality. Why is it okay if America tortures? Didn't we sign that Geneva Conventions thingy?

Nevermind. Aunt Peggy is here to explain away the bad thoughts. "Sometimes you need to just keep walking." Indeed.

Roger Cohen agrees, and as usual, wrote a succinct summation that would have made Hemingway blush at his own rambling oeuvre: "In a thicket of words lies plausible deniability when the time for horror's accounting arrives." Cohen translates a few paragraphs down: "I'm wary of the clamor for retribution." Oh.

Senate Democratic leaders, teaming with the Obama White House, rushed to support the study of Noonology, and said they would resist efforts to investigate the harsh interrogation methods used on detainees. (Emphasis mine).

Mr. Reid, who repeatedly denounced the use of harsh interrogation techniques when Mr. Bush was president, suggested that naming a special panel would signal an intent to exact "retribution" and he sought to paper over the disagreement with members of his own caucus, like Senator Patrick J. Leahy of Vermont, who want a commission.

Apparently, upholding the law is now a fringe issue. Those on the "hard left " want accountability, and the serious beltway "journalists" want to "keep walking" away from "retribution" so as to maintain life's sweet "mystery."

Sweeping away the government's crimes is no longer the behavior of apologist sycophants. It's called Noonology, and now you can try it at home!

Got some unpaid parking tickets? Not a problem. You march right into your local courthouse, look that mean ole' judge right in his beady eyes, and say, "I'm not paying these tickets! I'm moving forward!"

Just lost your job? Never fear! Go rob a convenient store. When the cops try to arrest you, explain they're shattering life's sweet mysteries by prosecuting you under the law.

Neighbor playing loud music? Shoot him!** If society, or "the man," starts harassing you about murdering a human being, explain that retribution is pointless, and by trying to hold you accountable for your deeds, the cops are tearing at society's very fabric.

: the study of juvenile, pathetically sycophantic individuals, who think the law was designed only for poor people, and it doesn't apply to a corrupt oligarchy. 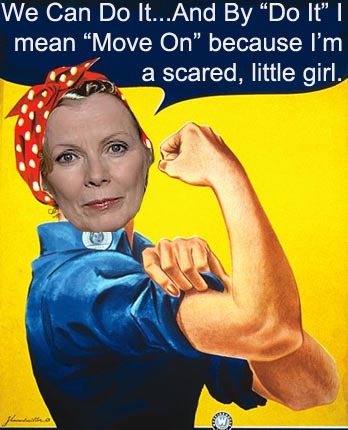 ** I'm kidding. You'll totally go to jail because you don't work for the government and so the law applies to you.