Twitter has been flooded with reports that Noor Group, which had been the last Internet service provider in Egypt still offering access to the Internet, has been taken offline.

Renesys, which provides "Internet intelligence" and data on Internet operations, confirms that it has observed Noor Group down as of 20:46 UTC.

Renesys wrote, "As of approximately 20:46 UTC, four hours after this blog was first published, Noor started disappearing from the Internet. They are completely unavailable at present."

As we reported earlier today, Noor Group, which has around 8% market share, had been the only Internet provider in the country still offering access to the Internet. Egypt's other ISPs, such as Etisalat Misr, Link Egypt, Telecom Egypt, and Raya, shut off the country's connection to the Internet last week (See a visualization of the country's web blackout here).

There has been speculation that Noor had remained online because of the high-profile, economically-relevant customers that it services. Noor's clients include institutions that are crucial to the country's financial industry, including the Egyptian stock exchange, Commercial International Bank of Egypt, and the National Bank of Egypt.

In a blog post on Friday, Renesys observed Noor Group "still has 83 out of 83 live routes to its Egyptian customers, with inbound transit from Telecom Italia as usual."

One Twitter user suggested that Noor may be discriminating in the way it has set about shutting off Internet access--@Invisiblella tweeted, "noor.net shut all EXCEPT NTG, the National Technology Group providing IT processing to the aviation, banking and financial sectors."--though this is unconfirmed.

Renesys reports that Noor has not made any exceptions: "Every prefix originating or transiting Noor is currently unavailable. NTG is no exception," the company told The Huffington Post.

The president and CEO of the Internet Society, a nonprofit organization that aims to develop Internet standards and policy, condemned Egypt's Internet shutdown in a statement. "The Internet Society considers this recent action by the Egyptian government to block Internet traffic to be an inappropriate response to a political crisis," wrote Internet Society chief Lynn St. Amour. "It is a very serious decision for a government to block all Internet access in its country, and a serious intrusion into its citizens’ basic rights to communicate. If the blockage continues, it will have a very detrimental impact on Egypt’s economy and society. Ultimately, the Egyptian people and nation are the ones that will suffer, while the rest of the world will be worse off with the loss of Egyptian voices on the net."

UPDATE:An Internet user in Cairo reports that Noor DSL was inaccessible earlier today. When contacted by the user, Noor's tech support said the network was experiencing "technical problems" that would take several hours to resolve.

See how you can help Egypt get back online here. Email us tips at egypt@huffingtonpost.com.

LOOK: A chart of the availability of Noor Group's networks via Renesys 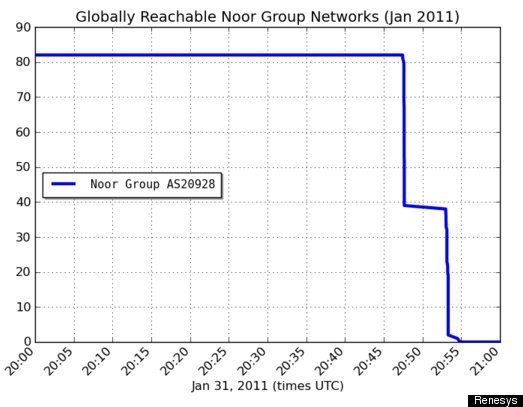