Drivers worried about those pesky red light cameras may soon be able to put their mind at ease, while keeping the police off their backs and out of their wallets.

Dandrow heralds his invention, which consists of a flash detector and two xenon flashes embedded in the license plate frame, as a potential end to camera tickets.

It's a simple concept that utilizes sophisticated technology: The optical trigger detects the flash of the camera as it surreptitiously snaps the license plates of cars caught running a red light. The trigger in turn sets off the xenon flashes, overexposing the picture of the plate.

Cameras have been a controversial but continuous addition to intersections across the country, with some experts arguing they save lives, and others saying they pose an unnecessary infringement on personal privacy that serves primarily to line the pockets of local precincts.

"Red-light cameras are a money-making enterprise for the cities that deploy them," Gary Biller, the president of the National Motorists Association, wrote for the U.S.News & World Report. "Proponents claim that cameras improve intersection safety by deterring red-light running and by ticketing rolling-right-turn-on-red drivers. Yet numerous studies, including an investigative report by the Washington Post, have shown accident rates increasing by double-digit percentages after the introduction of cameras."

Overall use of cameras has gone up overall, however. According to the Daily Beast, there were red light cameras in 25 communities in 2000. Today, they are in more than 500 communities.

Dandrow told Autoblog that he started working on his noPhoto device in college after hearing his family complain about all the tickets they were picking up.

"I simply love messing around with this kind of thing," he told The Huffington Post in an email. "I love cars, I'm an amateur photographer, and I'm an electronics hobbyist. When I heard about my family in Washington, D.C. constantly getting tickets, I worked on the device for fun until I realized that I potentially had something."

Citing Constitutional concerns among others, Dandrow told HuffPost that "noPhoto is not meant to enable irresponsible drivers to blow through intersections with impunity - rather, the hope is that by installing a noPhoto, drivers will drive as they did before the dangerous red light cameras were installed."

While Dandrow's concept isn't new -- optical flashes already exist and are readily available -- Dandrow has been able to make the device work up to 150 feet away in both direct sunlight and darkness, Wired reports. The invention also has proprietary filtering circuitry and a microprocessor to cut down on false alerts by more than 90 percent.

The devices, which Dandrow expects to sell for $350 each, are still in the prototype stage. He's using Indiegogo to try to raise $80,000 in order to get the device certified by Underwriter's Laboratories. 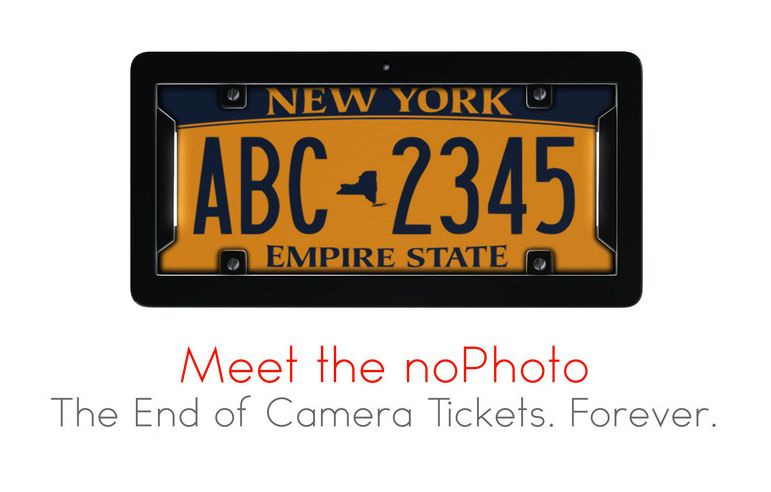