A Connecticut woman recently received a shock when she found a live black widow spider tucked amongst the organic grapes she'd recently purchased from Whole Foods. 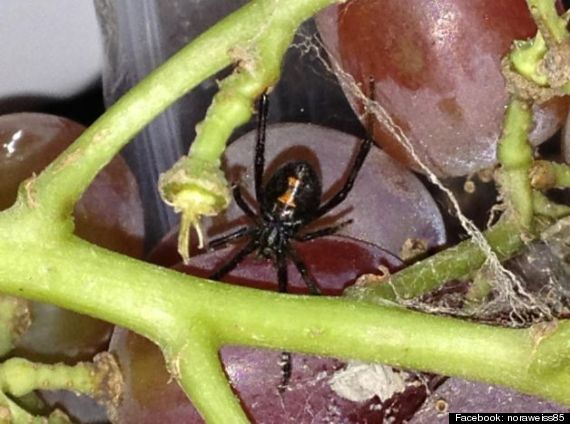 Nora Weiss posted a picture of the spider, its telltale red markings clearly visible, with the following message:

"Attention all Fairfield Whole Foods Customers!!!! I just found a black widow spider in my Sunview Organic Table Grapes bag!!!! If you just bought or will be buying these grapes or any other produce from them, carefully inspect and wash them with rubber gloves!!!! Ahhhhhh!!!! Totally freaked me out!"

Greenwich Time spoke with Whole Foods representative Michael Sinatra who said that because the spider was small -- about the size of a grape -- it was missed. "We certainly don't want it to happen," Sinatra said. "The safety of our shoppers is incredibly important. And we also offered the customer a refund."

Weiss' tale sounds hair-raising, but the phenomenon of spiders and other insects making their way into grocery stores isn't so uncommon. Back in August, The Huffington Post wrote about another incident involving a spider found inside a bag of grapes.

In researching the story, we found evidence of several reports involving black widow spiders stowed away in supermarket grapes that ranged from New Zealand and Massachusetts. In fact, Fresno State plant science professor Dr. Andrew Lawson told Fresno State News in 2009 that the “movement of any black widow from the vineyard to the market place presents an immediate concern to the table grape industry."