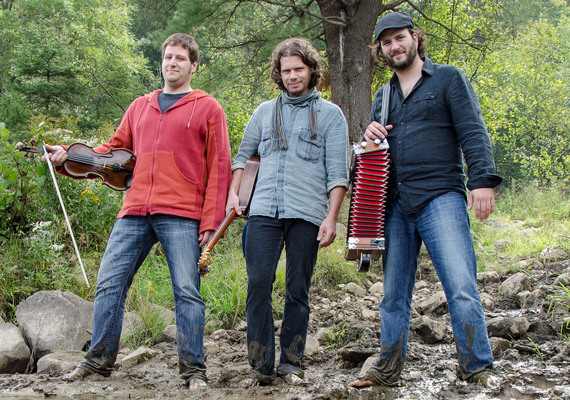 Here's a rundown of recent Canadian releases, many of which I picked up at the Folk Alliance conference back in February. Let's begin with a big event in Canadian folk reissues: Borealis's box set Stan Rogers: The Collection. Rogers, who was born in 1949 and died tragically in 1983 in the fire aboard Air Canada flight 797, is one of the most important Canadian songwriters of the twentieth century, and also a significant interpreter of traditional folk songs. If you've heard such folksongs as "Rolling Down to Old Maui" and "The Maid on the Shore," chances are you've heard Stan's influence. As for his songwriting, he's been called Canada's Woody Guthrie, and the comparison isn't far off; an astonishing number of his songs have become standards on the folk scene. The box set includes all his adult-oriented studio albums, plus the 1979 live set Between the Breaks. (Not included are his kids/family album, For the Family, and the various posthumous compilations and live sets.) This means almost all of his best known pieces are here, including the folksongs I mentioned above, and the classic original songs "The Mary Ellen Carter," "Barrett's Privateers," "The Flowers of Bermuda," "The Jeannie C.," "White Squall," "Northwest Passage," "The Field Behind the Plow," "Fogarty's Cove," and "Giant," to name only a few. Several of these could be mistaken for traditional folksongs, and all of them reflect Rogers's concern for working-class rural Canadians, especially sailors, fishermen, and farmers. All of them are being sung at festivals, coffeehouses and song circles all over North America, over thirty years after Rogers's death; surely, this is the greatest tribute a songwriter can receive. The CDs were fully remastered for CD in the 2010s, and the sound is rich and full, doing justice to Rogers's famously resonant baritone. Also included in the set is a CD of live recordings on which Rogers sings other peoples' songs, and a DVD of the excellent documentary One Warm Line, newly enhanced with rare video footage of Rogers's band in its prime. Whether you're new to Rogers's work and want to jump-start your collection, or you want to update your library with the best sound around, this set fits the bill! Here's a video featuring one of Rogers's best known songs:

The release of Laura Smith's latest CD, Everything Is Moving, is another big event in Canadian music; since her last album 16 years ago, she went through an ordeal of debilitating accidents and a resulting dependence on pain medication that caused a long career hiatus. Like Stan Rogers, Smith is an acclaimed songwriter and singer who also performs traditional folksongs. Like Rogers, she's a native Ontarian with roots in the Maritimes, leading to a distinctly Anglo-Celtic songwriting style. And like Rogers, she hires producer Paul Mills to make her albums, resulting in a clean, modern folk sound. This disc contains some fine songwriting, in which Smith's recent travails are couched in evocative metaphors:

I built a boat, I built her for one
I didn't find any flaws until long after I was done
Everything was fine until I lost sight of shore, then I knew
I didn't want to be in a boat for one anymore

In addition to her own songs, the disc contains two traditional folksongs ("Lonely Waterloo" and "The Gartan Mother's Lullaby"), and songs from contemporary folk and Celtic songwriters Alex Sinclair, Kim Dunn, and Micheál Ó hÓgáin. The songs speak of discomfort, of searching, of loneliness, and of death. Yet Smith's lived-in voice and Mills's production are strangely comforting too, making Everything is Moving very moving indeed. 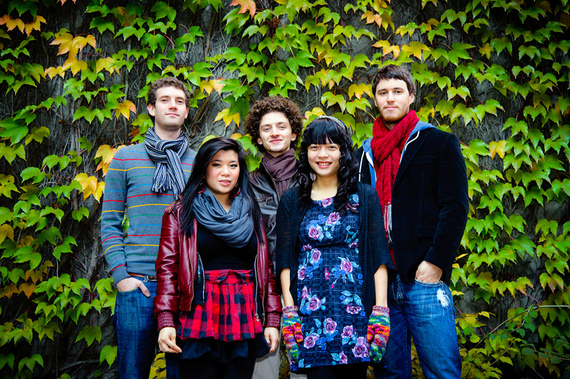 The Bombadils is a band made up of members from the four corners of Canada, who met while studying jazz and classical music at McGill University in Montreal. The music on their CD, Fill Your Boots, is rooted in Québécois, Irish, and Appalachian music, but the jazz and classical influences show through as well. The resulting songs and tunes, played on fiddles, flutes, guitar, mandolin, bass, and percussion, feature syncopated rhythms, unusual chord choices, and more bent swing notes than you'd expect in straight-ahead folk music. It's a sinuous sound that reminds me a little of the 70s Québec band Barde. Material includes traditional songs like "Lark in the Morning" and "Fair and Tender Ladies," along with quirky originals such as "Even the Sparrow Finds a Home" and "Peter's Lament for the Death of the Duck," both by Sarah Frank (see the video below). As something of an expert on songs about Noah's Ark, I was impressed with "Noah's Wine," an adaptation of a G.K. Chesterton Poem with a humorous take on the bible story. Both upbeat and contemplative instrumentals round out the selections. It's an impressive and exuberant debut which reveals unusual musical depth and rewards repeated listening. Also, the CD sleeve folds out into a pop-up diorama. Who doesn't love that?

The third CD from De Temps Antan, Ce Monde Ici-Bas, features band members Éric Beaudry (guitar, bouzouki, feet, vocals), André Brunet (fiddle, feet, vocals), and Pierre-Luc Dupuis (accordion, harmonica, Jew's harp, feet, vocal), singing and playing their way through a set of traditional and original Québec music. Gutsy jigs and reels, stately waltzes, and French-language call-and-response songs are underpinned by "podorythmie," or rhythmic foot-tapping, which is Québec folk's preferred form of percussion. There's plenty of satisfying complexity to the arrangements, but it's all subtly done; listen to the fiddle gently feeling out drones and harmonies under the singing of "Jolie et Maquillée" (incidentally an unusual version of "Le Petit Cordonnier," a venerable French folksong), the unconventional chord progressions underlying "Un Homme Sans Pareil," or the almost dissonant modulation on "L'America," for a sense of the original ideas and skillful execution they deploy at their best moments. The great thing is, even if you don't notice those touches at all, it's a brisk, fun CD by a masterful trio of Canadian musicians. As a longtime admirer of La Bottine Souriante, I found a lot to love here; all three members of this power-trio did stints in La Bottine. Here's a video of the album's opener!

I'll also quickly mention Nord, the CD by Maja and David. David Boulanger is a French Canadian fiddler and foot-tapper also known as a member of La Bottine Souriante (as well as La Part du Quêteux), and Maja Jacobsen is a Danish fiddler who plays regular and Hardanger fiddles, as well as a traditional folksinger. This is a real feast for fiddle fans. Their two traditions blend sweetly and seamlessly on Nord, showing that springy Scandinavian dances can segue beautifully into raucous Québécois reels, and that drone-rich Danish airs work beautifully with their Canadian cousins. One Danish ballad shows off Maja's lovely singing...I hope there will be more of that on their next CD. In the meantime, here's one of their Folk Alliance sets!