Monday night at the sparkling Beverly Wilshire Hotel proved to be a love-fest.

Hollywood's best and brightest came out to celebrate television legend Norman Lear and actor Alec Baldwin for the 30th anniversary of People For The American Way, a progressive advocacy group founded by Lear ("All in the Family," "Maude," "The Jeffersons") in 1981, whose stated mission is to make "the promise of America real for every American."

The evening kicked off with a red carpet and cocktails. California Governor Jerry Brown even made a quick appearance, and once dinner was called (signaled by soft bells rung by waiters), guests were seated at round tables in the ballroom and greeted by "Glee" favorite Jane Lynch. Lynch spoke of her marriage to her wife, Lara Embry, in 2010 in Massachusetts. On equality for all, she said to the room, "You have been fighting for me, and I thank you. This is a topic that is particularly important to me. Last time I checked, same-sex marriage has not ruined anyone else's marriage."

OWN's Lisa Ling, musician will.i.am, Jon Stewart (via satellite) and actor Ed Begley Jr. also all spoke, but it was Begley who introduced honoree Alec Baldwin by proclaiming, "No one infuriates the right wing more than this man ... except Norman Lear."

Baldwin took the stage and revealed to the room the secret of success: "It has taken me 30 years to learn that it's who your co-star is. And I'm a genius ... I piggybacked onto the great Norman Lear." He recalled how he became involved with People For the American Way when he met Lear 30 years earlier at a dinner. "It was like going to a party and meeting Steinbrenner and being asked to try out for the Yankees." Baldwin expressed gratitude for being honored as a long-time board member with PFTAW and referred to Lear as his "great, great idol."

Baldwin looked to Lear as a mentor after his father died and has worked tirelessly for the organization. He mused, "I'm a middle aged, well-to-do white man. I should be playing golf and watching Occupy Wall Street on TV and wondering what all the fuss is about." But instead he has, in his own words, "taken a lot of crap from people" for his positions. He closed with a smile and a summary: "The work I've done with Norman has practically ruined my career. But it has made me a better person and a better thinker."

Later in the evening, Carl and Rob Reiner spoke about their love and affection for Norman Lear, who was sitting just a table away. Carl Reiner recalled a party at which Lear served cake with his bare hands. Rob Reiner revealed to the audience that his father, Carl, had undergone a root canal earlier that day but had insisted on being there to celebrate Lear. "Did Alec Baldwin have a root canal today? No," he joked.

Director J.J. Abrams introduced Lear at the close of the evening and said, "I knew I'd never be asked to join a sports team and I could never throw a ball as a kid. So my role model was Norman Lear. I felt it then and I feel it now: When I grow up, I want to be like Norman Lear."

The man of the evening, Norman Lear, 89, walked up to the stage and laughed that these days he gets an applause just for walking across a room. He thanked J.J. Abrams and asked, "May I call you J?"

Lear spoke at length about what People For The American Way has meant to him, why he feels so strongly about the separation between church and state, and then he pulled out a letter he received years before from Pat Robertson, who told him, among other things, "Your arms are too short to box with God." But more than anything, Lear expressed his deep gratitude and appreciation for his life and those in it.

The evening raised over a million and a half dollars for People For The American Way. 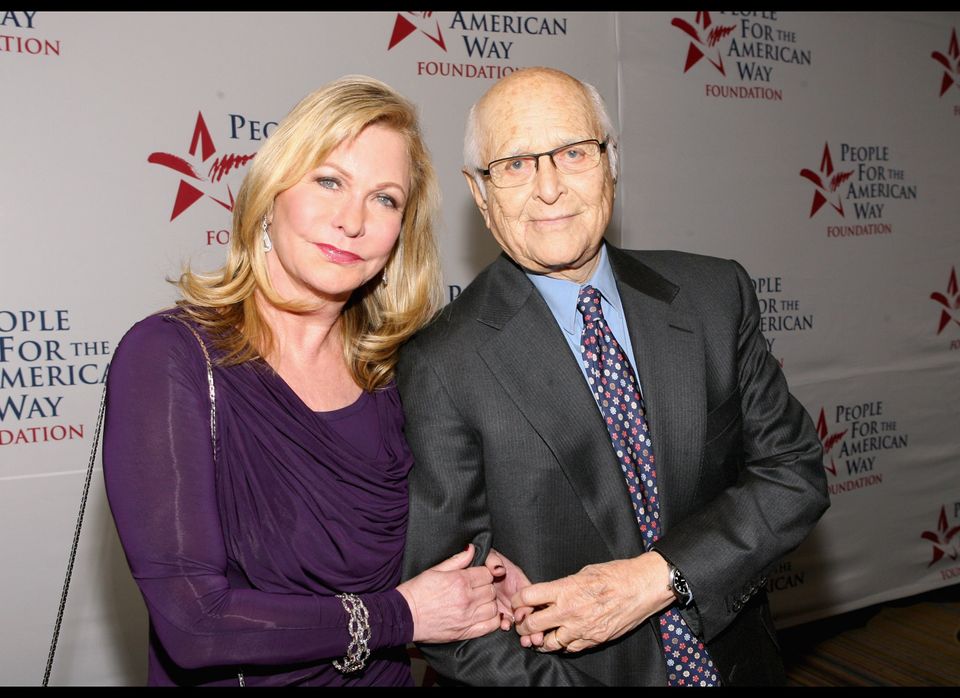 1 / 18
Lyn Lear and Norman Lear attend the 30th anniversary of People for the American Way Foundation, December 5, 2011, at the Beverly Wilshire Hotel.
Wireimage