Norman Reedus isn't letting the chance that Daryl Dixon might be dead stop him from taking his 'cycle on the open road and letting 'er rip.

Reedus, who plays the enormously popular Daryl on AMC's The Walking Dead, launches his own unscripted AMC show, The Ride With Norman Reedus, Sunday at 10 p.m. ET. 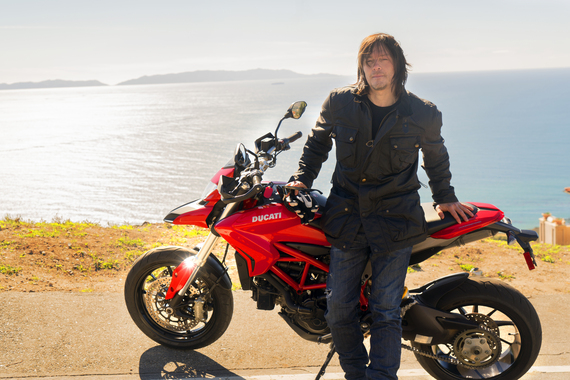 It follows the real-life motorcycle enthusiast on a series of rides around particularly choice parts of America.

The series leads up to the fall return of The Walking Dead, when we will presumably learn whether Daryl was the unlucky good guy whose skull has been smashed into jelly by the villainous Negan.

The Ride With Norman Reedus doesn't deal with that kind of negativity, as they say in the pop psychology game. It's an upbeat production celebrating the adventurous side of motorcycle culture as Reedus and a series of guests roar through some of the prettiest sights in America. 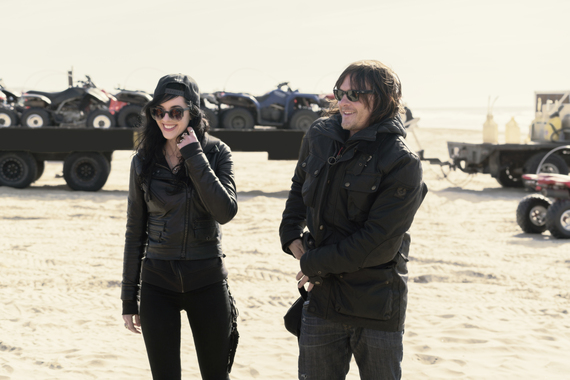 The first episode takes Reedus and his jewelry-designing pal Imogen (above) on a ride from Los Angeles up the Pacific Coast Highway, the famous Route 101.

It's a stunning ride, and while an hour only allows time to sample a small part of its fascination, you don't have to be a biker to understand why cruising along in the open air is a great way to maximize the sensory experience.

Despite that kind of lovely travel element, however, The Ride remains targeted most directly at motorcycle lovers.

Reedus's pit stops almost all involve bikes, from the BMW that he borrows for the trip to a Zero bike that runs on electricity and makes no sound.

Verdict here: Reedus says that while he likes the Zero a lot, he's still old-school enough to prefer the "rumble" of traditional bikes.

His final stop takes him to the Re-Cycle Garage in Santa Cruz, where he guests on a podcast called Motorcycle Misfits. The on-air team, as the name suggests, is a bunch of outsiders drawn together by a common affection for bikes.

Among other things, they ask Reedus what bike he'd suggest for the Zombie Apocalypse. He prefaces his answer by saying his choice probably won't please everyone in the group.

That moment is one of only three or four that references Reedus's Walking Dead celebrity. He doesn't spend much time himself talking about it, focusing more on his love of bikes and how biker culture was his route to finding himself when he moved to L.A. almost 20 years ago.

If nothing else, The Ride With Norman Reedus presents a different California biker world than we've often seen in the movies and on television. From the 1954 movie The Wild One to the recent TV show Sons of Anarchy, California bikers have often been portrayed as a lawless, reckless bunch. 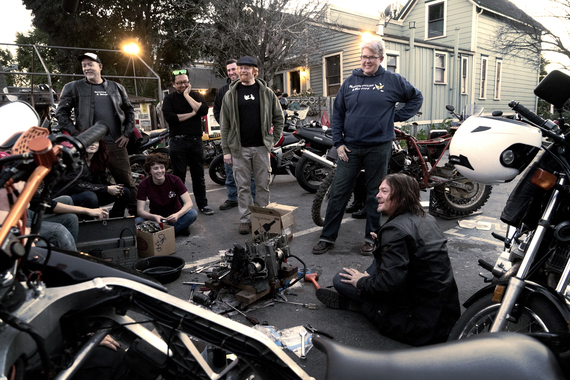 Reedus fully buys the notion of bikers as outsiders, but everyone we meet here is law-abiding and a solid citizen. The wildest it gets is when famous bike designer Roland Sands stands on top of the seat while cruising down a freeway at maybe 50 miles an hour.

Reedus slides into the host role well, with only a few passages where the banter feels stiff. In general, he comes off less as a star than that one guy in a thousand who hit the number and can't fully believe it landed him a gig as cool as this.

Sure, it's something of a vanity project, in the sense that it wouldn't exist without Reedus's fame from The Walking Dead and AMC's interest in giving more airtime to one of that show's best-known characters.

But that doesn't mean it can't still achieve its purpose, which is to take fans on a different ride.

Think of it as if it were, say, Cooking With Carol, a hypothetical spinoff with a different Walking Dead character. It would still be cashing in on The Walking Dead, but if the recipes were interesting, so what?

Besides, what better way to defy Negan?