It's time to redraw the map of the world during the reign of the dinosaurs, two scientists say.

Picture the U.S. West Coast as a tortured tectonic boundary, similar to Australia and Southeast Asia today. Erase the giant subduction zone researchers have long nestled against western North America. Drop a vast archipelago into the ancient Panthalassa Ocean, usually drawn as an empty void, the kind on which medieval mapmakers would have depicted fantastical beasts.

"Now it fits together," said Karin Sigloch, a seismologist at Ludwig-Maximilians-University in Munich, and lead study author. "We've come up with a pretty different solution that I think will hold up."

With a spectacularly clear look at the remnants of ancient subduction zones under North America, Sigloch and her colleague Mitch Mihalynuk have revised 200 million years of geologic history. The results of their study are published today (April 3) in the journal Nature. [Have There Always Been Continents?]

The story begins 200 million years ago, just before the Atlantic Ocean basin first opened. North America was crammed into the Pangaea supercontinent and the vast Panthalassa Ocean covered the rest of the planet. 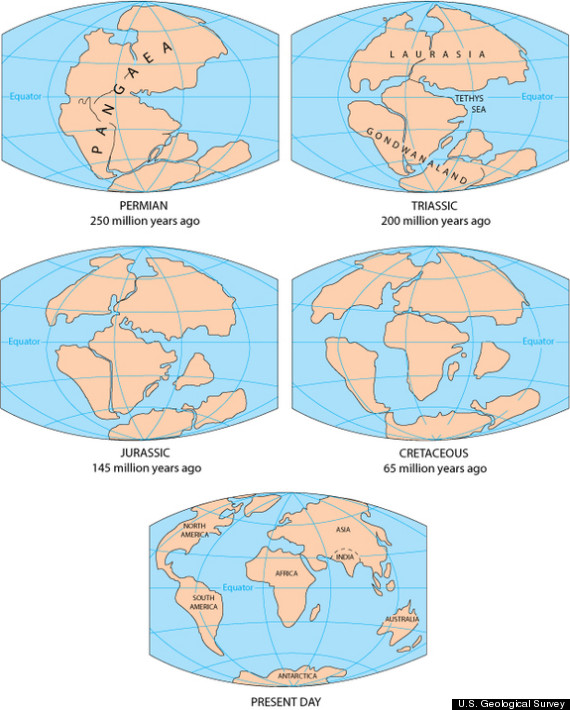 The breakup of the Pangaea supercontinent.

Panthalassa's ocean floor has almost completely disappeared under North America as Earth's tectonic plates have shifted, so its history is somewhat cryptic. A few geologic clues led scientists to the prevailing model, contested by the new study. The puzzle pieces include the few remaining bits of Panthalassic ocean floor, rocks scattered along western North America, and remnants of the old oceanic crust seen under the continent, where the plate disappeared into the mantle, the layer of Earth beneath the crust.

After North America started shifting to the west 185 million years ago, away from Africa and Europe, the prevailing model placed a subduction zone along the West Coast that consumed Panthalassa's huge oceanic tectonic plate, the Farallon plate. Imagine a setting like today's Andes in South America. Like a giant conveyor belt, the subduction zone delivered exotic terranes that built out the western continent.

But for some scientists, the puzzle pieces just didn't fit this picture. Sigloch and Mihalynuk think they know why.

Sigloch looked deep into the mantle, at the remnants of oceanic crust that remain beneath North America. In a subduction zone, two of Earth's tectonic plates collide and one slides into the mantle. The plates are colder and denser than the surrounding mantle rock. Seismic waves change their speed as they pass through the plates, revealing their location. No one had seen these old pieces of crust in this detail before because it requires powerful computers and very dense arrays of seismic monitoring equipment, both of which came about in the last decade.

Sigloch discovered a vertical pile of oceanic crust segments stacked on top of one another like bricks. The massive wall runs from northwest Canada to Central America, and is 250 to 375 miles wide (400 to 600 kilometers) and extends from between 500 to 1,200 miles (800 to 2,000 km) beneath the surface.

These former slabs, as geologists call subducted crust, fix the position of Panthalassa's ancient subduction zones in time and space, the study shows. The slabs sunk vertically about 0.4 inches (1 centimeter) per year and have not shifted in space. Because geologists know the travels of North America in detail, thanks to magnetic stripes in the Atlantic Ocean, the researchers can pull back the continent and compare it to the position of subducted crust. 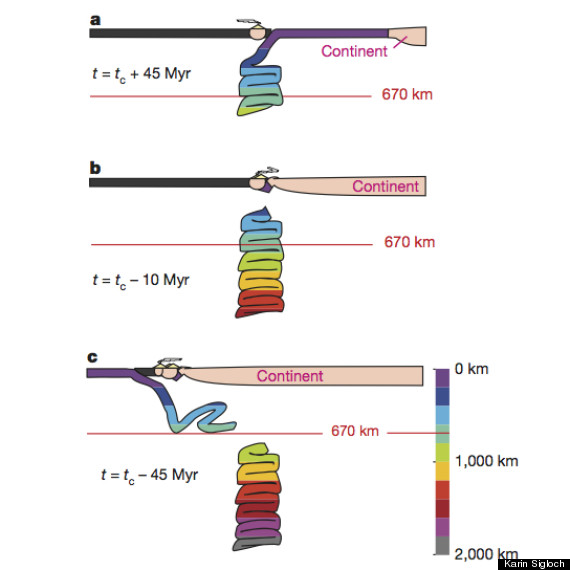 A cartoon illustrating how a vertical slab wall could form under North America after Pangaea.

"What this does is provide us with a time machine. The slabs are telling us the sites of past ocean trenches and the locality of island arcs, which are the building blocks of continents," said Mihalynuk, a geologist with the British Columbia Geological Survey in Canada.

What the mantle evidence shows is that as Pangaea broke up, out in the Panthalassa Ocean, a vast archipelago sat far offshore of North America. It was shaped like an arrowhead, 6,200 miles (10,000 km) long, with its tip pointing to the proto-Pacific Northwest. Two ocean basins sat between the archipelago and North America, called the Angayucham and the Mezcalera. On the other side of the archipelago, further to the west, was the Farallon plate. 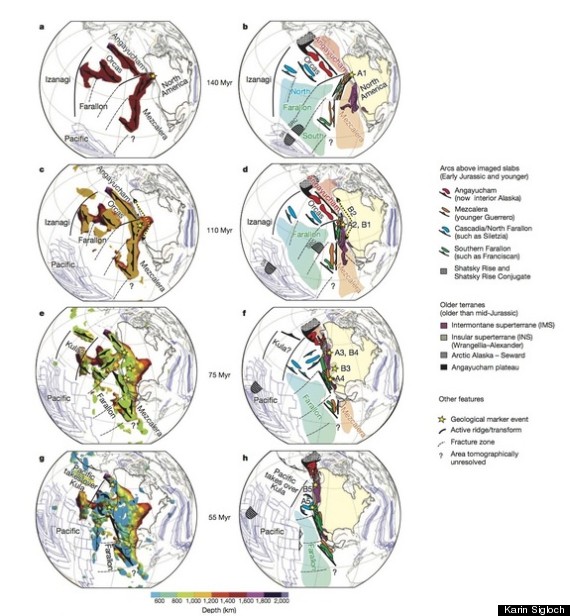 "It makes perfect sense," said Robert Hildebrand, a geologist at the University of California, Davis, who was not involved in the study. "If there was eastward subduction, as most people would suggest, it would leave a bread crumb trail strewn out across the mantle. That's not what you see."

As North America plowed westward, with its margin sinking the two plates, it rammed into the arrow point about 150 million years ago. This impact was responsible for raising the initial Rocky Mountains, Mihalynuk said.

Further west of the archipelago, the Farallon ocean plate was descending into its own subduction zone, the mantle evidence indicates.

In fact, the entire western Panthalassic was more like the Southwest Pacific, where northeast Australia collides with islands, microcontinents disappear into the Earth, and there are flip-flopping subduction zones, the study authors said.

"The ocean basin was not a vast abyssal plain," Mihalynuk told OurAmazingPlanet. "The situation is much more like the Southwest Pacific than offshore South America." [World's Biggest Oceans and Seas]

Over time, collisions with the different subduction zones smeared exotic terranes along the continent's western margin, a rock record that has long hinted at North America's violent tectonic history. The history revealed by the mantle slabs helps explain some baffling geology, such as rocks carried 1,200 miles (2,000 km) from Mexico to Canada. "I would say that this model comes very close to fitting the geology," Hildebrand said. 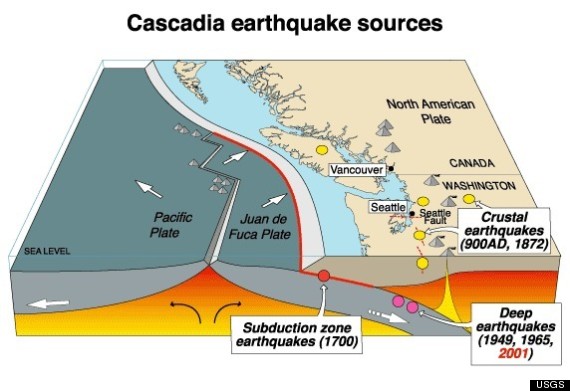 A cross-section of a portion of the Cascadia subduction zone.

Sigloch also found another, more westerly slab wall connected to the Cascadia trench off Washington and Oregon, into which the last remnant of the Farallon plate, now called the Juan de Fuca, is subducting.

Mihalynuk said the new model will make waves, as it overturns 40 years of accepted wisdom about the evolution of western North America. "It will take a while to turn people around. That intellectual ship has a lot of inertia," he said. But for Mihalynuk, "this is one of those eureka moments."