Every resort, every mountain and every hill, whether big or small, has at least one great groomed run.

As with mogul runs, this list is totally random, dependent upon the answers we received on our social media channels. Still, we hope it inspires you, not only to get out and ski or ride and cut up the corduroy, but also to help us build our list by sharing your favorite groomed run in the comments.

With 800+ acres spread across three miles of peaks, Sunday River has a top-notch grooming team. Shout outs for this Maine favorite included American Express, Rogue Angel (both blue runs), Lollapalooza (a green run) and Monday Mourning, a black-to-blue run that is often reserved for race training. 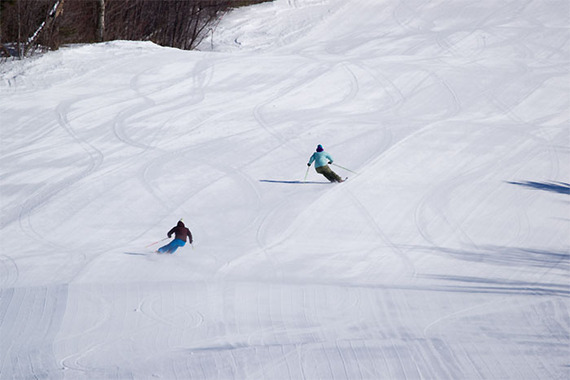 Vermont's Stowe Mountain Resort, came in right behind Sunday River, with one person calling Gondolier "my favorite run to fly down."

Other northeast favorites include the Tote Road and Glancer at Sugarloaf, Vermont and the Wilmington Trail at Whiteface, New York.

Snowshoe: Long Runs in the Mid-Atlantic

Moving south, Shay's Revenge and Cupp Run at Snowshoe Mountain, West Virginia have loyal fans. Two of the longest runs at Snowshoe (about 1500 vertical feet), these runs are off of an advanced lift, so as one person put it "there is no need to dodge beginners or intermediates who think they are ready for black runs." 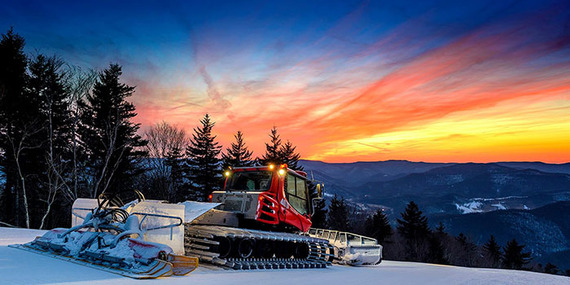 Tremblant's Algonquin was described as "a very easy, wide, long and beautiful green run," unless it's ungroomed following a storm. Then Algonquin becomes an "experts only" run.

At the other end of the spectrum, you find steep and fast Dave Murray, a black diamond run at Whistler that was used for the Men's Downhill at the Vancouver Olympics.

If you're looking for long, immaculately groomed terrain in the northern Rockies, it seems Sun Valley is your place. Two groomed runs were especially popular: Upper and Lower College and Warm Springs.

Upper College is recommended for the views down into Ketchum, while Warm Springs turns out to be a leg-burner at 2.5 miles long and 3000 vertical feet. One person described it as having "the straightest, truest fall line imaginable." 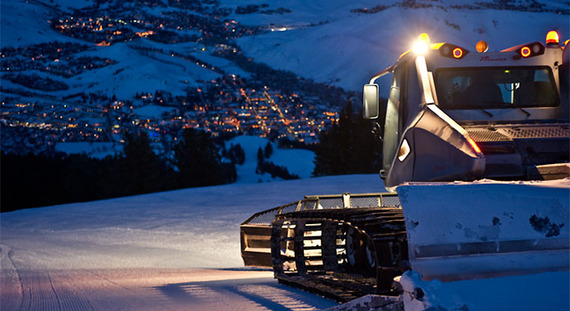 And while Utah didn't get any shoutouts for bumps, two groomed runs in did make our list: Cloud Nine at Canyons and Nabob at Deer Valley.

Tucked into the Southwestern corner of Colorado, you'll find the spectacularly beautiful town of Telluride with huge vistas of the San Juan mountains and beyond. If you like your runs with a view, See Forever is for you. It starts high atop a ridge and winds down the mountain, with alpine eye candy all the way.

Similarly, Gayway at Ski Santa Fe, is said to offer grooming and beautiful views, while many people swear by the high alpine grooming off of the Big Burn lift at Snowmass.

Finally, there was a shout out for Silvertip at Alyeska, Alaska. A blue run from the summit, Silvertip is described as "easy and wide" with breathtaking mountain to ocean views of Turnagain Arm, part of the Cook Inlet. 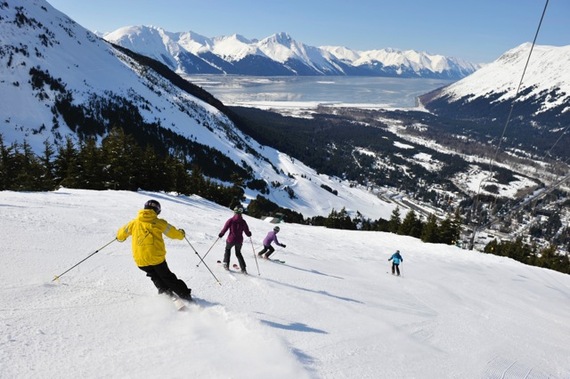 Build the List
While this list is a good start, there are some gaping holes (California, anyone?).

So, if you have suggestions for groomed runs in California, the Pacific Northwest, the Upper Midwest and famous resorts like Jackson Hole, let us know. We'll take suggestions from any resort anywhere in North America!