SAN FRANCISCO -- A coalition of North Beach residents and neighborhood merchants filed a lawsuit last week attempting to block construction of the Central Subway they fear will disrupt the neighborhood for years to come.

Starting later this month, crews will begin digging a very large hole in the commercial heart of the bustling, historically Italian-American neighborhood. Even though the nearest station for the long-planned extension of the T-Third line is half a mile away in Chinatown, transportation officials will close multiple lanes on a stretch of Columbus Avenue between Powell and Union streets in order to create a pathway for the boring machines employed in the project.

SFMTA has publicly stated they expect the disruptions to last for just over a year. But some area residents, calling themselves Save North Beach, worry the construction could cause problems in the neighborhood for up to seven years.

"The idea that any neighborhood would be subject to a construction site for seven years in the heart of its commercial district without actually building something-- we are just a site, with no subway stop-- is anathema to anyone who loves San Francisco," said Save North Beach Founding Director Marc Bruno in a statement.

The group's suit demands a new environmental impact report on the effect the project will have on the neighborhood and financial remuneration from the city to make up for any loss of business individual merchants may encounter from the construction.

A second group, Citizens for Sensible Transit, has also threatened a lawsuit over the North Beach construction, arguing that the project has expended considerably from what was originally approved in 2008.

Authorities aren't letting either lawsuit alter its plans for the subway. "I think we've done a good job of sequencing the project to essentially minimize disruptions to the community," SFMTA Project Manager John Funghi told the San Francisco Examiner.

Funghi argued that the section of Columbus Avenue under construction isn't directly in front of any businesses and should be completed by next November.

The beginning of construction was already delayed due to lack of community outreach earlier this year. Supervisor David Chiu, who represents North Beach, took SFMTA head Ed Reiskin to task for late notification, saying "this nonexistent level of outreach is unacceptable."

The construction will take place right next to Washington Square, a popular tourist destination.

"This is going to be right near Washington Square Park and it's going to be noisy and dirty," North Beach Business Association Vice President Kathleen Dooley told CBS San Francisco. "Who's going to want to come to North Beach for a relaxing afternoon when there’s going to be all this noise and disruption?"

Interestingly, some doubt SFMTA's motives in extracting the machines in North Beach, positing that the plan all along will be to extend the subway all the way up to Washington Square. SF Weekly reports:

Critics of the Central Subway accuse Muni of attempting to have its tunnel and bore it, too. If Muni is really committed to spending upward of $70 million to recover whatever fraction of the machines' $24 million sticker price it can recoup, then it's guilty of bad math, charges transit expert and former Muni engineer Jerry Cauthen. And if Muni is attempting to bore a tunnel and create a large cement footprint that will serve as the future site of the as-yet unfunded proposal to extend the Central Subway to North Beach, it's doing so ahead of conducting necessary environmental procedures. "To me," says Cauthen, "this is an extension they are trying to cover by saying it's an extraction location."

Check out this slideshow of images from SFMTA showing what the Central Subway will look like: 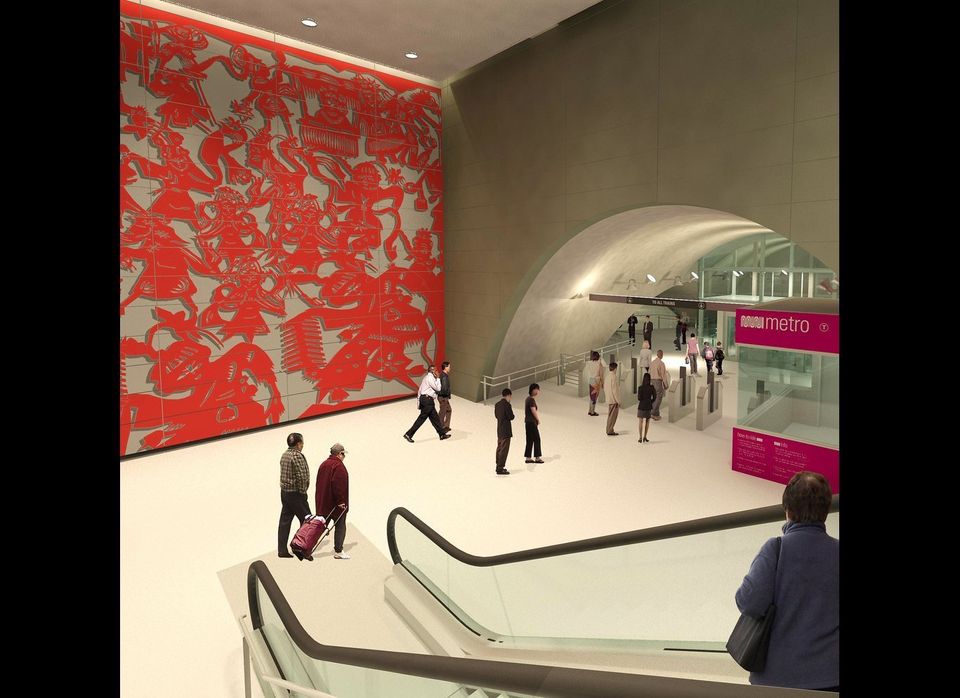