Most people familiar with Warner, who also goes by Bill French, are alarmed by his diatribe against Islam and Muslims. Warner is notorious for his work with his organization the Center for the Study of Political Islam and his book Shariah Law for Non-Muslims. Though the former university professor has no credentials in Islamic studies or related issues, he presents anti-Muslim lectures as scholarly conversations and not what they are: bigotry.

Warner gained notoriety in his opposition to the construction of the Murfreesboro mosque in Tennessee. Since then, he has likened Muslim women who wear headscarves to Ku Klux Klan members donning white hoods. He has criticized Muslim refugees' resettlement in the United States and argued that only Christian refugees should be provided sanctuary. Warner has warned that Muslims can be "friendly" but cannot be a "friend" and has emphasized a "war on Islam" as a solution to the "problem of Islam."

In response to his visit, Moore County residents Paula Irene DeCarlo and Yasemin Kan, organized a grassroots protest against Warner's speech on May 15. A resident of Southern Pines and raised as a Catholic, Paula said she believes that youth can teach adults about diversity and peaceful co-existence. Her son employs music and creativity to defeat messages of hate. Yasemin, a native of Turkey and one of a few Muslim residents in Pinehurst, is dedicated to play her role in challenging the negative stereotypes of Muslims. Paula and Yasemin were joined by residents from other cities in their protest of Warner's speech on May 15th. Some of the protesters represented organizations like Movement to End Racism and Islamophobia and Muslim American Public Affairs Council. Protesters held signs that depicted slogans, "No to Racism, No to Islamophobia" or "To Learn the Truth About Islam, Ask a Muslim." 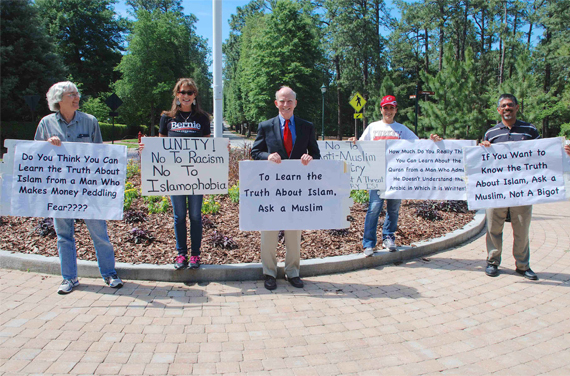 The Pilot, a Pinehurst-based newspaper, published criticism about Warner's visit. In an op-ed on May 14, Michael Pritchett said the decision to host the anti-Muslim activist is in direct opposition to the group's stated values:

"I'm disappointed to see that an organization such as the Moore Republican Women's group is supporting such hate speech despite listing on the front page of their website that one of their core beliefs is 'equal rights, equal justice and equal opportunity for all, regardless of race, creed, sex, age or disability.' How is hosting this controversial speaker holding true to your core Republican values when you are intentionally denigrating an entire group of people for their religious beliefs?"

Moore County Democrats organized a non-partisan discussion on Islamophobia and racism one day after Warner's visit to Pinehurst. Open to all, this event allowed Moore County residents to learn about Islamophobia, its connection to anti-Black racism and other forms of oppression, and offered strategies to defeat this oppression. A similar event against Islamophobia was organized at Congregational Church of Pinehurst on May 22. Congregants of the church, members of Moore County NAACP and grassroots activists offered their perspectives on how to fight Islamophobia. Veteran civil rights leader and North Carolina NAACP legal advisor, Al McSurely, offered perspectives from the HKonJ (Historic Thousands on Jones Street) Movement in building a broad-based movement that challenges racism, inequality, sexism, attacks on workers, Islamophobia, nativism, and other injustices. Launched in 2007, HKonJ has been replicated in many states across the country and led to the rise of the Moral Monday Movement in North Carolina in 2012.

What started as a depressing episode of Warner's visit to North Carolina turned into a rallying call for a movement against all forms of bigotry and oppression. People from different backgrounds and separated in geography, united to fight anti-Muslim bigotry and intertwine this campaign with other social justice movements.