The photograph, which can be found on page 13 of the winter 2012 issue of the organization's Family North Carolina publication, shows a traditionally-dressed bride and groom being targeted by an unseen sniper. It illustrates an article titled "Marriage In Society's Moral Crosshairs," by Jacqueline Schaffer, J.D.

"Protecting traditional marriage by enshrining it in the State Constitution is not only socially beneficial, but it is also necessary to protect religious liberty," Schaffer writes. "When the state sanctions a morally controversial lifestyle such as homosexuality, it will inevitably draw itself into conflict with the religious and moral beliefs of its citizens. Such conflict, however, is not hypothetical, and its outcomes are already well-documented."

The image has sparked the ire of several bloggers. Writes Unicorn Booty's Kevin Farrell: "Did the North Carolina Family Policy Council somehow sleep through that time Congresswoman Gabrielle Giffords was shot in the head after Sarah Palin put her in a rifle's crosshairs? Didn't we come to the societal conclusion that crosshairs and gun imagery?"

Meanwhile, the North Carolina Psychological Association has published what officials have deemed four top reasons why opposing same-sex marriage "is bonkers." Among them: "There is empirical evidence that opposing denial of marriage rights initiatives has beneficial psychological effects," and "Psychologists have colleagues and we have clients for whom this issue is relevant and important, and who appreciate representation. From a social justice perspective, significant benefits accrue to all of us when diverse families are legally and socially sanctioned."

Still, the chances of achieving marriage equality in North Carolina ahead of an amendment on the May 8 primary ballot, which would restrict the state's recognition of marriage to a union between a man and a woman and place more restrictions on civil unions and domestic partnerships, remain uncertain. "From a biblical position, all I can do is state my position: I believe that homosexuality is a sin," Rev. Mark Harris, senior minister at Charlotte's First Baptist Church who was recently elected to a yearlong term as president of the Baptist State Convention of North Carolina, tells the Charlotte Observer. "That said, I don't believe that that position is at the heart of this amendment. If homosexuals choose to maintain a relationship and live together, that's their business. I don't believe people should be discriminated against."

He went on to note that same-sex marriages aren't good for children: "I just believe that marriage between a man and a woman is ideal. It is such a unique union, and it is absolutely essential to the future of humanity."

View the image, which can also be found on page 13 of Family North Carolina, below: 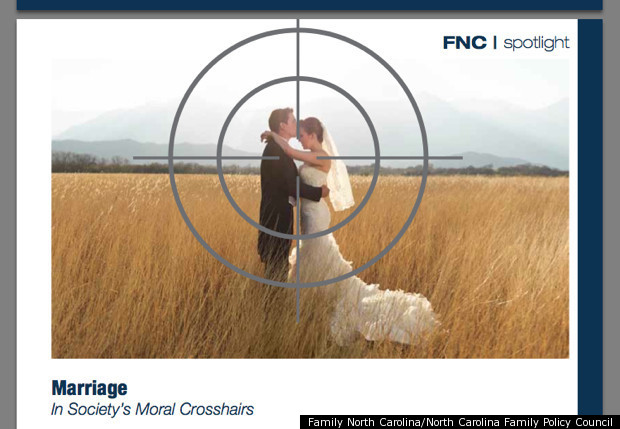