The Washington Post and ABC News (video) are reporting that two North Carolina teens have been charged with manufacturing and possession of child pornography because they have naked pictures of each other on their phones. The teens are now 17 (they were 16 at the time) and they are old enough to be charged as adults. Had they been 18 it would not have been considered child porn and charges would not have been filed. Sixteen is also the age at which kids can have sex in North Carolina. As Dan Abrams said on ABC's Good Morning America, they could look at each other naked but they can't share pictures of each other in that state.

Because they are being charged as adults, some media outlets are disclosing their names. I'm not.

Child pornography laws were designed to protect children from predatory adults. They were never intended to prosecute teens for sharing images of themselves. This is a disgraceful use of prosecutorial powers. There are situations when it is appropriate to prosecute around sexting images, but these are cases where they are distributed without the subject's consent or cases where an adult has solicited images of children. So-called sextortion is a serious offense when someone uses a nude or sexually explicit image of another person to extract money, sex or something else from a victim. But two teens voluntarily sharing images of themselves -- regardless whether it was a wise decision -- should not be a crime.

In 2011, Janis Wolak and David Finkelhor of the Crimes Against Children Research Center at the University of New Hampshire has published a Sexting Typology that broadly divided sexting into two categories: 'Aggravated' and 'Experimental'. "Aggravated incidents involved criminal or abusive elements beyond the creation, sending or possession of youth‐produced sexual images," wrote the researchers. These include adult involvement, criminal or abusive behavior by minors such as sexual abuse, extortion, threats; malicious conduct arising from interpersonal conflicts; or "creation or sending or showing of images without the knowledge or against the will of a minor who was pictured." Experimental incidents occur when hyouth take images of themselves "to send to established boy‐ or girlfriends, to create romantic interest in other youth, or for reasons such as attention‐seeking," with no criminal intent. 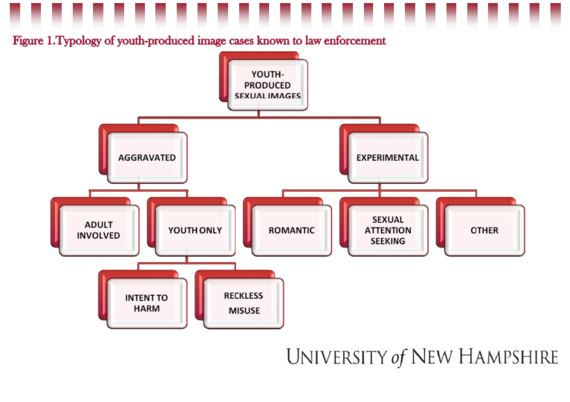 Still, teens and parents need to know about the possible implications of sexting which is why ConnectSafely has published Tips for Dealing with Teen Sexting.